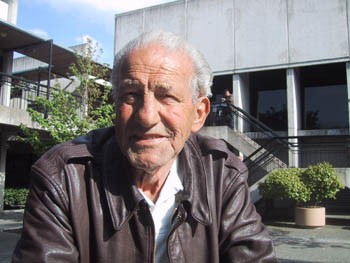 Dignity of Man: Seventy-year-old Ken Hart has made an art of citizen public appearances at city council meetings.

The art of the citizen public appearance

On the second Tuesday in April, Ken Hart stood quietly before the lectern in the Santa Rosa City Council chambers, a baseball, a tennis ball, a golf ball, a ball of yarn and a folded American flag placed neatly in front of him, waiting patiently as the councilmembers took their seats. Former mayor and current councilmember Mike Martini shook Hart’s hand as he passed by the lectern. Mayor Sharon Wright blew him a kiss as the meeting was called to order.

“I bring these with me each time I get up here,” Hart began, indicating the objects before him, then holding up the ball of yarn. “This is the last one, from Star Man.”

Star Man is one of several alter egos Hart uses when speaking before the council. Sometimes he’s Dignity of Man. Sometimes he’s just plain old Ken Hart, a 70-year-old who claims he’s lived on the streets for the past 25 years. But homelessness has not stopped Hart from attending city council meetings–no matter what city he finds himself in–and using the time councils set aside for public comment to voice whatever’s rattling inside his head.

On this particular day, Hart was concerned with the recent news that a Native American tribe had purchased land for a proposed casino in Ukiah. Never mind that the issue might have been better taken up with the Ukiah City Council. Hart was in Santa Rosa, and he was determined to let someone know how he felt about the issue.

“A couple of months ago, I spoke about my dislike of building a gambling casino in the Alexander Valley,” he said. “The thing that bothers me [about the proposed casino in Ukiah] is that the casino is right across from the high school.” It was only a matter of time before the North Bay would be filled with gambling houses like in Vegas and Reno, he insisted. “I’m against it, and I hope you are too,” Hart told the councilmembers. “But money, God bless the devil, you’ve got to give him his due.”

It would be easy to dismiss Hart as being mentally unstable. For at least the past 15 years, he’s been regularly showing up at Santa Rosa City Council meetings and making such pronouncements. More often than not, he tends to speak about recent events that have directly affected him, his health (which appears to be robust) and his spiritual well-being. Hart himself admits that his behavior is unusual. “You got to be crazy to do what I’m doing,” he said quite lucidly after the meeting. “But it’s a calling.”

Hart isn’t the only person in Sonoma County who’s heard the call. There’s a handful of people who’ve been showing up at city council for years to voice their opinions, regardless of whether their opinions pertain to council business.

Santa Rosa resident Steven Lightfoot’s calling may be the most bizarre. From the moment John Lennon was killed by deranged gunman Mark Chapman on Dec. 8, 1980, Lightfoot has suspected a cover-up. On his website (www.lennonmurdertruth.com), he presents evidence that has convinced him Lennon was assassinated by horror writer Stephen King, with assistance from the Reagan administration and other government officials. Although Hart hadn’t seen Lightfoot at a council meeting for several weeks, Lightfoot has frequently shown up over the years to expound on his theory, which no one has apparently taken very seriously.

Frequent council-goer John Jenkel is slightly more grounded than Lightfoot. Jenkel gained much notoriety last year for the large anti-Bush protest signs he erected at his ranch outside Sebastopol (“Sign Language,” July 31, 2003). The architect of a byzantine conspiracy theory that links former San Francisco mayor Willie Brown, Enron CEO Ken Lay and President George W. Bush to the 9-11 terrorist attacks, Jenkel began attending San Francisco City Council and Port Authority meetings back in 1996 after losing his permit to operate a horse carriage franchise in the city. He blamed the loss on Brown and has been on the former mayor’s case ever since.

To this day, Jenkel and his paid volunteers turn up in city council meetings across the county, urging councilmembers to support House Joint Resolution 20, a little-known bill that would repeal President Bush’s first-strike doctrine. Jenkel claims that 18,000 people have signed his petition so far, including Democratic presidential candidate Dennis Kucinich. So far, no city councilmembers have signed on, but Jenkel remains optimistic. “There won’t be anything left of the Republican Party when I’m done,” he says in a telephone interview. “A Republican won’t be able to run for dogcatcher.”

Of all the people who show up at city council meetings to voice their opinions, Santa Rosa resident Jack Osborne, 81, most closely fits the definition of political gadfly.

“I’ve gone every week for about 20 years,” says Osborne, a former state appraiser who tends to stay on-topic more than his cohorts. “When I retired from the state, we always used to complain about what the city council did, so I decided to go down and see what they do.”

Osborne claims he’s brought the Santa Rosa City Council “up to speed on the Brown Act, because they didn’t know what it was.” The Brown Act governs when city officials must hold open meetings. Osborne and friend Jeff Johnson delight in picking through the minutia of such laws and finding apparent discrepancies, which they then use to torment local officials.

“Only two people in Santa Rosa care about these issues, me and Jeff Johnson,” Osborne says. “I’m kind of an iconoclast. I don’t believe in a lot of the things that other people believe in. It keeps me alert.”

While Hart, Jenkel and Osborne have become acquainted after years of attending city council meetings, no lasting friendships appear to have developed.

“I’ve sat right along side him [Hart] for 15 years, but I don’t know him,” Osborne says. “He recently told me he finally got his veterans compensation, so that’s good.”

“Unfortunately, Ken wastes the time of a lot of people because he talks about things that aren’t pertinent to today’s issues,” Jenkel says. He’s particularly miffed that neither Hart nor Osborne will sign his petition. “They’re both Christians!”

“I get along with him, but we’re opposites,” Hart says of Jenkel. “I was never a troublemaker. He wants to tear the house down.”

If any one of them has won over the Santa Rosa City Council, it’s Hart. “He comes in early, greets everybody in the front office, grabs a piece of candy and fills out his registration card,” says city clerk Sue Stoneman. Several years ago, she said Hart used to perform his three-minute speech–the time allotted for public appearances– to guitar accompaniment provided by a friend. “For me, he’s one of the highlights of every council meeting. I always enjoy whatever he has to say.”

When he’s not pontificating at city council meetings, Hart said he combs the streets, helping alcoholics and drug addicts. After the meeting, he carefully placed the baseball, the tennis ball, the golf ball, the ball of yarn and the folded American flag in a black plastic garbage bag he slung over his shoulder. Then he prepared to look for a place to sleep that night.

“God takes care of me,” he said. “I have a good heart. I’m doing what I feel is right inside.”