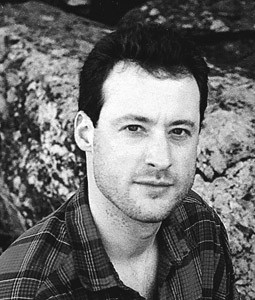 Mise En Plate: Andrew Todhunter learned how the kitchen worked before he ate there.

It started with a beer.

Andrew Todhunter, an American journalist based at the Sea Ranch, wanted to meet Gilles Bajolle, a French pastry chef based in Paris. Why? It seems Todhunter, a Francophile, food enthusiast and author typically more comfortable with extreme sports, had this idea for a book about eating. A whole book about one meal.

So he called up the affable Bajolle and asked him out for a beer. A few weeks later, Todhunter, who has no formal training as chef or cook, was working in one of the world’s greatest restaurants, Taillevent, as an apprentice–an apprentice, mind you, with no real idea what he was doing and who mostly tried to stay out of the way of the chef. He describes himself as being a sort of traffic cone in the kitchen.

Somewhat of a traffic cone in the kitchen myself, I got a big idea of my own that also started with a beer. OK, not a beer, but a drink with similar disassociative properties. Cocooned in a politically correct safe haven of low-fat grilled snapper, Atkins low-carb bars and organic frozen dinners, I’ve avoided learning to make a decent béchamel for far too long. Now nestled in the bosom of my 30s, I’m ready to embrace my inner Julia Child and welcome the stench and ooze of a ripe Camembert into my kitchen.

Arming myself with a $100, a yellowing Time-Life copy of Classic French Cooking, my Food Lover’s Companion (to translate), a few recipes from Epicurious.com and a copy of Todhunter’s book A Meal Observed (Alfred A. Knopf; $23), I’m ready to embark on my own adventures in classical French cooking. Frankly, I’m frightened and need another drink.

Though he doesn’t know it, Todhunter is the inspiration for my misguided attempt at cooking á la Française. In 1999 he spent four hours eating the most exquisite dinner of his life at what is arguably one of the best restaurants in the world. The resulting book recounts each torturous decision on what to order, the wonders and disappointments of the meal itself and pithy vignettes of his three-month apprenticeship at Taillevent. Woven throughout are memories of food and eating recalled from a lifetime of meals.

Lacking a private jet and the 600 bucks to experience Taillevent for myself, I attempt the next best thing: to create a meal that is in some small way Tailleventesque. I want to see, smell and taste for myself what Todhunter tasted. I want to try to recapture the feeling of this magical French meal. I want to know just how stinky his Pont l’Eveque cheese really was.

This cooking attempt, of course, is utterly ridiculous on multiple levels, the least of which is my pathetic inability to translate the difference between pâte à choux and ecrevisses à la nage. The most significant failure may be the fact that I am not, in fact, a chef and my main audience will be my seven-year-old son and elderly grandmother. Undeterred, I figure I’m ambitious if nothing else. I need another drink.

Todhunter calls my cell phone the morning after my Great French Cooking Experiment. After eight hours in the kitchen and one at the table, I’m still mentally suspended in a buttery food coma. The locker-room quality of a Pierre Robert cheese burns my nostrils as I spread a hunk on the last crumbs of bread, my eyes watering at the smell–a petit hair of the dog.

Through my cheesy, buttery haze, I begin to recount the meal. Ooohing and ahhhing in all the right places, Todhunter is a willing and enthusiastic audience. I describe grocery baskets full of cheese, butter, cream, meat and various leeks and onions. I recall the puffy Gruyère gougères for the amuse-bouche (an appetizer Todhunter shared with his wife at Taillevent) and my hors d’oeuvre of asparagus soup with caviar, avocado and crab timbales (from a Fleur de Lys recipe). My plat (or what we call the entrée) was a tangy prune coq au vin followed by a cheese course and the pièce de résistance, a chocolate marquise for dessert (which Todhunter also ate at Taillevent).

We share disappointment over not finding pistachio paste here in the North Bay and the eternal search for great cheese. In cooking this elaborate meal at home, I’m hoping to somehow equate his experience and mine, tying the two together. In the retelling, we are two chowhounds salivating not over the bone, but the savory marrow within.

And my cooking wasn’t too shabby, either. At least that’s what my grandma said.

As he recounts in A Meal Observed, Todhunter grew up not in a family of enthusiastic eaters, but quite the opposite. His mother made the cardinal sin of serving small portions and generally found eating to be an annoyance rather than a cause for celebration. Not until later in life, pausing to reflect on certain happy moments in his gustatory experiences (a teenaged girl making him a deli sandwich) and having his first true French dining experience, did his eyes open to the possibilities. He suddenly became a “foodie,” yet, not a foodie.

Todhunter is leery of the ubiquitous term used by many to describe their nearly insane passion for all things edible. Certainly, food is manna for him; food is life, love and comfort–a subject of great introspection. But the term “foodie” can come off as a little, well, irritating.

“I have a lot of friends who are foodies,” he says, disdainfully. I know the type: thistle-and-dandelion-greens-in-their-teeth purists who won’t shut up about their last meal with Mr. Keller.

But anyone who writes 228 pages about a single meal? Sorry, Andrew. Like it or not, you’re a foodie.

What lifts the meal from plate to imagination in A Meal Observed are the characters of the kitchen: the effusive Bajolle; the prickly, exacting chef Philippe Legendre; the egotistical and much-disliked restaurant owner Jean-Claude Vrinat. Even minor characters, like the lifelong dishwasher, the coat-check girl and the American pastry intern, have a story to tell. Each of them somehow contributes to the final dining experience, either as a part of the clocklike service or behind the scenes in the kitchen.

Unlike many American kitchens, Legendre’s is one of repetition, precision, perfection. There are no celebrity cooks or variations from the menu. There is little creativity, though the meal is vastly creative and spectacular in its own calculated way. The meal is a group effort, from the garde manger to the grill station, delivered exactly as it was yesterday, the day before and two months ago.

The tension between kitchen and management is palpable and it comes as little shock that soon after Todhunter’s apprenticeship, Legendre, Bajolle and much of the kitchen staff exited en masse.

Unfazed, the restaurant has kept its three-star status. The meal must go on.

What A Meal Observed ironically lacks are descriptions of the food itself. For someone who is passionately waiting for that French-food kiss–the soulful, almost sexual recitation of a particular dish’s textures, flavors and mouth feel–Todhunter’s descriptions are remarkably flaccid. He makes up for the deficiency by delivering lengthy recitations on the history of cheese, sea salts, wine regions and the process that goes into Bajolle’s pastry creations. The research and background make for interesting “foodie” reading, despite sometimes taking away from the narrative of the story.

At the end of it all, however, A Meal Observed isn’t just about food, but about a sense of place, a moment captured that can never be recaptured or replayed. It is about the transient nature of food, art and, ultimately, us.

Bajolle says that he is always willing to give out his recipes, but that no matter where they are made, they will never be the same as those he makes in the restaurant. He is right. I can follow his recipe exactly, but my butter is ultimately American, my chocolate American, my cream and eggs, also American. They lack the terrior–the specific flavor of a region or place–that make that experience so uniquely there.

The magic of a meal, be it at Taillevent or at home, is ethereal, a vapor too soon vanished into memory. At least that’s what I tell myself as I drink the last sip of wine left in my glass, warm, contented and full.