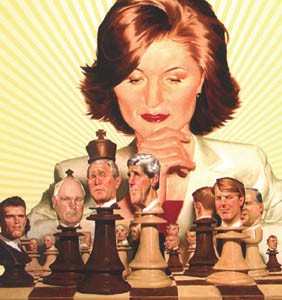 One pundit’s call for a new and improved progressive America

The following selection is excerpted from Arianna Huffington’s latest book, ‘Fanatics and Fools: The Game Plan for Winning Back America.’ Huffington appears at Book Passage on Friday, April 30, to read from and discuss her vision for a new America.

We are, undoubtedly, a nation divided. And a nation divided cannot stand, let alone move forward. But it can, paradoxically, as we’ve seen in the last three years, move backward.

Great social movements are not sparked by subtle shifts in policy or retooled versions of familiar proposals. Nor are they sparked by attacks alone. Ushering Bush out of the White House in November will take more than a critique of his failed policies–and more than a new and improved prescription-drug plan for senior citizens.

We need to offer an overarching moral vision for America that is the alternative to the conservative movement’s Leave-Us-Alone Coalition. My response to the Leave-Us-Alone Coalition is simple: Sorry, no can do. We are all in this boat together. And the fact that there isn’t a hole at your end of the boat doesn’t mean you are safe.

The vision of all of us in the same boat together is the founding vision of this country. Even before there was a United States of America, when John Winthrop landed in Massachusetts Bay in 1630, he stood on the deck of the Arbella and gave a speech that gave voice to what would become the central American creed: “We must bear one another’s burdens . . . we must be willing to abridge ourselves of our superfluities, for the supply of other’s necessities.”

This is the heart of what this country is about. And the exact opposite of the Republican messianic vision of national salvation through ever bigger tax cuts. But let’s not fool ourselves. This call to worship at the church of tax cuts, while very destructive, has also proven incredibly alluring: it’s clear, it’s broad, and it’s accessible.

That’s why we must present a bold alternative vision that is equally clear, broad, and accessible. One that answers a larger question than simply, “Do you want to keep more of your money?”

Just after Christmas, I was having dinner at a noisy Japanese restaurant in New York with some close friends. Their 11-year-old son is passionately committed to George Bush’s reelection. Constantine engaged me in debate with an enthusiasm I could only admire.

“Arianna,” he said with the enchanting optimism of an 11-year-old, “I’m going to convince you that you should support Bush in November. Here are two questions you have to answer. The first question is: Are you for more or less taxes? The second question is: Do you want to fight the war on terrorism?”

My first thought was, hats off to George Bush. He and his team have done such a masterful job of framing the 2004 election that even an 11-year-old can be perfectly on-message. The Democrats cannot win in November if that remains the framework for the election.

We need to change the questions, not just give the correct answers. And the questions have to be about what kind of America we want to live in.

This is what I would ask Constantine–and Americans of all ages:

“Do you want to create an America where your taxes guarantee you a safe neighborhood, a good school, healthcare and a safety net if you stumble?”

“Do you want to be safe in your own country, or do you want to waste precious lives and resources on military adventurism?”

“Do you want to live in a country where our leaders respect us enough to tell us the truth?”

“Do you want to create a country where programs for the most vulnerable are not the first to be cut when times are tough?”

“Do you want to live in a country where the number of poor people is getting smaller rather than larger?”

“Do you want to create a country where hard-working Americans are put first–and ‘trickle-up’ not ‘trickle-down’ is the economic order of the day?”

“Do you want to live in a country where huge industrial companies can’t buy the right to pollute our air and water?”

“Do you want to create a country where the rules are the same for the rich as for the poor?”

There are four overarching elements to this vision of America: (1) It’s based on the values that have served as the foundation for every great social breakthrough in American history. The Emancipation Proclamation. The 19th Amendment. The New Deal. The Voting Rights Act. The Clean Air Act. The Americans with Disabilities Act. These are all milestones on our journey toward a just society, and they all represent values held dear by most Americans. Values not founded on questions of right or left, but on questions of right or wrong. These milestones were all once considered unthinkable–until society realized they were right. And inevitable.

(2) This vision responds to the real hunger in this country to be part of something larger, something better. I believe the country is so longing for this that I consider an appeal to idealism the sleeper issue of 2004. Instead of censoring, editing, mitigating and homogenizing the progressive message to appeal to the 4 percent to 6 percent of swing voters, we must let the message be bold, inspiring and appealing to the 50 percent of voters–100 million of them–who have given up on voting. Instead of slicing and dicing our message, let us appeal to the better angels of all Americans, including those who are now sitting on the other side of our House Divided.

We are all–even the very best of us–a mixture of good and evil, of self-interest and generosity. For our movement to change America, we need to appeal to what is best in people, and trust that they will respond. This trust, and the reason I am so optimistic about this vision, is because of my ultimate faith in human nature. Goodness, empathy and engagement in building community often begin in small steps. And then people begin to see themselves differently.

But remember, for years, for decades now, our leaders have pandered to our baser instincts and our empathetic muscles have atrophied. Even after 9-11, when the longing to be called to a large, collective purpose was paramount, all we were called to do was to go shopping. But the generosity, selflessness and courage that emerged on Sept. 11 are still very much part of who we are.

(3) In politics, he who controls the language defines the political debate. We need to take back from the Bush Republicans certain magical words that they have appropriated and perverted: “responsibility,” “values,” “family,” “security,” “strength” and, yes, “morality,” which the right wing has reduced to sexual morality. Look at Wal-Mart, which considers itself so moral it made a huge fuss of pulling three men’s magazines off the shelf at the same time it treats women like second-class citizens, fires workers who try to unionize and is being sued in 30 states for refusing to pay overtime. We’ve come to the point where laddie magazines are immoral but cheating your workers is not.

We have to change this. And we need to start by taking “responsibility” back from the grossly irresponsible GOP. President Bush wants the nation to believe we can carry the burden of a worldwide war on terror and the Iraqi occupation while giving the richest among us a multitrillion dollar tax cut and the drug companies a huge new prescription drug benefit without cost containment. We can’t, of course, and we need to make sure Americans realize that before they vote in November. If we win this battle, then we’ll win the battle on taxes, a word that has become a synonym for evil. Because in a society where social responsibility thrives, education, healthcare and opportunity for all are not something we get to if we can, but a moral imperative.

When we articulate this vision, we move the game to our field. Right now, we are playing on George Bush’s and Karl Rove’s home turf, and therefore, we are playing defense, especially on the question of values, and particularly family values. We need to take back family values and we need to take back the language of patriotism–wrestling the flag from the hands of the Republicans who have desecrated it by using it to advance their tribal interests.

(4) The civil rights leader John Lewis once said: “When Robert F. Kennedy was assassinated, something died in America. Something died in all of us.” If that something is to be reborn, we must first dredge up something too long forgotten in our politics: heart. We must appeal to the compassion and goodness of America, and stir the souls of the people so that once again they will believe in the possibility that our country can change–rapidly and profoundly.

“In every dark hour of our national life,” said FDR, “leadership of frankness and vigor has met with the understanding and support of the people themselves–which is essential to victory.” And now, at this crucial point in our nation’s history, it is we, the people, who need to take the lead, challenging ourselves and each other to live by the values that came to the fore in the wake of 9-11: generosity, selflessness and courage.

These, of course, are very big dreams, but anything smaller guarantees the reelection of George W. Bush.