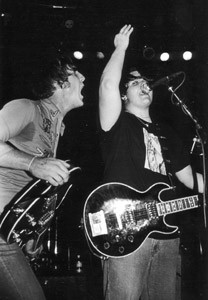 Before I ever saw the Bad Kissers, I kept hearing that they were some kind of ’80s revival band, complete with synthesizers and Heart-style harmonies. As the band’s soon-to-be-released debut album, We Were Here Once as Friends (FunRun), shows, the rumor is mostly true. What’s funny, though, is that no one in the Bad Kissers–on the cusp of a West Coast tour–has ever heard of the ’80s group they’re opening for in San Francisco.

“I think you’re the only one we’ve talked to so far,” remarks keyboardist Niki Marie, “who’s ever heard of Gene Loves Jezebel.”

The Bad Kissers practice in a tiny room in an old Victorian house in downtown Santa Rosa. The closet is filled not with clothes but with guitar cases and a battered keyboard. The built-in hutch holds extra extension cords and guitar cables. It’s so cramped in here that bassist Anne Ostrowski has to perch on top of her amplifier. From my low vantage point, I have an unusually keen view of the Bad Kissers’ footwear, ranging from white penny loafers to black socks to bare feet.

As the band rehearse, I realize why the Bad Kissers have played so many house parties: it is because nowhere do they sound more like the perfect rock and roll band than in a small, overcrowded bedroom. In larger venues, the band have yet to live up to the majesty that their music requires, but if you want the real deal, invite the Bad Kissers over to play in your laundry room.

Singer and guitarist Ash Scheiding has lived in this house for three years now, and settling into the couch to chat after practice, she feels completely at home. “This house has been through so many people and so many crazy times and events,” she explains. “I’ve learned almost everything that I’ve needed to learn in my adult life at this house.”

Indeed, almost every time I’ve ever stopped by, the porch has been full of people hanging out. I first met Scheiding in her days with Escape Engine, a local band that eventually changed their name to Fight Like Fight, recorded an album and promptly broke up. Scheiding wasted no time putting together a new band, and she had a few ideas about what she wanted to be different.

“I knew I wanted something else besides just guitars,” she says, referring to the Bad Kissers’ synthesizer-driven sound. “I also wanted to be a lot more vocal-based with more harmonies, and having females in the band, I thought, was really important.” Her new band’s lineup is predominantly female, and the working environment, Scheiding says, is much more fluid.

It shows. Whereas Fight Like Fight’s music seemed overly centered on feeding the band members’ various short attention spans with too many changes and quirky time signatures, the Bad Kissers know that musicianship isn’t the only key to being a good band. “There’s nothing like a good pop song,” Scheiding gushes, “no matter how technical or talented you are.”

What has remained, to great effect, in the new band is Scheiding’s expressive lyrics and her bone-chilling, dynamic vocals; when Scheiding opens her mouth to sing, you’re as likely to get a soft, sweet sound as you are to get the vocal equivalent of an attacking cobra.

“I realized in high school that I didn’t want to sing in ‘church voice’ anymore, that I wanted to really use my voice,” she says. “A lot of female vocalists, especially in the indie rock scene, just don’t hammer it that hard vocally, and that’s just boring for me.”

After a short tour, the Bad Kissers return to celebrate the release of We Were Here Once as Friends at the Phoenix Theater, and to further endure the never-ending questions about the band’s name. Are the Bad Kissers, everyone wants to know, actually bad kissers?

The answer is no, not really: they’re disastrous kissers. Believe me, I’ve seen the photos.