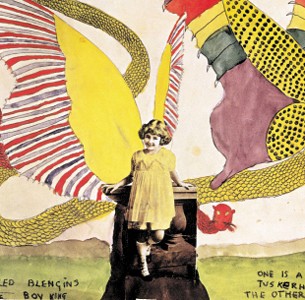 ‘In the Realms of the Unreal’

Abbieannian Crusader: Darger’s private world was revealed at his death.

Henry Darger’s story is one of silence, exile and cunning. In his one-room apartment, Darger (1892-1973) created a prodigious graphic novel, 15,000 pages long. He wove this life’s work from personal experience, from his interest in the American Civil War, from advertisements, coloring books and children’s books. The Wizard of Oz series by his fellow Chicagoans L. Frank Baum and John O’Neill went into the mix. Finally, Darger varnished his creation with a heavy overlay of good old-fashioned Catholic repression.

To passersby, Darger would have been as colorless as a cave cricket. He was the proverbial little old man in a trenchcoat, so reclusive that there’s still argument over whether his name was pronounced with a hard or soft g.

Darger’s epic work is a hallucinatory war story between two feuding planets. The Calvarinian child slavers are opposed by the planet Abbieannia and their female champions, the seven Vivian girls: “Their beauty could not never been painted had they been seen for real, [sic]” he wrote. The many years of war between child-abusing Calvarinian atheists and the devoted Abbieannian Christians is bloodier than a “thrillion” (Darger’s word) Gettysburgs. But there are idylls between the battles–respites in gardens of colossal flowers, with tame armadillos, kitten-headed dragons and fairy girls with butterfly wings or curled horns like rams on their heads.

Using 3D animation, Yu brings Darger’s drawings to life. The reliable character actor Larry Pine does the voice of Darger–here he sounds like a cross between Jason Robards and William S. Burroughs. Dakota Fanning is his co-narrator. Fanning can be the most calculating of child actresses–she shows off her armor-clad cuteness in I Am Sam and elsewhere. Here, she provides an intelligent child’s voice. She disarms us, implying a childishly innocent context for Darger’s dark side, the hell-is-for-children war atrocities that the evildoers inflict on the Abbieannians.

Darger’s illustrations of naked children under torture raise the question of just how innocent Darger was when he dreamt of his girls with little-boy genitals. Yu parries the suspicion of pedophilia in several ways, stressing Darger’s own abused childhood at Catholic orphanages and at the Illinois State Home for Feeble-Minded Children. In Darger’s day, images of naked kids were common in advertisements and in kitsch newspaper photos.

It’s also possible Darger only had a speculative idea of what sex was. (“I really don’t think he knew the difference between boys and girls,” theorizes Darger’s former neighbor, Regina Waters.) Finally, he was an obedient and faithful Catholic, who claimed the Vivian Girls could only be approached by someone in a state of grace. Yu comments, “I decided early on not to include any art experts or psychologists; when it comes to Darger, we’re all guessing, anyway.”

Yu has to be one of the few who has read the entirety of The Story of the Vivian Girls, and that qualifies her as an expert. She previously directed Breathing Lessons: The Life and Work of Mark O’Brien, an Oscar-winning short about a poet confined to an iron lung. Darger’s confinement was almost that total. His life recalls Hamlet’s line, “I could be bounded in a nutshell and call myself a king of infinite space.”

On his death bed at 81, Darger got a lone word of praise for his art. His response was tart: “Too late.” It’s an obvious irony that his talent should be revealed after his death. Worse, perhaps, is the thought of those recluses who don’t have landlords as sensitive to creativity as was Darger’s own unofficial curator, his landlord Kiyoko Lerner. Dumpsters must be brimming with the art of such hermits as purely, madly obsessed as Darger was. You don’t need an imagination as fevered as his to guess what a loss that is.