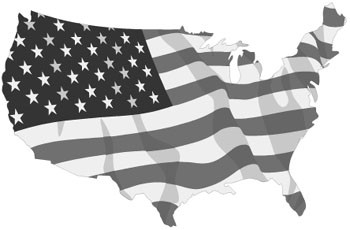 Long May It Wave

A new patriotism: Why I fly the flag

IN THE AFTERMATH of the attack on the World Trade Center people all across the nation are displaying the red, white, and blue. Out of patriotism, pain, and frustration they are showing the flag to proclaim their solidarity and love for this great nation. I am one of those people. An American flag hangs from the front of my house and another on the antenna of my truck. I am an American, born in Michigan 51 years ago. I am an ex-Marine of the Vietnam era. My country has been attacked. We are at war and I want to help fight the enemy.

I want justice and I want the real enemy, when found, to pay dearly.

However, in rooting out the terrorists we must also root out the truth about our own contributions to terrorism. We must ask why we were once the allies, of Osama Bin Laden and Saddam Hussein. And we should remember we are the only nation to have subjected another to atomic terror. We dropped the bombs on Hiroshima and Nagasaki, killing thousands of women, children, and old men, and just as with the World Trade Center killings, no distinction was made between young and old, combatant and noncombatant, innocent or guilty.

At the same time we should remember what has made us great. We are a nation of religious freedom. We rescued Europe from the Nazis. We are the nation that exposed the intellectual bankruptcy of communism, the nation that gave and continues to give haven to the hungry and persecuted. We are the nation whose science and medicine have saved millions of lives and made life better for countless peoples. We have much to be proud of and thankful for. But we should never forget that “pride goeth before a fall.”

In this time of sorrow and anger, we must not allow wounded pride and self-righteousness to motivate our actions. If we hope to rise above our reptilian impulses and not be blinded by our own unexamined theistic and political sureties, we must question everything we believe to be true.

Such questioning will be discomforting, but the alternatives of ignorance, unquestioned obedience, and zealous surety can lead only to the kind of fanaticism we have just been the victims of.

There are reasons that many people throughout the world hate the United States and it behooves us to ask why. Not all of those who despise us are ignorant, crazy, or envious. We would be wise to really listen to what these folks are telling us. And we would be even wiser to let humility, honesty, and love become the cornerstones of our learning, healing, and future.

IN THE WAKE of this attack, it is apparent we can be hit and hit massively. In fact, we have no way to know what form future attacks may take. And there is simply no way to prepare for every possibility. So in our quest for security it is essential we not forego the principles of democracy and the very rights that have made this nation the envy of the world.

Now is the time for every citizen of the United States to read and re-read the Constitution so they will truly understand what is at risk. Suffering some inconvenience for increased security is one thing. Giving up any of the rights guaranteed us by our Constitution is tantamount to surrender.

I fervently hope our leaders realize that all that may be inferred from seeing so many star-spangled banners flying across this land and throughout the world is that many, many people love this nation. It would be a mistake to interpret this display of love and patriotism as tacit approval for any particular response to terrorism or the curtailment of any constitutional rights.

The war we are entering will not be a neat and tidy affair. There will be regrettable accidents and mistakes. Innocent people will be hurt and killed. That is the way of war. It is always brutal, ugly, and inhumane. But the perpetrators of the atrocity in New York cannot go unpunished. To allow that would dishonor those who were killed, their families, the people of this great nation, and freedom-loving people everywhere.

We are morally obligated to respond, and we will. And our actions should be as powerful and painful to the enemy as is necessary. But when we respond, we must make every effort to do nothing that will dishonor the people of this great nation, the Constitution, or the principles on which our nation is founded.

The United States of America has never been perfect, but more often than not it has tried to do the good and honorable thing. In the end our good has substantially exceeded our bad. And this is why the American flag remains the world’s leading symbol of honor, decency, hope, courage, and human rights.

And it is why I will continue to fly Old Glory.