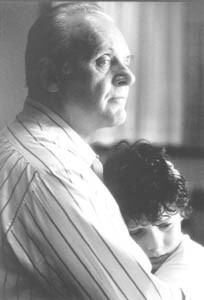 IT’S HARD to figure out how audiences will react to Hearts in Atlantis. On the one hand, we’ve been softened up by recent terror and are ready to have the nostalgia nerve pinched. On the other, this film is very close to the dregs of the bottomless barrel of Stephen King, upon whose book Hearts in Atlantis is based.

Here King is working in the Norman Rockwell field, in a story that crosses Needful Things with Stand by Me.

In 1960, in a New England town, the fatherless boy Bobby Garfield (Anton Yelchin) is being raised, sort of, by his mom Liz (Hope Davis, better than her role). A world-weary stranger named Ted Brautigan (Anthony Hopkins) moves into the apartment upstairs. He turns out to have the gift of second sight and is a fugitive from mysterious pursuers.

Events come to a head when Liz leaves her son for a weekend, despite her suspicions that the old man might be unnaturally fond of boys. (The fact that she suspects such a thing proves what a silly creature she is.)

Hopkins can be an evil delight, as we’ve seen when he’s played Dr. Lecter or Picasso, or in the mad scenes in Titus. He can also be Sir Anthony Hopkins, living embodiment of a stale theatrical tradition that always seems like class to American (or in this case Australian) directors. Here, mostly he’s the latter.

Hopkins is impressive in a pair of scenes: one, a little monologue about the last touchdown of football great Bronko Nagurski; second, in the most typically Stephen King moment in the film, when he uses his gifts as a psychic to cow a neighborhood bully.

It’s actually David Morse who gives the most memorable performance. In the film’s opening and closing sequences, Morse plays the elder Bobby, forced by a funeral to revisit his lost past. Morse emotes the anger and confusion of grief beautifully.

And to his credit, director Scott Hicks (Shine) does tend to dry up this wet material, though Hearts in Atlantis is overproduced to the extreme. Occasionally, Hicks recalls director Terrence Malick in passages of afternoon reveries, wind chimes on the front porch, a farewell scene first half-hidden and then eclipsed by white sheets on a clothesline.

In one moment, Hopkins quotes Ben Jonson on the subject of time, “the old, bold cheater.” Screenwriter William Goldman (The Princess Bride) is as old and bold and cheating as anyone in the business.

Some may swallow the film’s “truths” whole: that childhood is our happiest time, a fabulous land like Atlantis, and all else is ashes. Our first kiss “is the one you’ll measure all others by” (what, that dry smooch with Sandra Baldwin? She was 6 years old and had a lazy-eye patch!). Finally, that a negligent mother ought to watch her step.

There are neither enough supernatural or film noir elements here to disguise the sour tastes of Goldman’s moralizing, or to hide the film’s grim approval of the way Liz gets a harsh lesson on the importance of being a stay-home parent.