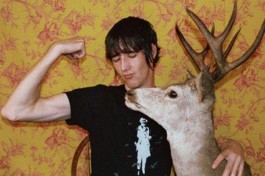 No matter the band, the topic of conversation these days is the same. “Hey, are you finished recording?” “Where did you guys record?” “How many songs did you record?” It’s the same conversation on a repeated loop effect, with slight variations. Everyone, it seems, is recording.

While home-recording computer programs offer a cheap and accessible option to bands short on money, and with established recording studios offering high-quality production at competitive rates, there’s a flurry of local recording in the North Bay’s underground music community. In fact, this is destined to be a banner year for local indie music. Here’s some of the talk around the recording grapevine.

Insomniac power trio Polar Bears experienced connections to their Arctic Circle namesakes while recording The Future King this year. Spotted in the studio parking lot, departing after the morning sun came up, band members appeared fully unaware that nighttime had happened at all. If that’s not a recipe for insanity, then I’ll eat Alaska. But when’s the album out? “You can say. . . in the fall,” says guitarist Matthew Izen. . . .

From the Spinning Frustration into Gold Dept.: In the middle of the night at Prairie Sun, John Courage turned off all the lights for a “good old-fashioned, demon-possession freakout,” replete with snarling, howling, flailing and trying to light things on fire. Luckily, the engineer had the tape rolling and the crazed sounds found their way into the final mix, alongside the rattling of a 40-pound chain, a toy piano and bottle-cap tap dancing. The impending album is called Murder of Crows. . . .

On the other hand, home recording, with its comfortable surroundings, tends to be event-free. When Archeopteryx recorded the mammoth 10 Years of Friendship in their living room, did a serial rapist, for example, came to the front door dressed in a clown outfit and demand to scream on a few songs? “Nah, actually, nothing like that happened,” reports drummer Devon Rumrill. “It was all pretty normal.” . . .

Meanwhile, Furlong have taken full advantage of the educational system by recording four songs for frontman Elliot Whitehurst’s senior project at Sonoma State University, including the soon-to-be-classic, “God Damned Blue Man Group Stole My Favorite Jacket.” I’m not making this up! Expect either an EP or a full-length within the year. . . .

The New Trust, who appear increasingly terrified of zombie attacks, promise that while recording an upcoming full-length album for Slowdance Records, “there will be no less than four machetes in the studio at any given time.” These women and men of action will be armed and ready with at least 16 new songs, including the heartwarming toe-tapper, “You’ve Got to Be Fucking Shitting Me.” . . .

Will anyone actually buy a cassette tape in 2006? Numbers Like Dinosaurs seem to hope so; the band members, all 18 and children of the CD era, are making a $2 two-song cassette of older recordings as a teaser for a new full-length release soon to come out on Chicago’s Grayscale Records. . . .

For We’re Afraid of Heights Tonight, all four members of the Rum Diary gathered in the kitchen around a metal chair made from car parts, beating it with mallets, and the labor-intensive mix with the Black Heart Procession’s Pall Jenkins was completed over the telephone. Says Daniel McKenzie, “Imagine never having met the person face to face, sending MP3s back and forth for 24 hours straight. It was crazy.” To say the least. . . .

Back in 2004, We Attack at Dawn recorded a demo called Do Us All a Favor And . . . , a tight and well-written collection of songs causing front-row sing-alongs at recent shows. Hey guys, do us all a favor–and get back in the studio! . . .

And finally, breaking up in style: Shortly before Petaluma hardcore duo Off-Kilter called it quits this year, they recorded a one-sided 12-inch LP. The clean side of the vinyl, with no grooves, will be silk-screened, and the resulting memento of the band’s eight years together will be given away–for free.