.I Broke Up the Band

On going from band-fan to band-wife, and bidding goodbye to an era 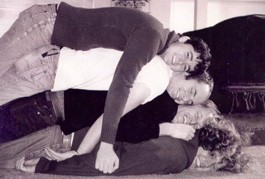 I am responsible for the breakup of Mr. Bir Toujour’s band of seven years. That’s an overdramatic way of putting it, true, but we are moving away–a few thousand miles away–and the move is my idea. With us will be Mr. Bir Toujour’s drum kit, as well as Mr. Bir Toujour himself. He used to drive an hour to get to Cotati for practice, but a three-day commute is slightly out of the question.

The move is an easy way out–not for us, but for the band, which, in band breakup terms, has died peacefully in its sleep. They lost their beloved, decrepit rural practice space and have not yet rallied to find another one. Seven years is a long time for any four-person collaboration to last. They had a good run.

Mr. Bir Toujour had been in the band for over a year when he and I met, and we have gone though our entire relationship so far in part defined by the roles of rock-band drummer and band girlfriend and then band wife. Mr. Bir Toujour disagrees, but I remain convinced that if not for my clumsy stabs at coquettish groupie behavior, we would not have started dating. My name will no longer be on the list to gain free admission to smelly clubs, I will no longer enjoy the occasional benefit of a spare drink ticket and I will no longer gaze at the drummer onstage midperformance and feel the rush of admiration and wonder at realizing that the talented man up there is my husband.

In the last few years those occasions have waned, mostly because I stopped attending their shows. In the beginning, when I was a fan and not a girlfriend, I went to all of their shows, and it was a magical thing–45 minutes of farfisa drones, sculptural guitar soundscapes and thundering percussion. Add a few pints of Guinness, and it was transcendent.

But the longer Mr. Bir Toujour and I dated, the less I got that feeling. I never figured out why. Maybe I was too close to the whole thing. Sometimes, I’d hop in the band’s cramped, rattling van and ride with them to shows in San Francisco, making for seemingly endless nights as I sat sleepily among spindly, half-broken-down drum hardware while Mr. Bir Toujour chatted with friendly members of other bands.

I used to be happy to do that, but then it became boring, and even if I carried my share of drums or amps, I started feeling like a fifth wheel, a hanger-on. I began driving to shows on my own so I could leave when the show ended, as opposed to at 3am. I stopped dressing fetchingly, instead arriving at clubs in whatever jeans and T-shirt I’d worn while cleaning the house that weekend.

And when the band played, it was fun, but I’d get distracted and look around, inspecting the reactions of other people in the crowd (or, sometimes, noncrowd). I got angry with myself, because even though I heard the music, I didn’t feel it. I gained a wonderful husband but lost a favorite band. There are far worse trade-offs.

Late this winter, the band stopped practicing on Wednesday nights, making their Sunday practice not only the main practice day for the week, but the only one. The guys were tired of rushing after work, fighting traffic and choking down fast food just so they could arrive at the practice space feeling surly before playing music for an hour or so.

They began turning down the thankless kinds of shows that once made up the bulk of their calendar dates–shows at communal, fire-hazard, loft spaces in Oakland, things like that. Their new album, which they worked very hard on, came out and the record label dropped the ball on promoting it–but so did the band. Instead of booking dates for a summer tour, they stopped practicing altogether. “We’re taking some time off,” announced Mr. Bir Toujour.

I’m guessing most bands end this way. They don’t implode in a scandal-streaked flurry of infighting, creative clashes and jealous loathing. The just stop. Slowly. The engine sputters, they pull over to the shoulder of the road and they silently agree to abandon the car (or van, as it were). After all of the time, money and heart the average band pour into their creative engine, it can be disheartening to see punky, scruffy-cute neophytes rapidly become the indie-rock toast of the town.

“Have you guys sat down and talked about what’s happening next?” I asked. Of course they hadn’t, because if they did, then it would be out there, dark and still like a dead bird. The band is over. Much easier instead to silently agree not to mention it and let the chips fall where they may.

So now we’re moving, and that settles it. Of course, they could always find a new drummer–alas, the poor drummer, the most expendable of band members!–but there’s no question that an era has ended. When people ask me what my husband does, I won’t have that private satisfaction of saying he plays drums in a band. Mr. Bir Toujour is nothing if not humble to a fault; he feels he’s a guy who plays drums, not a drummer, and in casual conversation, he downplays his musical activities. But I am more than happy to bring them up. “Joe’s in a band,” I say to strangers who ask what he does. His research job at a law firm is nebulous to me, but a band! Everyone can wrap their heads around that.

Someday, Mr. Bir Toujour and I will have kids, and I can play the band’s CDs and 7-inches for them and say “That’s your dad, that’s how we met. You see, once upon a time, your dad was cool.”

Of course, to me, he’ll always be cool.