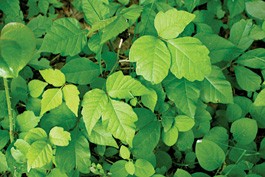 Tecnu Car: How that poison oak out on the trail can come home with you

The summer’s off to a good start if I’ve already been camping. Dropping all responsibilities, I headed to Point Reyes for backpacking, aching views of the sea and a hippie diet of nuts and berries. My camping partner, Willow, made me carry the heavy stuff because she’s used to car camping, and I had scoffed mightily at this notion. Oh no, I thundered, we would go out into the bush for days, filtering our own water, rationing food and cultivating our wild side. We did have a great time “out there” and saw amazing waterfalls, met fun fellow campers and didn’t rough it too much. But by day three, I knew I was in deep trouble.

I have a terrible reaction to poison oak. Now before you all twitter and giggle and say “Leaves of three” with condescending little nods, I’d like to say that without a doubt I know what poison oak looks like. OK? I know. I give every bush, every quivering leaf 10-foot clearance. I never go down a trail that hasn’t been mowed recently, and I step as gingerly as a goat on a crumbling Andean cliff. I think just looking at Toxicodendron diversilobum causes a rash to break out. Last time I got poison oak (I didn’t know it as well back then), my entire leg swelled to the size of an Iberian ham, and I wanted to amputate it.

So I was worried, lying there in my sleeping bag, regarding the little pus-filled things on my arm and, worse, the backs to my legs. (I figured it out later–sitting on the toilet! Sitting on the toilet was how I got those ones!) Willow, of course, didn’t have any poison-oak outbreaks, even though I witnessed her regularly tramping through the stuff. We had to evacuate. If I knew my body, we had 24 hours before I would go systemic.

When we emerged from the trail, I almost cried on the hood of my trusty car. Back at home, I doused myself with Tecnu and rubbed vigorously for what seemed like hours. I even got the Tecnu Xtreme, which exfoliates the urishol, the Satan-made chemical found in poison oak, out of your skin. Then I went to the doctor, because–who was I kidding?–Tecnu or no, I was going to get it, and get it bad. The doctor reminded me that I had to clean everything that had touched me–including my car.

I don’t have obsessive compulsive disorder, but suddenly I imagined that every surface of my car had microscopic urishol particles on it, ready to inflict more pain and suffering on me. I did what anyone would do in this instance: I spent five hours at the car wash.

According to the Palo Alto Trail Center’s poison-oak safety tips, I should have washed my car steering wheel and door handles on the inside and out when I got home from a camping trip. They also recommend placing a few newspapers on the car seat in order to save washing it later. But I’m short-sighted, and now I’m paying the price, because there was certainly poison-oak oil everywhere in my car.

I started by putting on vinyl gloves, the purple ones that we usually do dishes with. Then I sprinkled the entire interior with a custom blend of Dawn dishwashing soap, mineral oil and Tecnu. After it soaked in, I scrubbed and scrubbed and scrubbed, wet-vacuuming and repeating. Even the clean-car freaks started to stare at me–what invisible stain is this woman trying to efface?

I’ve never felt so crazy in my life, and all this was done under the hypnotic power of an elixir known as Prednisone. It reduces your immune system, and somehow convinces you that you might be Jesus. Hallelujah!