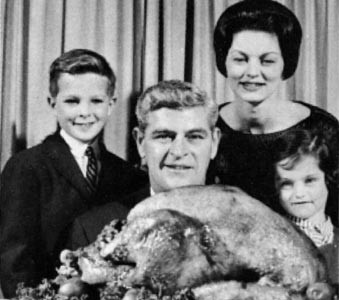 Flipping the Bird: The feast is the least of the story.

Think Thanksgiving is one giant Hallmark moment? Time for a paradigm shift

THE WAY white America envisions that first Thanksgiving, through a filter of sentimental hogwash, it went something like this: Plucky white Pilgrims–mostly guys–set out across the Atlantic Ocean and were rewarded with an entire continent of untold wealth that was essentially destined by the Almighty for their use. Oh, sure, there were a few unclothed savages already there, shuffling around in the dirt, slinging arrows here and there at equally filthy and equally wild animals, but that wasn’t really a problem. (Journals and letters written by those first settlers contain shameless accounts of plunder and theft of native stores of food, tools, and furs. If the Pilgrims found it, they took it.)

After working, praying, and surviving a bitter winter, the Pilgrim fathers brought in a bountiful harvest produced by careful tending of seeds they had brought from home. Inviting their heathen neighbors to join them, the Pilgrims gave thanks for their New World and its riches at a meal consisting of turkey, squash, mashed potatoes, cranberry sauce, and pumpkin pie. Afterwards, the men sat around smoking and watching football while the women cleaned up.

After two months and two deaths on the Mayflower crossing in 1620, the Pilgrims landed on the coast of Massachusetts, where an Algonquin-speaking group, the Wampanoags, lived. Clad in leather garments–augmented by furs during the winter–these native people skillfully cultivated corn, beans, squashes, and pumpkins; hunted the woods for deer, elk, and bear; and fished in the rivers for salmon and herring.

Like other members of what anthropologists now call the Woodland Culture, the Wampanoags looked upon deer, fish, and turtles as totemic siblings, and had deep respect for every natural creature. When they hunted, they left offerings for other forest inhabitants, and they would never think of planting or harvesting without giving ritual thanks for the fertility of Mother Earth.

Well, from where the natives sat–especially one named Squanto, who’d learned English after having been sold into slavery a few years earlier by another friendly white guy–these Pilgrims were in deep buffalo chips.

The wheat brought from Europe was completely unsuited to the New England soil and failed to germinate. Half the settlers died during the first winter. Many of the English were defiantly proud and refused to dirty their hands with planting. Most of them were incapable of successful hunting.

Squanto and his friends took pity on this sorry situation and brought venison and furs to the luckless Anglos. He taught them how to plant corn using fish as fertilizer and how to dig clams, tap maple trees for syrup, and essentially not be so clueless. Now the Algonquin tribes already had the custom of celebrating six different thanksgiving festivals during the year, and one of them just happened to coincide with the dinner party thrown by Miles Standish and company.

Standish invited Squanto and a few of his friends and their families to come on down and share a meal. Over 90 Indians–we’re talking extended family here–showed up. The Pilgrim menu wasn’t going to cover that many guests. So a few of the Algonquin guys went out for an hour and came back with five deer, enough for three solid days of cross-cultural feasting.

And here’s what was actually on that menu: venison, wild duck, wild geese, eels, clams, squash, corn bread, berries, nuts, and the “Indian pudding” that the English called furmenty. That meal was one of the last untroubled moments the whites and natives ever spent together.

Within 50 years, most of the Woodland peoples had been killed or claimed by European diseases or–if lucky–had disappeared into the woods. Today there are still 500 Wampanoags living in New England.

They do not celebrate Thanksgiving.

WHILE CRANBERRIES, squash, pumpkins, corn, turkeys, chocolate, tomatoes, potatoes, and chilies are commonly eaten the world over today, two thirds of all the foodstuffs once available originated in the Americas. No wonder the Pilgrims–subsisting on beer, cheese, and porridge–felt thankful. The recipes offered below were created using native American ingredients, and are offered courtesy of Loretta Barrett Oden, chef and owner of the Corn Dance Cafe in Santa Fe, N. M.

Place squash meat into a heavy saucepan and cover with water. Cook until fork-tender, drain, and reserve liquid. Place some of the squash in a food processor. Be careful–the squash is hot! Process until smooth, adding some of the reserved liquid if too thick. Season with salt and sweeten with honey to taste.

Place pumpkin seeds on a baking sheet in a 350-degree oven and roast until fragrant. Ladle soup into warm soup bowls and garnish with pumpkin seeds and chives. Serves 4-6.

In a large sauté pan, heat just a bit of oil to keep from sticking or use a non-stick pan. Add squash, corn, tomatoes, mixed beans, and 1 heaping tablespoon sage pesto. Toss quickly. Do not overcook. Place in large bowl, garnish with sage leaves, and serve immediately. Serves 4-6.

Mix all together in blender.