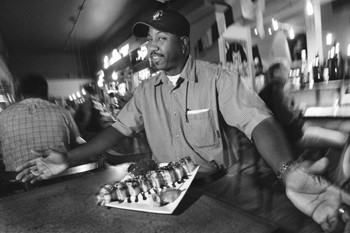 East Meets West: Tex Wasabi’s manager Tony Mason lords over what may be the most unlikely juxtaposition in the history of culinary miscegenation.

Tex Wasabi’s may be the strangest restaurant in the universe

There are some things that just don’t go together. Oil and water. Kids and matches. Compassion and conservatives. You get the drift. But there’s at least one North Bay restaurant that doesn’t get it. Tex Wasabi’s Rock-n-Roll Sushi-BBQ, which melds Texas-style barbecue with Japanese cuisine, may be the most unlikely juxtaposition in the history of culinary miscegenation. Imagine today’s quintessential Texan, President George W. Bush, wearing fundoshi, the traditional Japanese up-the-butt loincloth favored by sumo wrestlers.

But in some strange, unknowable fashion, Tex Wasabi’s does work. At the moment, it may be the hottest nightspot in Santa Rosa’s downtown hub, with up to a 45-minute wait for a table on Friday and Saturday nights. What in blazes is going on here?

Nestled in the bottom floor of a brick building on Fourth Street, Tex Wasabi’s outward appearance evokes the same sort of feelings one encounters entering concept restaurants such as Planet Hollywood or the Hard Rock Cafe. It has all the makings of a franchise ready for export. A lot of work went into the logo, which features a broncobuster digging his spurs into the sides of a koi carp. Unless I miss my guess, it’s patterned after Kiss’ Rock and Roll Over album cover.

The already narrow space has been partitioned with a bar on one side, the dining room on the other, and a copper sushi bar in the back. Festive neon signs above the bar promote various libations, including fishbowl-sized hard-alcohol concoctions with names like Shark Attack; drinking is a big part of the scene here. A big-screen TV plays Westerns and Japanese Godzilla movies with the sound muted. The Good, the Bad, and the Ugly is in high rotation, which is cool, because I know all the words already.

Despite the fact that I abhor concept restaurants, I found many of the aforementioned cultural references endearing. Kiss and Clint Eastwood create an odd but not altogether disagreeable synergy. But what about the barbecue and sushi?

Essentially, the restaurant’s namesakes are offered in one of three ways on the menu. You can order straight barbecue, straight sushi, or a combination of the two called “gringo sushi.”

If there’s one thing that can explain Tex Wasabi’s popularity, it’s the sushi. My first sampling was the Rainbow Roll ($12). It was literally a work of art, a so-called inside-out sushi maki roll, with the rice on the outside and the nori (Japanese seaweed paper) on the inside, holding together prawn, avocado, salmon, tuna, seared albacore, wasabi, and sesame seeds. Though it may seem a bit pricey, it’s easily big enough to serve as a lunch or dinner entrée, all wrapped up in a bundle as thick as a man’s wrist.

They say everything comes big in Texas, and that saw has been applied to the sushi menu here. So, while $4.50 for maguro nigiri (raw tuna served atop twin clumps of rice wrapped with nori) may seem expensive when compared to other North Bay sushi restaurants, the portions of fresh, succulent ruby-red fish meat are generous and well worth the price. The same can be said for sake nigiri (salmon, $4) and unagi nigiri (grilled freshwater eel, $5).

For my money, the reverse seems to apply to the Texas-style offerings on the menu. The chicken, baby back ribs, brisket, and pork are house-smoked and served with any two of the following traditional barbecue side dishes: steamed rice, shoestring French fries, cole slaw, potato salad, macaroni salad, barbecue baked beans, or seasonal vegetables. The portions are average-sized and the prices steep, perhaps explaining why sushi far and away seems to be favored by Tex Wasabi’s customers.

Which is not to say the barbecue isn’t good–it is. The house barbecue sauce, seasoned with just the right amount of cayenne, is lip-smacking delicious. But I’d hesitate to call anything else here outstanding. Baby back ribs (half order, $14; full order, $19) pulled off the bone easily but were a bit gristly and lacked any discernible smoky flavor. The barbecued half chicken ($12) seemed to hold the smoke best. The baked beans ($1.50 as a side order) were incinerated beyond recognition; and “cowboy” slaw ($1.50) was laden with too much mayonnaise.

If the sushi is great and the barbecue OK, the gringo sushi is disastrous. My first sample was called Big Bird on Fire ($5), blackened chicken and (believe it or not) shoestring French fries rolled up in rice maki-style, wrapped with bland, white tapioca rice paper instead of nori and topped with a Thai-style sweet chili sauce. The dry, white chunks of tasteless breast meat did not appear to be blackened, and the French fries set a new low in the realm of cheap fillers. Worst of all, no one seems to have researched the effects of combining sweet chili sauce with wasabi (green Japanese horseradish paste traditionally served with sushi), an amalgamation of sour, pungent tastes that made me wince.

“How’s the Big Bird?” the waitress asked, and then, when I didn’t answer immediately, she added, “It’s different.”

Kemosabe roll ($5) fared slightly better, perhaps because this similar maki-style roll with barbecued beef brisket, French fries, and onions comes with a garlic aioli in place of the chili sauce. But even though it was possible to dip each slice into the wasabi and soy sauce mixture without cringing, never once was I fooled into thinking I was eating anything remotely Japanese.

The safe bet seems to be to follow the seeming lead of other Tex Wasabi’s patrons and stick to the sushi. However, there are some other items on the menu worth mentioning. Pulled barbecue pork sandwich ($6) featured mounds of shredded pork and cowboy slaw served on three miniature potato rolls. It was sloppy as a Texas flood, and the slaw still has too much mayo, but shredded pork fanatics (of which I am one) will approve.

Other items available include a host of dinner entrées such as New York steak with wasabi butter ($17), Cajun catfish ($13), and seared ahi tuna ($16). Salads include Hidden Chicken, Crouching Salad ($10), the Tex Wasabi’s version of the classic faux-Asian dish, and the Tokyo Cobb salad, which attempts to turn Japanese via the addition of tempura shrimp and a wasabi bleu cheese dressing. Desserts include Texas mud pie ($6), green tea cheesecake ($6), and the Favorite Fortune ($5), vanilla ice cream rolled in crushed fortune-cookie crumbs and drizzled with chocolate, caramel, and raspberry sauce.

Brought to us by the same people who conceived Johnny Garlic’s, Tex Wasabi’s has generated the type of buzz most restaurateurs would envy. At the same time, there’s a definite love/hate relationship with the place. When I mentioned I was reviewing it to several of my foodie friends, they rolled their eyes at me. When I told them I thought the place was worth a visit, they got angry. And even patrons openly complain about the service, which tends to be exceedingly slow.

Nevertheless, Tex Wasabi’s is worth a visit, if only for the sushi and the bizarre ambiance. In the dining room, there are insets high up on the wall in which various pieces of Texan and Japanese memorabilia have been placed: saddles, samurai armor, Winchester rifles, a shamisen or Japanese lute. The only thing missing is a wax statue of George W. Bush wearing fundoshi.

Who knows? It just might work. Stranger things have happened at Tex Wasabi’s.