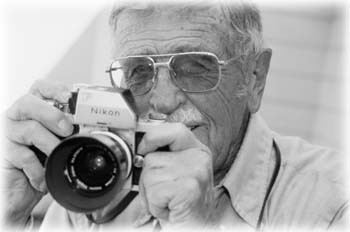 Shutter to Think: Photojournalist Ted Castle captured the panoply of human experience in his photos.

THE ONLY PHOTOGRAPH on the walls of Ted Castle’s Santa Rosa living room is a colorfully pretty shot of a golf course. Of course, this isn’t remarkable by itself–particularly in a room otherwise crowded with African masks and sculpture, oil paintings signed by friends, and one unmistakably perfect piece by the late assemblage artist Raymond Barnhart.

But the photo, hung high and not visible from the couch for a lampshade, seems inexplicably lonely because Castle is, after all, a highly acclaimed professional photographer. A former Time-Life and freelance photographer mentored by the great photographic artist Edward Steichen, Castle has literally traveled the world with his lens, documenting postwar Europe in 1952, shooting the faces of Africans for Pepsi-Cola in 1956, following the antics of the crew members and actors on the movie sets of Oklahoma and Man on a Tightrope, spending 10 days with grimy Ohio coal miners above and below ground, and capturing the visage of First Lady Eleanor Roosevelt in an unaware moment.

In a profession that demands that he put his subjects so at ease that they remain unconcerned while he attempts to capture their souls in silver gelatin, Castle’s simple charm once led then-neophyte actress Julie Andrews to allow the man and his camera to follow her and a friend off the street and into a pet store. There, the young Broadway star purchased a puppy and returned to her New York apartment’s couch–with Castle, whom she had never before met, in tow–where her beautiful face is seen in profile as she lies down, wrinkling in a decidedly inelegant smile, gently wrestling the dog.

Though he’s now in his mid-70s, it’s still easy to see why a gamine starlet would willingly assent to let that strange fellow follow her home. Castle’s is an easy manner, and when he looks at one, there is an odd feeling of being seen.

A small slice of Castle’s work is featured in the Foyer Gallery of the California Museum of Art. Titled “Nomadic Eye” and running through April 27, this slight outcropping of photos shows Castle’s uncanny ability to snap at just the right moment.

Getting Castle to snap in person is easy. Just ask him about his status as an artist.

“What are you talking about, ‘fine art photography?'” he snorts. “It’s the recording of people and their bodies and their hearts and their souls. What do you call fine art in photography? Ansel Adams? That’s just like going out and seeing a person over there–and bingo. That’s just what Ansel did. He used to drive around in his car, with all of his equipment in the back of the car, jump out, and set up his tripod.”

OK. So one backs away from accusing Castle–with the creamy quality of his greys, the unconcerned and meditative air of his subjects, his eye for placement and on-the-spot cropping–of being an artist. Rather, he’s a photojournalist, with a mandate to record humanity.

Trained as an engineer, Castle fought in World War II and returned home to his desk job. One day he looked up from his drafting table and realized that he couldn’t see a single face. Everyone had their back to him. As evinced by the hundreds of human eyes one sees on looking through Castle’s work, backs are unacceptable. “I thought, ‘What the heck am I doing here?'” Castle remembers. “So I walked up to the boss, and I quit.”

Castle studied photography for two years at Santa Barbara’s Brooks Institute and then packed up three portfolios of work, pocketed a thousand dollars, and hitchhiked to New York to make his fortune. Upon arriving, he went to the Museum of Modern Art, determined to have an interview with the museum’s director of photography, Edward Steichen.

“I showed him my stuff,” Castle chuckles, “and he said, ‘Well, I think you ought to go back to engineering.’

“I walked out of there and said to myself, ‘I’m not ever going to give up until I get some of my pictures into the Museum of Modern Art. That was in the end of 1948,” Castle says with satisfaction. “In 1951, he took one.” And in 1955, Steichen included two of Castle’s shots in his famous traveling exhibit, “The Family of Man,” which later became a popular coffee-table book.

“I don’t plan it,” Castle says of his work. “Before I went off to Europe, I went to thank [Steichen] and he said, ‘Now don’t forget, you get close in on your subject and don’t do any cropping when you get back to develop them.’

Castle gradually stopped traversing the world as a photojournalist. He gained a reputation for his ad photos and ran a lucrative business documenting for attorneys the travails of daily life for accident victims. These days he takes photographs for pleasure, is maniacal about golf, and refrains from doing any portraiture. Reaching out has become too difficult; remaining a humanist has not.

He is particularly proud of his inclusion in the “Family of Man” exhibit. “That book shows what we all have,” Castle says earnestly. “We all have hope, we all have desire, we all have agony, we all have despair. When I went to Africa in 1956, I brought the book with me to remind myself to get close.

“That to me is what human beings should be, and what we all should be doing, rather than going out and shooting everybody. I don’t care whether you’re green, black, blue, or white–when you get scratched, you bleed red.”