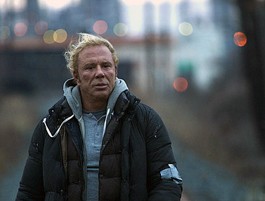 A few decades ago, “turkey” was a bird of good omen to thespians. The slang meant “a holiday entertainment of guaranteed success” despite what the actor might personally think of its dry or greasy qualities when privately drinking and muttering to himself. Is it too late to retrieve the original meaning of “turkey”? Perhaps not, when we survey the holiday schedule, with rich, overstuffed, butter-dripping fare in all directions.

Take ‘Australia’ (Nov. 26) for instance. Director Baz Luhrmann has recreated not only the sweep of Gone with the Wind but the nigh insane prevarication that surrounded that epic’s making. Just as GWTW oversaw the coupling of the all-business North (Mr. Butler) with the all-romance South (Miz Scarlett), Luhrmann mates an Oz mustang, played by Hugh “Wolverine” Jackman, with a titled English filly (Nicole Kidman) to foal a mighty island nation.

Considering that the Aussie director’s previous work (Moulin Rouge) was as gaudy as a forest of Christmas trees, it might be overshadowed at the box office by a sleeper hit, and ‘Marley and Me’ (Dec. 25) could be it. The adaptation of John Grogan’s sweet-sour memoir stars Owen Wilson as a Miami journalist who adopts a troubled bowser. Actress Jennifer Aniston, a chronic overreacher, is completely in her comfort zone as Wilson’s Blondie, facilitating her husband’s progress from happy young guy to Dagwood Bumstead. This movie has good snark in addition to a wonderful dog who will make you cry and cry until your eyes come out on stalks like you’re a Dungeness crab. The other big dog story this fall is ‘Bolt’ a 3-D Disney/Pixar cartoon about a would-be super canine who never realized he was mortal. Travolta and Miley Cyrus are in the vocal cast.

I’ve grown old listening to announcements that someone was going to make a film of ‘The Curious Case of Benjamin Button’ (Dec. 25), F. Scott Fitzgerald’s 1922 short story concerning a life lived in reverse. Now it is done, with the Fitzgerald-handsome Brad Pitt starring and director David Fincher bringing out the macabre accents of the tale. Nothing else this season looks quite as distinguished or as moving.

One vaunted film, Sam Mendes’ DiCaprio/ Winslet vehicle ‘Revolutionary Road’ (Dec. 26), taken from Richard Yates’ sizzling 1961 novel, channels a Mad Men vibe without the pungency. Certainly Ron Howard’s small-camera ‘Frost/Nixon’ (Dec. 5) isn’t devastating; Frank Langella is too beautiful to play our most warped president as grilled by our most obsequious chat-show host. (As long as they don’t make a movie called Leno/McCain, I’m good.) ‘Doubt’ (Dec. 12) looks very savory, with Philip Seymour Hoffman as a priest who may be fondling his altar boys. Meryl Streep co-stars as a nun on the warpath.

There’s something about the season of giving that brings out the Nazis. I, too, choked when I saw Tom Cruise in an eye-patch and a Wehrmacht uniform. But the previews for ‘Valkyrie’ (Dec. 26), about the plot to kill der Führer, has a smart, reliable director in Bryan Singer (Apt Pupil) and tantalizing previews. Kate Winslet in ‘The Reader’ (Dec. 10) maintains that SS guards need love, too. ‘Defiance’ (Jan. 16) has Daniel Craig as a Jewish guerrilla fighting the Germans in the Polish forests. And the currently running do-gooder ‘The Boy in the Striped Pajamas’ is a weepy lesson for the kids that once upon a time there was a Holocaust.

Seeking more contemporary explosions, the demolitions fancier is directed to the remake of ‘The Day the Earth Stood Still’ (Dec. 12) with Keanu Reeves as the alienated visitor. For abject dumb there is nothing so dumb this season as ‘The Spirit’ (Dec. 25), with Frank Miller digitally leaching all the suave playfulness out of Will Eisner. Set in San Francisco, the comedy ‘Four Christmases’ (Nov. 26) has a terrific premise: a couple get stuck Christmasing at their divorced parents’ four residences. Vince Vaughn and Reese Witherspoon co-star, suffering through this insufferable time of year.

‘Milk’ (Nov. 26) is Gus Van Sant’s biopic of the pioneering gay politician Harvey Milk (Sean Penn); Josh Brolin courts best-supporting Oscardom as the Twinkie-troubled copper Dan White. ‘The Wrestler’ (Dec. 17) is a much-trumpeted comeback for Mickey Rourke. We’ll see, because director Darren Aronofsky’s taste for vaingloriousness (see Requiem for a Dream) could make audiences stick with the WWF. Finally, ‘Cadillac Records’ (Dec. 5) looks like the season’s only serious musical. It’s the Chess Records story with Beyonce as Etta James and Jeffrey Wright as Muddy Waters, and that last is a name great enough to end any article.