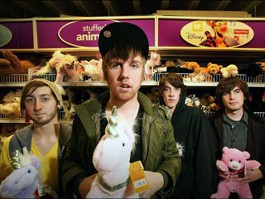 Listening in the Wrong Key

The stripped-down aesthetic of Oh, Apollo!

With the recent silencing of the Church House, a defunct spray-painted punk house in Petaluma’s industrial district, the typographically effusive band Oh, Apollo! move down the street to the Phoenix Theater this weekend. The change may take some readjusting. With two years behind them as a band, Oh, Apollo!—bona fide standbys at the Church House’s living-room shows—favor doing things in rudimentary, down-home ways. All of their releases have been self-produced, and their songs generally contain less than 10 sentences of lyrics.

What is big about Oh, Apollo! is their sound, which should have no problem filling the venerable hall. Gang vocals, rapid rim shots, time changes, spidery guitar tapping, and an ADD-afflicted structure define fiery tracks like “When Did the Future Change from a Promise into a Threat?” In the song, vocal chords are downright shredded, with screamed lines like “I had a hope / But it was lost in the 1920s with my grandfathers money.” If there were ever a short surrealist film about a midnight train hijack involving stealth and betrayal, it could make for an appropriately skirting, grainy soundtrack.

After two EPs and a full-length, Oh, Apollo! show no sign of letting up or wussing out, with one lone 1980s FM-ballad exception: If you walk in to the Phoenix this weekend and hear a delightfully off-key rendering of Whitney Houston’s “I Will Always Love You,” you’ll know you’re in the right place.