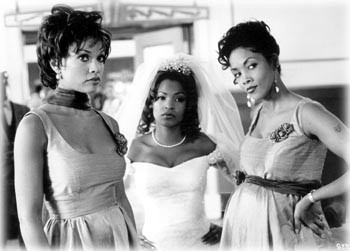 Bestselling author Sheri Reynolds’ takes on the meaning of Big Mamas, pistols in theaters and the surprise hit ‘Soul Food’

Writer David Templeton takes interesting people to interesting movies in his ongoing quest for the ultimate post-film conversation. This time he gets much more than he bargains for when he takes bestselling author Sheri Reynolds (The Rapture of Canaan) to see the remarkable new family drama Soul Food.

THIS IS A SURPRISINGLY clean floor–no trash, filth, gumwrappers, stale pocorn or spilled soda cups. A very good thing, because I know Sheri Reynolds didn’t come all the way from Virginia to muss up her clothes crawling on the floor of some movie theater on San Francisco’s Broadway Street.

Yet, strangely, here we are, down against the cement along with 300 other people, all of us crawling toward the neon-green exit sign, straining to keep our heads out of the way of bullets–just in case the pistol-waving fellow in the front row actually starts shooting.

Weird. Just minutes ago, we were enjoying one of the year’s best films, a little thing called Soul Food. Now the doors have been flung wide open, afternoon light rips through the room, and we are crawling out on our hands and knees, all because a woman with a crying baby refused to leave, sparking an angry volley of curses from the guy behind her, who then stormed from the theater, returning later … with a gun.

“I can’t believe this,” Reynolds mutters, her unmistakably Southern accent lending a folksy punch to her words. “I was really likin’ the movie, too.”

Ten minutes later, still visibly shaken by the ordeal, she asks, “I’ve never been on the floor of a movie theater before. How about you?” We’ve found sanctuary in a brightly lit espresso joint just across from the theater, which several police cars have now surrounded. The guy with the gun, having made his point, has apparently disappeared. No shots were fired. No one was hurt.

In a way, this is just one more thing in a year full of surprises for Reynolds, beginning last May when her lyrical novel The Rapture of Canaan was chosen as the monthly suggestion in Oprah Winfrey’s sensational Book Club. That announcement propelled Reynolds and Rapture–which, previous to Oprah, had made so small a splash that its publisher dropped the author from its stable of writers–onto the bestseller lists.

Reynolds’ next book, the slender but equally lovely A Gracious Plenty (Harmony, 1997)–about an isolated woman who becomes an unlikely advocate for the wonderfully raucous ghosts who inhabit the graveyard she tends–happily sparked a lucrative bidding war among the world’s top book houses.

All of which brought her to me, whereupon I put her in a theater with a lunatic. “I’m just disappointed we didn’t get to see the end of it,” she sighs, wrenching the cap from a bottle of apple juice. “It was just so pleasant to me.”

The film–a surprise hit–is about three sisters (Vanessa Williams, Viveca L. Fox, Nia Long) in a loving, extended middle-class family warmly ruled by Big Mama (Irma P. Hall). A genius at inspiring the best in her family, she insists that all her loved ones turn up for Sunday dinner. When she falls into a coma, the sisters’ tensions begin to mount, and the Sunday dinner tradition, along with the family’s unity, is threatened.

“You can’t protect people from badness,” Reynolds says, recalling the way Big Mama’s 12-year-old grandson attempts to carry on for her by maneuvering to bring the family together again. “This family was very loving, yet it was full of problems. I could understand why, by not having Big Mama at the center, it would allow these people to have just enough shakiness inside to make those small choices that turn big.”

Reynolds has just tapped into one of the underlying themes of the film. The way that little things become big things: A husband’s innocent offer to help a troubled female relative is the first step toward a potential affair, a wife’s behind-the-back attempts to deal her husband into a job ends in his going to jail.

Across the restaurant, someone cranks up the espresso machine. Reynolds, hearing the sharp, loud wail of the steamer, almost jumps out of her seat. “Wow!” she laughs, covering her heart with both hands. “I thought it was squalling tires out in the street or something. I was all ready to be shot at. I’ve sure got a good case of nerves goin’ on now!”

With a deep breath, she manages to regain her composure. “Actually, my own grandma’s a lot like Big Mama,” she says. “My grandma runs everything, and I love her so much. She’s one of my favorite people in the world. She gets us to do what she wants us to do, though more by manipulating us than by being this powerhouse of wisdom. She nags. She tries to clear our heads.

“Grandmas are important people,” Reynolds adds, noting that the character of Nana in The Rapture of Canaan is based on her grandmother, to whom the book is also dedicated.

“What this movie’s doing,” she continues, “is showing that–hey!–this is family. Family is important. Stuff happens, and you just have to negotiate between good times and bad times. And that you have to make your own strength sometimes ’cause the Big Mama ain’t always gonna be there.”

Reynolds finishes the last swig of apple juice. “I want to be like Big Mama someday,” she exclaims, “to be enough out of my own way as to let the wisdom come right to the top, like a fountain.”

Reynolds pauses, glancing out the window, looking for the next surprise. “I’ve always wanted to be a fountain of wisdom,” she laughs. “Haven’t you?”