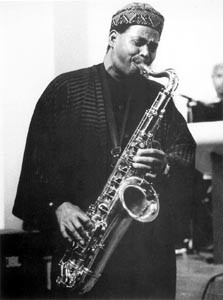 Odean Pope strives for the sacred

Odean Pope spends his time in the relentless pursuit of truth as codified in the fiery scales of a searing free-jazz sax solo. Indeed, 10 minutes into a phone interview with this obscure Philadelphia-based tenor sax player, it becomes clear that this is a man who is not a mere musician in the traditional sense of the word, but a spiritual seeker thirsting for sacred knowledge inside a swirl of polytonality. “To me, music is a universal thing,” says Pope.

This is a notion that permeates Pope’s conversation and one that has been a guiding light throughout his long, fruitful career as a performer, recording artist, and educator.

How deep is that vision? At age eight, as a member of a Baptist church in the unusually named town of Ninety Six, N.C., Pope would sit in the straight-backed, wooden pews, listening to the gospel choir and pondering what it would sound like to play that same sacred music on nine saxophones.

He got his chance. As the leader of the avant-garde Saxophone Choir, Pope has recorded several adventurous (and hard-to-find) albums, establishing himself as a cult figure. Meanwhile, he’s performed for 25 years as a sideman with legendary jazz drummer Max Roach and jammed with many of the giants of jazz, including John Coltrane and Dizzy Gillespie.

He returns to Sonoma State University Oct. 18 for a student workshop and public concert at the Evert B. Person Theater.

“It’s important to channel information down to the young people in order to keep this music alive,” says Pope, 59, who teaches everyone from poor Philly kids to privileged suburban students. “My philosophy is that even if you successfully pass that information down to one out of 10 students then that one will pass it down to others,” he adds. “You’ve got to keep that fire burning.”

For Pope, that fire has burned hotly since his youth. “When I first came to Philadelphia I was 10 years old,” he says. “There was a place called the Earl Theater, and they used to have Lionel Hampton, Count Basie, Illinois Jacquet, and Buddy Rich’s big bands–a whole lotta big bands used to come through town. I was exposed to a lot of different kinds of music.”

At 18, he joined the pit band at the rival Uptown Theater, playing behind such R&B and soul heavyweights as Stevie Wonder and Aretha Franklin. “About 10 days out of each month, they’d feature a touring stage show–Smokey Robinson, the Supremes,” recalls Pope, who already had sat in with jazz greats Chet Baker and Elvin Jones. “I learned a lot from that.”

It was during one of his frequent visits to a local nightclub that an underage Pope met Roach. “I wasn’t old enough to go inside the clubs, but I used to stand right near the door and listen to all the music.” During the breaks, the musicians would come outside to catch a breath of fresh air.

One of them later arranged for Pope to sit with Roach. “Max kicked ‘Cherokee’ so fast that it was one of the most intense learning experiences I ever had,” Pope says of the drummer’s mastery of legendary saxman Charlie Parker’s complicated jazz piece. “It made me go back to the woodshed to get more and more involved with the music.”

Among his closest contacts in those early years were such jazz notables as Coltrane, Rahsaan Roland Kirk, Pharaoh Sanders, Benny Golson, and Jimmy Heath–all part of the bustling Philly music scene. He remembers Coltrane as a humble man who would sit in his living room with his tenor sax perched on his lap, surrounded by a half-dozen books on African and American literature and the arts, alternately reading and playing his horn.

“‘Trane gave me my first major job with [jazz organist] Jimmy Smith,” Pope says. “When [Coltrane] went to work with Miles Davis [in 1958], he had two weeks left on a job at a club here in Philly. He’d been listening to me at some of the local jazz workshops and for whatever reason he called and asked me take over that spot for him. Of course, I was scared to death, but he convinced me that I could do it.”

At 21, Pope landed a spot in Roach’s landmark band. It was a heady experience for the novice jazz player who stayed on board for a year before returning to Philly. “It really showed me the kinds of things I needed to do and convinced me that music was going to be my livelihood,” he says. “I came back and enrolled in school and got deeply involved with it.”

He returned with a vengeance, performing with pianist Ray Bryant and Art Blakey and the Jazz Messengers before resuming his long, continuous association with Roach. In the ’70s, he led an experimental jazz-funk fusion band called Catalyst, a contemporary of Miles Davis’ early electric bands. “It was a period of adjustment during which all musicians were standing back and taking a very good look at themselves and saying, ‘Let’s dabble in this and see if there’s anything there.'”

He formed his own trio, a format that gave him the freedom to explore a more adventurous free-jazz sound, and joined the ranks of jazz players reaching out into unexplored musical terrain.

Over the years, he has embraced the spirit of musical discovery. “Right now, I’m working on the whole spectrum of how you can expand, like cross rhythms. It gives me a chance to extend from where some of these jazz giants left off,” he explains. “I’m taking it to another level. The way I look at it is, music is evolution. Every time I pick that horn up there’s always something that I discover I can do differently if I really seek. If you were on planet Earth for, like, two billion years, I feel as though there’s always something new that you can find to do. There’s no end.

“When you feel satisfied with what you’re doing and feel as though you’ve got everything, then you’re dead.”