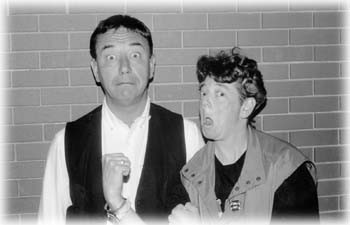 Two of a Kind: Political satirists Will and Debi Durst ham it up after viewing the sick-flick fest that is ‘Con Air.’

Will and Debi Durst shout out about nothing (and ‘Con Air’)

IT IS! IT IS! It’s a sick fucking movie!” laughs political comic Will Durst, hollering to be heard above the bar’s deafening high-decibel music. Durst is reiterating the succinct observation he made just a few moments ago–from the balcony of a packed San Francisco theater–as the gleefully tasteless new film, Con Air, murdered its last bad guy and came screeching to a grand and noisy close.

“Oh, it was not sick!” Debi Durst disagrees, in a loud but amiable shout. “It’s a movie about convicts, for goodness sake! They were bad, right? And you knew it was going to turn bad, and they were all going to die bad.”

Will opens his mouth to reply, taking a deep breath in order to achieve the appropriate volume, and is suddenly interrupted by our waitress, presenting a round of beers sent over by a smiling, waving patron across the room. As Will ambles over to thank his fan, Debi leans over and whoops, “See? It kinda pays to pal around with somebody famous!”

This night out together is a somewhat rare occasion for the Dursts, who are so increasingly in demand that with their active schedules and constant touring–individually and as a team (Debi is a comedian in her own right)–they’re seldom both home at the same time. Will, perhaps best known for his sharp, satirical programs on PBS–The Durst Amendment and the series Livelyhood–also writes a syndicated political humor column and performs his insightfully grumpy stand-up act around the world.

Con Air stars Nicholas Cage as a nice parolee on a very lousy day, when his prison transport plane is taken over by the world’s worst convicts (John Malkovich, Ving Rhames, and Steve Buscemi). It’s a thoroughly modern action film, the kind in which audiences are encouraged to laugh every time someone is killed or horribly mutilated.

“I still think it was kinda sick,” Will announces upon his return. “Americans sure love to see shit blowed up good, don’t they? Did anyone count how many people died in this thing? Movies are only gonna get worse, though. I read some interview with Jan De Bont [the director of Twister and Speed]. He said, and I quote, ‘Movies are going to get a lot bigger, and a lot louder.'”

“Hey, go ahead and make ’em bigger and louder!” his counterpart counters. “It’s only a movie, right? It’s not supposed to be Shakespeare!”

“It’s only a movie!” Will nods, pounding on the table. “I always forget that!”

In quick succession, the Dursts list dozens of memorably violent movies; point out that Dana Carvey’s wife looks exactly like Dana Carvey; and confess to a penchant for sneaking from one movie to another in multiplex theaters.

“Remember Reno?” Debi smiles, as Will rolls his eyes in remembrance. “We’d seen some action thing,” she explains, “and we’d ducked into Home for the Holidays. There were maybe five people in there, and the manager kept coming in and kind of looking at us.”

“But then the movie started, and there was no picture!” Will laughs. “We sat through three previews and the first few minutes of the movie–with only the sound on.”

“We were afraid to do anything about it,” says Debi.

Suddenly, Will reaches over and snatches the tape recorder.”Hey!” he yells. “There’s no tape in here! Oh my God!”

“No tape,” Debi moans. “We’ll have to repeat everything. What have we been talking about, anyway?

“Uh,” Will grabs his head as though thinking. “I know! The future of movies is ‘Blow shit up even bigger!'”

“There was something else,” he insists.

“Only a movie?” Debi prompts.

“That’s right!” he crows. “It’s only a movie. And a sick fucking movie at that!”