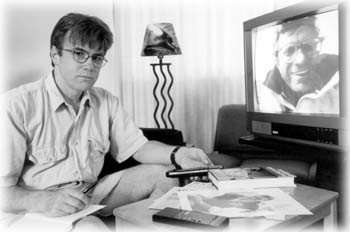 PETER BIRD DIED ALONE. He was probably knocked unconscious when a wave bearing a log fatally thwacked his one-man rowboat and swept him into the cold arms of the sea. Let’s hope he was out, unable to feel the deadly chill of the waters off the Japanese coast soaking his windbreaker and shorts on June 2, 1996.

Bird, 49, had been at sea for a month, confined to the 35 short feet of his specially equipped rowboat. Single-minded and some say obsessed, Bird was attempting to make a solo row from Vladivostok to San Francisco. And he was trying it for the fifth time.

“Most of us don’t actually get quite that opportunity to do exactly what we want to do,” says Santa Rosa resident Andrew Golland, a close friend of Bird’s and a filmmaker who is preparing to shoot the story of Bird’s life.

“Peter had that opportunity, and he chose to take it, despite perhaps that fact that he was an extremely gregarious person, one who had a lot of close friends and relatives–and a family.”

A London-based photographer whose rocky career included stints providing transport for film and fashion shoots, Bird had gained fame when he and a friend rowed together from Britain to the West Indies in 1980. Youthful and handsome, Bird made great copy for the newspapers and an even better image for the TV. And he had found something real to do.

“Everyone in life must have something to aim for,” he said simply in a television interview. Once bitten, Bird began planning the next adventure. In 1983, he set out to row solo from San Francisco to Australia–anywhere in Australia–his only real obstacles being his own psyche, the sea herself, and the Great Barrier Reef. Bird handily overcame the first two.

At sea for 10 months, Bird endured the extraordinary loneliness of such self-imposed solitary confinement, videotaping himself for company, weathering six cyclones, and traveling some 9,000 miles on the strength of his own two arms. With 33 miles left to go before he touched land on the Australian coast, he swamped on the reef.

“His take on it was that it was a failure, getting pulled out [of the water],” says Golland. Pointing to a TV image of photos taken at Bird’s rescue by an Australian coast guard cutter, Golland says, “You’re not really sure whether he was waving for them to go away or for them to come. They said, ‘If we don’t pick you up now, we might never pick you up.’ That was the starting point.”

The starting point, as Golland sees it, for Bird’s search to surmount the sea.

This is also the starting point for the film Golland is making about his friend, producing it with his own Clear Sky film company. This British native has written a script and plans to direct Last Row, a fictionalized account of Bird’s life and passion. Taking Bird’s stranding at the reef as a central metaphor for the determination he showed for the rest of his life, Golland begins filming at Tomales Bay this fall, with a general casting call going out in August. British actor and James Bond portrayer Pierce Brosnan has tentatively expressed interest in playing Bird.

When the two met through mutual friends in London in 1987, Golland didn’t know that his new acquaintance was Peter Bird the adventurer, and Bird didn’t play it up. It was months before the truth came out. By then, Bird had a new plan: rowing alone from Russia to California. Between 1992 and 1996, he made five attempts, building at least one of the boats in Sonoma. The second attempt, in 1993, found him at sea again for 10 months, traveling a torturous two miles a day against unfavorable winds, unknowingly rowing for weeks in circles, out of food, and exhausted.

Even had he been endowed with superhuman strength, at that rate, the 6,000-mile trip would have taken him five years. He was picked up at sea.

But it was the last trip in 1996, a lone launch far different from the fanfare of the others, that killed him. He left behind his companion, Polly Wickham, and their 5-year-old son Louis , a child who had grown mostly while his father was away. Although Wickham maintained a stalwart acceptance of her lover’s conquests, she is reported to have turned to his brother upon hearing the news of Bird’s death and to calmly say, “I could kill him for what he’s done to us.”

But Golland defends his friend. “Our story is that there was a lot of conflict,” he says, sitting amongst the moving boxes of his recently acquired home. “There was a lot of fun behind the scenes, of course, and a lot of excitement, but principally it tells of his single-mindedness. He was going to do it, and a lot of people at the end probably didn’t agree with that.

“There was something that set him apart, a depth that none of us could quite latch on to,” says Golland. “There are things that we’re able to do with a [film] that color certain features. Obviously, we have a story that’s reflective of what happened. I have a belief that there are reasons why he did certain things.

“I think some of the reasons are those things about men,” he continues. “Do we ever grow up? The big thing about settling down is that there are commitments to be made, and perhaps sometimes that was the big difficulty [for Bird]. The real big difficulty was not going out there again. There was a lot of razzmatazz associated with all of this. There were always people interested, and women interested; he had this very warm and magnetic personality.”

Bird floundered in the business world; rowed with a friend to the West Indies, landing there not as a prearranged destination but as the result of conflict that arose between the two men; and spent the rest of his life trying to achieve a possibly impossible goal while absenting himself from his child during the boy’s most formative years. Why does Golland consider him a hero? Why, in fact, was he not a failure?

“Because he tried something as often as is humanly possible,” Golland replies firmly. “There’s a grit factor involved. His story is truly a no-limits story, and he actually did pursue it to the end.

“He drove himself on to continue this, and I think that it’s that conflict between what you’d like to do and what you actually end up with or are saddled with in life. A lot of people say, ‘If I don’t go out now and climb that mountain, I’ll never do it.’ Well, with Peter, it just all went on a lot longer.

“I always sort of thought that it was like banging your head against a brick wall,” Golland laughs. “It’s wonderful when you stop.”