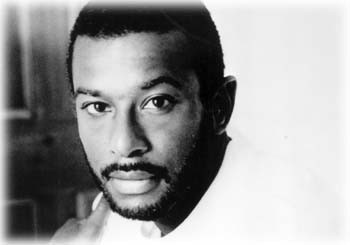 Brain Storm: Author Caryl Phillips sees no death in the life of the mind.

The rumored demise of thought

AN ESPRESSO, please, as large as you’ve got.” The waiter speeds away, clearly understanding the necessity of the situation. He returns quickly with the coffee, setting it before Caryl Phillips with the no-nonsense efficiency of a doctor administering an emergency shot of adrenaline.

“Well, that was an exercise in concentration, wasn’t it?” Phillips says wearily, sipping intensely at his drink. He is referring to The Designated Mourner, a new film by playwrights David Hare and Wallace Shawn in which three people sit at a table and mumble at the camera. Had he not been running on so little sleep (he is in the middle of a multicity book-signing tour, rising at 5 each morning in order to write), my guest might have struggled less with a film in which, arguably, nothing at all happens.

As it was, there was far more drama in the seat beside me–where Phillips fought valiantly to stay awake–than there was onscreen as director Mike Nichols and actors Miranda Richardson and David de Keyser orated cleverly about the death of intellectualism and the extinction of people who read John Donne.

Phillips–who divides his time between homes in London, the West Indies, and Massachusetts, where he is professor of English and writer-in-residence at Amherst College–is the author of numerous books, including the Booker Prize­nominated Crossing the River. His remarkable new novel, The Nature of Blood (Knopf; $23), is an interlocking series of first-person narratives, with voices from across the globe and throughout time (a young Holocaust survivor, an Ethiopian woman settling in Palestine, a 16th-century Jew imprisoned in a Venetian ghetto after the murder of a girl, and Othello, tentatively exploring his new home of Venice) that are masterfully spun into ever-tightening patterns to heartbreaking effect.

As the author of complex, poetic, heartily non-mainstream books, Caryl Phillips must surely agree with the film’s premise that intellectualism and literacy are hovering on the verge of extinction.

“No. No. I don’t believe that’s true,” he insists. “Though that is certainly what the film posited. Look at the film version of Romeo and Juliet that just came out–that was incredibly popular. Kenneth Branagh’s Henry V a few years ago was nominated for an Academy Award. Millions of people have seen it. I think we’re in a state of robust health, actually.”

“But given the choice, wouldn’t the vast majority rather see a film about dinosaurs eating people than a film based on Shakespeare?” I ask.

“Well, of course,” Phillips nods. “I don’t see that as a problem. During Shakespeare’s time, there were a lot of people watching the equivalent of dinosaurs eating people; crappy romantic stories of the servant girl getting pregnant by the gentleman master, the equivalent of the Harlequin romance. Charles Dickens was popular, but not to the degree that the serialized novels were, and they weren’t far removed from dinosaurs eating people.

“There has always been a popular culture that has a bigger audience than we’d like,” he continues. “And there will always be other people who want more serious forms, who want to engage with the form of the art, whatever form it happens to be.

As the caffeine begins to have the desired effect, Phillips turns his face to the window, leaning slightly forward into a wide beam of afternoon light as he ponders all of this.

“I can’t help feeling,” he murmurs slyly, “that at the end of the film we’re supposed to feel that we’ve sneaked a glimpse at a world that we’ve got to protect ourselves from, the world of the intellectual abyss, that world where John Donne is hurtled toward Hell and nobody reads him or understands him.

“But I didn’t come out the cinema thinking, ‘Shit! We’re about to become major consumers of the Oprah show, only!’ Or ‘Geraldo is about to become the new David Brinkley!’ I’m rather more optimistic than that.”

“So,” I reply, in my best “summarizing” voice, “you’d say that intellectual thought and the love of poetry is safe for the time being?”

“Oh God, I don’t want to be quoted as tempting fate!” he laughs brightly. Eyes widened, he imagines his remarks in print. “‘Phillips says intellectuals safe for forseeable future!’ That’s rather frightening, isn’t it? But we’re not in danger of the death of the intellectual. That seems to be too apocalyptic a drum to be beating.

“I know that the New York Times bestseller list 20 years ago had people like [novelists Norman Mailer, Saul Bellow, and William Styron] and now it has ‘How to Love Your Puppy’ and ‘How to Die at the Age 120 in Three Easy Steps.’ It’s a less intellectually robust bestseller list. And I’m sure the same is true of the movies. We have–to a certain extent–debased and diluted the intellectual content of our commercially successful material. That’s true. We’ve become a much more commercially oriented and much crasser society. I understand all of that.

“I don’t know,” he smiles, now fully awake, “perhaps I’m a gibbering idiot, but I simply refuse to believe that.”