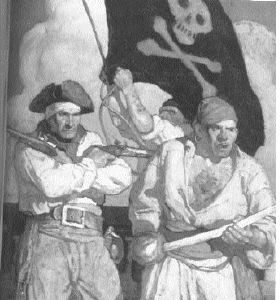 Avast: Why do we love those sea-faring, sword-wielding rascals?

Writer David Templeton takes interesting people to interesting movies in his ongoing quest for the ultimate post-film conversation. This time out, he meets with English pirate expert David Cordingly, not in a theater, but on the deck of a historic sailing ship.

AN OMINOUS EXPANSE of dark gray cloud moves threateningly across the sky as author David Cordingly gracefully climbs up onto the deck of the Balclutha, a 100-year-old, three-masted schooner, docked at the Hyde Street Pier, the dockside “wing” of the National Maritime Museum in San Francisco.

My companion is a former director of England’s National Maritime Museum in Greenwich. He is in the United States to promote the unveiling of his excellent, bubble-bursting Under the Black Flag: The Romance and the Reality of Life Among the Pirates (Random House, 1995), a book that punches holes in all my favorite swashbuckling fantasies. As a starry-eyed fan of pirate films, I prepared to meet Cordingly with the same mixture of emotions one might have before meeting the person who’s conclusively disproven the existence of Santa Claus.

“As someone who shares your love of pirates, I understand the discomfort this brings you,” Cordingly offers consolingly. “But as a historian, I must say that discovering the truth is really quite thrilling.”

Finding a seat beneath the ship’s foremast, Cordingly continues. “I’m fascinated with the contrast between our romantic image of pirates and what they were actually like. Pirates were quite vicious, they were barbarous, not glamorous at all–so where did we get this romantic image? Why do we talk about buried treasure and treasure maps and parrots and walking the plank and all that sort of thing? Those things never happened–or only very rarely.

“One of the interesting things about pirates is that before they were glamorized by Errol Flynn and the swashbuckling movies of the ’40s and ’50s, the pirate was traditionally always the villain in melodramas on the London stage. There was the moment when it was ‘Enter Pirate,’ and everyone hissed and booed, because he was always the villain. And of course he’d be foreign–Indian or a Muslim, but never British. This was so that you could wheel on the British navy at the end and have patriotic songs and drums, and the jolly British Jack Tar would save the day. So for two centuries the pirate was always synonymous with the villain. Then came the movies, with such films as Captain Blood and The Black Swan, and we began to portray him as a heroic, free-spirited, somewhat charming character.”

And why was popular culture suddenly so willing to embrace a new improved image of those seafaring, sword-wielding rascals?

“I suspect it has much to do with the exotic locations that pirates operated in,” he smiles, a breeze rumpling his hair. “As people’s lives became increasingly city-bound and stressful, I think the notion of sailing a ship in the Caribbean, living like a free spirit, swinging through the rigging and all was rather a nice notion to people. And the pirate movies gave us that.” Cordingly, though fond of some of the earlier pirate films, gives mixed reviews to the swords-and-cannons epics of the last decade.

“Cutthroat Island was thoroughly unconvincing,” he says. “They were just going through the motions. Roman Polanski’s Pirates was a dreadful movie, a complete no-go. Strangely, I thought Steven Spielberg’s Hook was terrific. It had a bright-eyed boyish love of the pirate myths all through it.

“I’m still waiting for the really great pirate movie to come along,” he adds. “All they need to do is to read the actual, historical stories more closely. Look at Captain Blackbeard! He’s so astounding you can hardly believe he’s real, until you read the documents of the day and you read what the newspapers were saying about him.

“There’s Henry Morgan, a rags-to-riches tale–this bluff soldier who ends up sacking Panama City. This would have to be an epic. Cast of thousands. He’s sent back to England in disgrace, but ends up in Jamaica with a knighthood and the honorary post of lieutenant governor. He lives happily ever after! I can see a movie about Mary Reade, who actually joined the army disguised as a man and lived as a soldier for a number of years.

“You see, I feel much as you do about pirates,” he concludes gently, standing to face the sky, now clearing across the bay. “I think pirates are a wonderfully romantic image to have in one’s mind. But you can substitute the myth with the authentic, amazing, wonderful truth. In the end, I think the truth would make a far better movie.”

From the November 27-December 4, 1996 issue of the Sonoma Independent