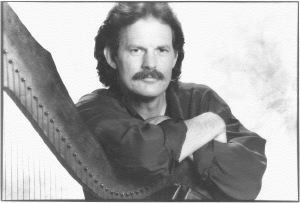 I’D BEEN TO IRELAND twice already,” recalls Patrick Ball, the local musician and storyteller who is widely regarded as the reigning musical master of the 1,000-year-old steel-stringed Celtic harp, an instrument that was banned from Ireland by the British over 200 years ago. “I’d heard the gut-stringed harp, but had never tried to learn the instrument. Then–it was 1980 or so–I went to the Renaissance Pleasure Faire in Novato with the girlfriend of my best friend. She was in real estate and had quite a bit of money,” he continues, warming to the tale.

“So there we were, walking along. All of a sudden I heard this sound. I thought it was the most captivating sound I’d ever heard in my life.”

Following the music, he found a seller of small, wire-stringed lap harps. “I had no money, so I said to my friend, as a joke, ‘Gad! You should buy one of these things for me.’ She said, ‘All right,” and plunked down 500 bucks and bought me my first harp.

“I paid her back eventually, of course, but in a way, I will never be able to repay her.”

Ball had his first lessons from Jay Witcher, the maker of the harp, who showed him how to pick using his fingernails instead of the fingerpads used on softer stringed harps. Within six months, Ball had outgrown the lap harp, and he asked Witcher to make him a full-sized instrument. He uses it to this day.

“I had studied so much Irish folklore and history,” says Ball, whose solo shows invariably feature much Celtic storytelling, “but when you play this ancient instrument it immediately illuminates the whole period. All the information and books are secondhand, but as soon as you hear the music, it’s exactly what you would have heard back in those times. It’s exactly what those individuals we read about were listening to. It bonds us to them.”

He laughs again, adding, “It really is living history.”

THAT the difficult-to-play ancient harp is making something of a comeback among world music enthusiasts is a fact that this Sebastopol resident acknowledges with obvious pleasure. He responds with equal enjoyment to the assertion that his own ethereal recordings on this instrument are the chief reason for its revival, though he adds a dose of heartfelt humility.

“It’s probably safe to say that my work has had a lot to do with it,” he murmurs, adding, “But I was very fortunate. My first album came out in the early ’80s. It was one of the very first recordings of the wire-stringed harp, and it sold a lot of records. So I did get in on the ground floor.” He has since recorded numerous CDs, including the perennial The Christmas Rose (Fortuna) and the score for the popular Rabbit Ears children’s recording of The Ugly Duckling, with narration by Cher.

Ball will take the stage locally, playing master of ceremonies at the Festival of Harps, an annual event held Nov. 30 at the Spreckels Performing Arts Center, with an eclectic mix of harpists on the roster.

In addition to his emcee duties, Ball will be performing excerpts from a full-length theater piece he’s written with Bay Area playwright Peter Grazer. Titled Turlough O’Carolan’s Farewell to Music, the play (which Ball premiered in its entirety during this fall’s Sebastopol Celtic Festival) illuminates the life of Ireland’s most famous harpist. O’Carolan, blind from smallpox at age 18, was a musician and composer who rose above the circumstances of his life in the late 18th century to become a beloved folk figure of his country.

“Turlough! He’s the man,” Ball enthuses. “His stuff is the reason I started playing the harp in the first place. That and the sheer beauty of the sound of the wire-string harp. What intrigued me about O’Carolan was that he wrote these beautiful, sprightly, stately things. I was always fascinated with how this blind guy living under such ghastly oppression could write pieces of music like that.

“Some force of character within him prompted him to write beautiful music,” he marvels. “It makes for quite a good story.”

From the November 27-December 4, 1996 issue of the Sonoma Independent