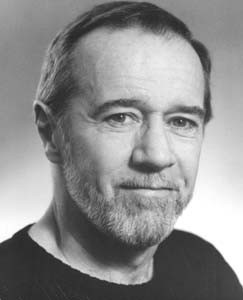 Missed by a Hair

Sounds of silence: No words, dirty or otherwise, were to be had from comedian George Carlin, who turned down Talking Pix’s request for an evening at the movies.

Looking back on a year of post-film discussions, a writer reflects on the ones that got away

Writer David Templeton takes interesting people to interesting movies in his ongoing quest for the ultimate post-film conversation. This is not a review; rather, it’s a freewheeling, tangential discussion of life, alternative ideas, and popular culture.

THWUMP thwump thwump. The tinsel-bedecked chair jerks fluidly upward as my brand-new barber, tapping out a quick rhythm on the foot-pedal (almost in time to the festive, piped-in Christmas music playing in the background), raises me up to within snipping range of her dangerous blades and scissors. Close-cropped and quite muscular, the barber scrutinizes the top of my head. With a final thwump, she glides me to a stop and skillfully goes to work removing portions of my hair.

Regarded as one of the best barbers around–according to the fellows I’ve just recently been waiting with–she’s also rumored to have once cut hair for the U.S. Navy. They say she can do a hundred push-ups with one arm behind her back. “She’s real good,” remarked one young man, quietly filling me in, “as long as you do what she says and don’t make her mad.”

I’ll try to remember that.

“So what do you do?” she barks, scissors a-snipping. “You’re some kind of a movie critic or something, right?” Snip snip. Snip snip.

“Uh, yeah, more or less,” I reply (silently wondering if I shouldn’t be calling her “Sir”). “Basically, I take interesting people to interesting movies in my ongoing quest for the ultimate post-film conversation.”

“Geez, that’s a mouthful,” she whistles. “So, who’ve you taken to the movies this year?”

Obediently, I run down the list, leading with the names I surmise to be the most recognizable: Tommy Smothers, Jane Hirshfield, Dr. Demento, Walter Mosley, Christopher Radko, and Terry Brooks. I also mention a few biggies from years past: Joan Baez, Larry King, Jerry Mathers, Elvira–and spiritual counselor Ram Dass (“I hear he’s recovering pretty well from his stroke,” she says).

When I mention the colorful author Jesse Sheidlower, with whom I discussed the South Park movie, my barber stops cutting.

“The guy who wrote The F Word?” she exclaims. “I love that book! I suggested it for my women’s book group, but none of them would go for it. Too bad. Their loss.”

“It would have incited some interesting discussion,” I agree, as she sets down the scissors and brings out the electric razor. “So far I’ve only mentioned the people who agreed to go the movies with me. With an idea this weird, for every person who says yes, there are at least two or three who say no.”

“Not surprised,” she tosses back, as the razor hums pleasantly in my ear. “Who turned you down this year?”

“Marcel Marceau?” the barber says, chuckling. “The mime? Hell. He wouldn’t have had anything to say anyway.”

“Yeah, that’s what I keep thinking,” I reply with a nod.

“Don’t move your head if you like your ears,” she snaps. I stop nodding.

Very carefully, I continue. “I got a nice rejection letter from Tom Lehrer. An old songwriter,” I explain. “He wrote ‘Poisoning Pigeons in the Park.'”

Lehrer wrote: “I think you’re on to a good idea with your column. I would not, however, be interested in participating.” He went on to explain that he never does interviews unless he’s “plugging something,” and added, “I know, I know, this is a conversation, not an interview. Well, for me it would be an interview.”

I was also turned down–after my seventh request–by John Gray.

“The Men Are from Mars guy?” she mutters, attacking my head with a stiff brush.

“That’s him,” I affirm. “His assistant called and left a message. ‘Dr. Gray does not want to do this. He will never want to do this. He never has any spare time whatsoever, and though he loves going to the movies, he never goes to movies that he has to think about.’ ”

“Figures. His books are stupid anyway,” she says. “Who else?” She now slathers my neck with warm lotion and pulls out the steaming straight razor.

“I also invited Matthew Fox to see The Mummy in May,” I tell her, referring to the famous defrocked priest, “but he was sort of offended at the idea.”

“A priest? Shoulda asked him to see Stigmata.”

“I tried that in October,” I mention. “He was offended all over again.” I mention that several people, including commentator Jim Hightower, biblical scholar Stephen Mitchell, and that spiritual debunker known as The Amazing Randi, have agreed to do a movie–when the right film comes along.”

There is no immediate reply. She appears to be thinking.

“Hey. Did you ever take a barber to a movie?” she asks, the straight razor resting menacingly against my neck. “We’re ‘interesting people,’ you know.”

“I never have,” I reply, being careful not to shake my head. “But I’ll certainly consider it in the future.”