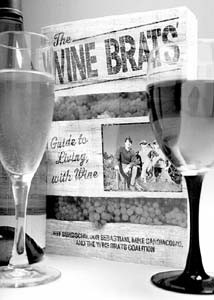 Primer cuts: Something for everyone in this new guide to wine.

IT IS BOTH intriguing and annoying that people will spend their hard-earned money to buy books titled The Idiot’s Guide to (Whatever) or (This and That) for Dummies. Intriguing because purchasing such tomes instantly labels one as an idiot or a dummy. The plot thickens when one of these books is bought as a gift, the obvious inference being that the recipient–presumably a relative, friend, or business associate–is somehow lacking mentally or socially. Not since Don Rickles’ heyday has so much commerce been spawned by insults.

So much for the intrigue; we’ll get to the annoying part later.

The Dummies franchise has published several wine-themed books, including narrowly focused ones that deal with white wine and champagne, respectively. As primers, which they are meant to be, these books are quite concise, fairly clear, and refreshingly accurate.

But if one seeks both information and entertainment in their reading, I suggest dumping the Dummies and embracing the Brats. Regardless of one’s wine knowledge level, The Wine Brats’ Guide to Living, with Wine (St. Martin’s Griffin; $16) is sure to bring a smile.

Three men with Sonoma County wine-industry roots–Jeff Bundschu of Gundlach-Bundschu Winery, Jon Sebastiani of Viansa Winery, and Mike Sangiacomo of Sangiacomo Vineyards–are the ringleaders of this publishing enterprise, with chapters contributed by various members of the Wine Brats Coalition.

The Brats describe themselves as “an active group of adult wine enthusiasts who are mostly young in age but absolutely young at heart.” Their mission is to spread wine enjoyment among a new generation of imbibers by eschewing the somewhat elitist image foisted upon wine by an aging wine press and, in some cases, by their own parents.

The concept that wine is a beverage to be enjoyed, rather than feared, is promulgated by the anti-wine establishment verbiage contained in the book’s section and chapter titles, among them: “Real People, Real Wine”; “Adventures in the Wine Aisle, or A Taste of Wine Shopping Know-How”; “It’s My Party and I’ll Wine If I Want To, or Party Theme Ideas”; “Gettin’ Dirty with the Winemakers”; “In the Vineyard of Good and Evil, or Days in the Life of a Winemaker”; “Wine Mumbo Jumbo, or Wine Terms and Definitions.”

Beringer Vineyards tour guide and wine educator Kim Caffrey gets the anti-snob ball rolling with a chapter titled “The Nose Knows, or Tasting Versus Drinking.” Included is a sidebar, “Taste Like a Snob,” that includes the following advice:

“Pour a splash of wine in your glass and play along with me. Hold the glass by the stem–hence the name ‘stemware.’ Holding it by the bowl points you out as a beer drinker.

“If you want to look extremely affected,” Caffrey continues, “find something you can lean against so that you may shift your weight to one hip–and hold the glass by the base with your pinky extended.”

Three additional pomposity-busting suggestions are included, and Caffrey concludes the sidebar with these encouraging words: “That’s all there is to it! Now you’re ready to go wine tasting with Biff and Muffy!”

WHEN IT COMES to wine appreciation, a little bit of knowledge isn’t necessarily a dangerous thing, but it has been known to create Biffs and Muffys. Caffrey is right on target with her characterization of the overly affected; when it comes to prose, she’s a pro.

Sadly, the same can’t be said for Tim Hanni, described as “the most entertaining, down-to-earth Master of Wine walking the planet today.” Hanni is both entertaining and down to earth, and his chapter titled “Forget Everything You Know about Food and Wine Pairing (Self-Explanatory)” offers some sound advice and suggests a few fun experiments. (We tried them; they are fun.) But he does a disservice to the book’s target audience–newcomers to wine–by strongly promoting the “if you like it, it’s good” mantra currently popular among a growing legion of wine pundits (a majority of whom, not surprisingly, are in some way involved in the sale of wine).

By suggesting that there are no wrong answers when it comes to food-and-wine pairing, and pooh-poohing the “classic” combinations, he inadvertently causes more confusion than he alleviates.

Especially for a beginner, the tried-and-true “red wine with red meat, white wine with chicken and fish” guideline is much easier to understand than the flavor-focused system he recommends, which covers more than 10 pages of the book.

A primer, which the rest of this book is, should promote the basics–the “classics”–and save the more advanced theories, accurate though they may be, for an intermediate sequel.

Because this was a work both envisioned and written by committee, it lacks the cohesiveness that a single voice, or a more attentive editor, would have provided. It reads more like a mishmash of magazine articles than a well-organized, smoothly flowing book. These small criticisms aside, The Wine Brats’ Guide to Living, with Wine is enjoyable, enlightening, and thoroughly engrossing.

But it does share one annoying commonality with its “Idiots” and “Dummies” cousins: I wish that I had thought of the idea.