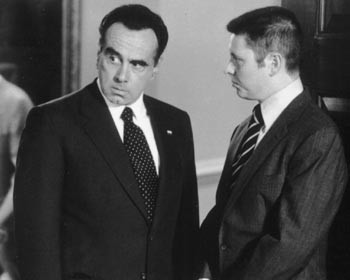 Writer David Templeton takes interesting people to interesting movies in his ongoing quest for the ultimate post-film conversation. This column is not a review; rather, it’s a freewheeling, tangential discussion of life, alternative ideas, and popular culture.

“WELL, that settles it,” barks Debi Durst, as the lights come on and we stand up to leave. “We can now safely say that Richard Nixon was the best Dick we’ve ever had in the White House.”

Later, they bump into Liddy again, this time on a high school tour of the White House, and are soon being questioned by Dick–excuse me, President Nixon–himself. Thinking the girls might know something, he makes them his official dog-walkers. Before long, the well-meaning twosome have escalated the president’s increasing paranoia–they get him hooked on marijuana-laced cookies–and sabotaged his cover-up scheme: they record eight-and-a-half minutes of Olivia Newton John love songs on his secret Oval Office tape machine.

When Nixon begins to show his true colors–cursing, breaking laws, kicking the dog–the girls hatch a plan to ruin him. Remember Deep Throat, the mysterious informant to Washington Post whistle-blowers Bob Woodward and Carl Bernstein? Well, guess who she was?

“Just goes to show you,” Durst remarks, “it doesn’t take much to bring down a Dick.”

DEBI DURST–she’s married to political humorist Will Durst–is something of a San Francisco legend. A determinedly eccentric stand-up comic and sharp-tongued satirist with a great laugh that sounds like Woody Woodpecker on uppers, she’s been a major mover-and-shaker on the Bay Area comedy scene for years. I was charmed to learn that Durst was also the voice of the “Corpse Kid”–“There goes Christmas!”–in Tim Burton’s Nightmare before Christmas.

Wearing a vintage, handmade red-white-and-blue jacket–“I don’t know anyone who didn’t make something out of an American fag at one time or another,” she says–Durst leads the way from the theater and into a nearby bar. She’s clearly ready to talk.

“Unlike a lot of kids today, who don’t know Dick,” she says, grinning, “I know quite a lot about Dick. So ask me something.”

“John Belushi would have been great in this part,” she adds. “I’m really sorry we never got to see John Belushi’s Dick.”

“Hmmmm. Are the Dick jokes ever going to peter out here?” I want to know.

“Good one. And probably not,” Durst says, laughing. Later, at my inference that the film might have been a bit far-fetched, even for a satire, she says, “Not a bit. I didn’t think Dick was too hard to swallow at all.

“Prepare yourself,” she cautions. “This could go on for hours.”

“DID YOU SEE that couple in front of us, with the kids?” Durst says, a little later. “You could tell they were sitting there going, ‘Jesus, how do we explain this?’ They’re going to have to go home and have a history lesson now. God forbid.

“But seriously, if it wasn’t for Dick, we wouldn’t know dick. Think about it. Historically, presidential dirt was always covered up, ignored by the press–until Watergate came along and blew it wide open. White House cover-ups–cheating and lying and paying people to shut up–that goes way, way back.

“Nixon,” she observes, “was just the first Dick to get caught.”

“In the Kennedy days,” she continues, “the press kept its mouth shut about JFK’s little peccadilloes. But after Dick–let’s just call it A.D., shall we?–it’s been open season on presidents.

“It’s funny to think about it now,” she goes on, “but back then we really did have this sense of respect for the authority and office of the president. It was, as we were taught in school, ‘the highest office of the greatest country on the planet!’ God bless America! Now it’s kind of unthinkable that anyone would completely trust the president.”

I recount my memory of watching Nixon’s famous resignation on TV (followed, on one Los Angeles radio station, with a live rendition of Ding Dong the Witch Is Dead). Durst was in college at the time.

“We were rehearsing a play in the theater building,” she recalls, “and the teacher came running in shouting, ‘He’s quitting! He’s quitting!’ We all started shouting, and ran into the office where there was this little tiny television–and there he was, giving his speech, saying ‘You’re right. I’m wrong. I’m leaving. Now you won’t have Dick to kick around anymore.’

“After that, it was like a great big party. We ran outside to see if anyone else had been watching, and everybody was there, standing around laughing, shouting, mouths hanging open. We were kind of giddy. We kept saying, ‘It’s over. It’s over. Things are gonna be better now.’

“So what I want now,” she goes on, “is more Dick. The movie, not the guy. I mean, who knows how much Dick they had to chop to make this a two-hour movie.