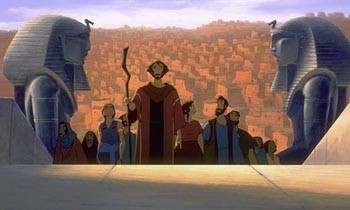 Writer David Templeton takes interesting people to interesting movies in his ongoing quest for the ultimate post-film conversation. This time out, he discusses Dreamworks’ ultra-reverent animated Moses movie The Prince of Egypt with the infamous and unflinching Bible scholar Jonathan Kirsch.

THE PRINCE OF EGYPT,” begins the eloquent, soft-spoken gentleman on the other end of the line, “is a visually stunning movie, a very successful work of animation. I must first say that. But the other thing I have to say is that it is a children’s movie. They have therefore chosen to leave out the awkward and embarrassing and sometimes shocking details of the life of Moses that actually appear in the Bible, details that make Moses a much more interesting figure than he is in Sunday School Bible stories or in the Charlton Heston movie–or for that matter in The Prince of Egypt.”

Jonathan Kirsch is speaking to me from the L.A. office in which he practices “intellectual property law,” a subject he has written about in various volumes. His best-selling book, 1977’s The Harlot by the Side of the Road: Forbidden Tales of the Bible–an exploration of seven biblical stories that are routinely left out of sermons and Sunday School lessons because of their graphic sex and violence–achieved a certain level of widespread infamy, as has his latest book, Moses: A Life.

In his new book, Kirsch shows his fascination with scriptural trouble spots by revealing the numerous foibles and contradictions that make Moses one of the most fascinating figures in religious literature: a non-heroic hero who broke many of the same commandments he brought to the Hebrews; a man who, according to Kirsch, showed signs of mental illness; an angry, defiant man who hid a facial disfigurement behind a veil for most of his life; a man who dreamed of entering the promised land but was denied that dream after committing a petty offense–he brought water to the Hebrews by hitting a rock with his staff, instead of ordering the rock to give water, as God had told him to–a crime so small as to call God’s own sanity and reason into question.

Above all, Moses was a man who stood up to God, sometimes even forcing God to back down. Though he later punished all those who did not respect God, Moses stood before the burning bush and demanded that God tell him his name. “I am that I am” was God’s cryptic answer.

The Prince of Egypt, of course–which had input from Jerry Falwell and hundreds of other religious leaders and others with a stake in protecting Moses’ saintly image–shows us none of Moses’ more troubling aspects. Not that it’s all fun and games: the 10 plagues–condensed into a single musical number–are rather malevolent, and the Angel of Death claiming the lives of thousands of children is certainly going to inspire some discussion on the way home from the theater. “There are things in the film that are difficult to deal with, no question about it,” Kirsch affirms. “But there is still much more bloodshed and violence and divine cruelty in the Bible than ever got into The Prince of Egypt.

“I’m not condemning the filmmakers, I want to make this very clear. The Prince of Egypt is not meant to be for an R-rated audience. The book I wrote is an R-rated book–it is for grown-ups.”

I MENTION a review of the film that began by saying–tongue-in-cheek, I suspect–that kids are never too young to learn that God will gleefully kill off the children of his enemies.

A merry burst of laughter spills out from the phone.

“I have to credit Dreamworks for that,” Kirsch relies. “They did show the Angel of Death taking the lives of little children. Because when you ‘pretty up’ God in Sunday School class, and make him into a big benign grandfather in the sky, you’re really straying far, far from the vision of God that actually appears in the Bible. The truth is, there are things in the Bible that would scare the wits out of any child.”

For instance, Kirsch notes those troubling passages in Exodus–explored in both of his own books–in which God sets out to kill Moses, but fails when Moses’ wife performs a circumcision. And no, that’s not in the movie.

“So you have a human telling God what to do, and changing God’s mind. The all-knowing, all-seeing, all-powerful God, who we are told has a divine plan, of which we are part, is talked out of doing something by a mere human being.

“And that to me is one of the great defining moments of the Bible, period. Because it teaches us that meek compliance with God’s will is not always the appropriate stance. Sometimes we should talk back to God.”

Try to teach that in Sunday school.