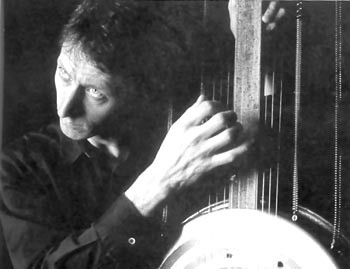 Opening the eyes of the ears

THE RECENT POPULARITY of Stomp–the raucous theater piece in which performers use such commonplace objects as trash-can lids, push brooms, and kitchen utensils to create irresistible dance rhythms–has mainstreamed the art of experimental musical instruments, which boasts among its major figures Bart Hopkin, a Nicasio resident and local musician who has arisen as this crazy genre’s keeper of the archives.

Orbitones is the second volume of experimental sounds from Hopkin–1997’s critically acclaimed Gravikords, Whirlies & Pyrophones was hailed by Billboard (the trade industry magazine that curiously does not include gravikord music on its charts) as “singularly eclectic … an enlightening look at the myriad of ways in which music can be made.”

Like its predecessor, Orbitones is an amazing journey, meticulously documented and compiling tracks from most of the genre’s most creative minds. The release includes a single 16-track CD tucked into a 96-page full-color hardbound book with a foreword by synthesizer pioneer Robert Moog and featuring an exhaustively researched series of essays on the anthology’s contributors, including avant-classical composer John Cage and Aphex Twin synthesist Richard James. The tracks veer wildly from the fanciful tonal complexity of the Latvian group ZGA’s “Back to the East” (performed on their wonderfully odd zgamoniums) to the innovative industrial noise of local musician Tom Waits’ “Sewing Machines, Squeaky Doors, and the Spin Cycle,” replete with Waits chanting the Singer-inspired “Babbachichiuija” throughout.

These strange sounds demand that we question our tired concepts of what comprises music, and force the listener to open up to the music that is all around us–not always celestial, but often strangely satisfying. As Waits says, this music has “opened up the eyes of my ears.” Who could ask for more? GREG CAHILL

Dale Watson and His Lone Stars The Truckin’ Sessions Koch

WHILE NASHVILLE gazes at its collective navel and trots out a parade of confused pretenders, Austin-based Dale Watson looms over popular country music as a man among pretty boys, a cutting-edge throwback, a maestro of supersonic honky tonk. In a more sensible era, he would be recognized as a legend in the making. Regardless, he remains the only emergent artist who could get away with singing, “I’m too country now for country/ just like Johnny Cash.”

Watson’s fourth release, The Truckin’ Sessions, finds him in signature form: a thunderous baritone, red-hot six strings, and a collection of songs that roam from diners to interstates, heartaches to temptations. The twist this time is that, as the album’s title implies, all of the tunes orbit a truck-driving theme. Lesser artists would implode amid such a seemingly narrow parameter. Watson, however, seems to thrive on the challenge, cranking out 14 diverse numbers that engage flat tires, roadside lust, trucker ethics, caffeine addiction, engine trouble, radio banter, and even an “everyday knuckleclutchin’, gearjammin’, supertruckin’ loose nut behind the wheel.”

In some ways, releasing a theme album that appeals to such a specific subculture seems like a bizarre career move for a performer struggling to establish himself in the public’s listening consciousness. On the other hand, it’s rather refreshing to hear an artist so blatantly follow his heart and inspirations. If career moves were all that Watson worried about, he’d be in Nashville hanging out with all those gutless purveyors of the “crossover effect” that is turning country into some sort of bastard child of pop.

Newcomers to the Watson oeuvre might find The Truckin’ Sessions a little overwhelming, sort of like a shot of homemade whiskey on an empty stomach. It can never hurt to acclimate oneself to the artist through his stunning debut album, Cheatin’ Heart Attack, or last year’s masterful I Hate These Songs. But when the road beckons, when the Pink Poodle Coffee Shop glows amid an endless highway night, soundtracks don’t get any better than The Truckin’ Sessions. CHRISTOPHER WEIR

Plaid Not for Threes Nothing

FEATURING guest appearances by two of electronic music’s premier divas, Plaid’s latest album is at once sophisticated and exuberantly whimsical. From the vertiginous tempo changes in the breakbeat-based “Headspin” to the marimba-spiked island sounds of “Myopia,” most of the tracks on Not for Threes have a relaxed playfulness–they’re downtempo but upbeat. But there are also moments of passionate, sad beauty, including the sinister “Extort,” with snaky, sublime vocals provided by former Massive Attack guest chanteuse Nicolette. Pixie queen Björk sings on “Lilith,” the strange, sultry otherworldliness of her voice perfectly matched to the hypnotic tattoo of exotic, organic bass and crystalline bells. It’s a fortuitous collaboration, since both Björk and Plaid match their abundant quirkiness with bold, nearly delirious musical inventiveness. MICHELLE GOLDBERG