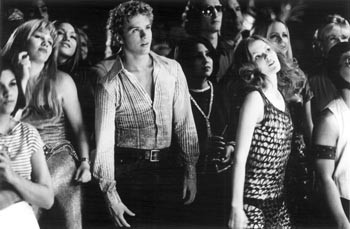 MAUREEN REGAN leans forward, sliding her giant mocha latte out of the way to make room for her elbows. A dreamy, faraway look has drifted momentarily across her face. It’s the look of hopeless, unstoppable reminiscence–blossoming suddenly into full-blown nostalgia.

“How do you depict absolute and complete decadence?” she asks. “How do you capture the intensity of that on film?”

It is, of course, a rhetorical question.

“You can’t,” comes her answer. “You can give a taste of it, the general idea of it–but that’s all. That’s what Studio 54 was–absolute and complete decadence. It was freedom. You walked through those doors–if you were lucky enough to get in–and you were allowed to be totally free. But you had to be careful, and a lot of people got hurt.”

The film, an entertaining but aimless stewpot of gaudy ’70s kitsch, succeeds best in its depiction of Rubell. The over-the-top extravagance of Studio 54’s shenanigans is resurrected in sufficient measure to give outsiders some idea of what kept regulars like Regan–who was a fixture at Studio 54–coming back night after night.

Born and raised in New York City, Maureen Regan–the younger sister of Regan Books publisher Judith Regan–was 18 and a freshman at NYU when she first began frequenting Studio 54. It was 1979, and, according to Regan, it was she who instigated the much-talked-about “Studio 54 food fight” when she flung a sticky handful of birthday cake at Christie Brinkley’s boyfriend (the now deceased Oliver Chandon). With dreams of becoming the next Donna Summers (she recorded one disco album, featuring songs such as “A Good Man Is Hard to Find; A Hard Man Is Good”), Regan remained a club regular until her graduation–around the time Rubell was busted for tax evasion and other charges and sent off to prison.

During that time, Regan went dancing almost every weekend.

“I loved disco,” she admits, with nary a trace of shame. “It gets a bad rap now, but no one can tell me that disco wasn’t fun.”

Nowadays, Regan is busy shaking a different kind of booty, having made a name for herself as the upstart literary agent who landed a million-dollar book deal for her very first client–Jefferson Airplane’s enigmatic Grace Slick. The book, Somebody to Love: A Rock and Roll Memoir, has just been published by Warner Books. With that success as her calling card, Regan has gone on to sign an eclectic stable of writers, artists, and “big names,” including actor Don Johnson.

A lot of years have gone by since my guest hung up her dancing shoes, but watching the movie tonight has catapulted Regan into a full-on sentimental reverie.

“Studio 54,” she tells me, carefully trying to explain the club’s appeal, “somehow encapsulated all the decadence of the ’70s into one specific place and time–all the players were there, all the celebrities, all the elements of drugs and music and sex. It was like the Roaring ’20s in Manhattan. Average people could mingle with stars–you’d be standing next to Andy Warhol or Bianca Jagger. It seemed as if there were no distinctions between the classes there. It was an illusion, of course–the stars would mingle with the common people, but then they’d retire to the private VIP room–but it was an amazing thing to experience.”

In the movie, the bartenders were stars in their own right.

“Oh, absolutely,” Regan agrees. “Forget the stars–most of my girlfriends were trying to get laid by one of the bartenders. That was their hobby, their goal. To be with a bartender from Studio 54, that was something special.

“I never did any of that, though,” she adds, laughing. “Fortunately, or unfortunately, I never engaged in any of the drugs, the sex, and all that other stuff that was going on. I watched. I saw it all. I pretended to have a sinus infection so I could turn down all the offers of coke. I was aware from the first time I stepped into Studio 54 that this was not life–this was a fantasy, and I knew that if you weren’t careful, you could get completely carried away in all of it.”

Another aspect of the Studio 54 experience–detailed in a number of the movie’s scenes–was the renowned difficulty of getting inside. Rubell apparently enjoyed wielding his power to choose who was in and who was out.

“It’s true, it’s true,” Regan affirms. “You’d go and you’d line up like that, you’d try to push yourself to the front–so you could show your face and pray that the guy standing at the door was going to like the way you looked.

“The thing about Steve Rubell,” she says, “is that he could be very sweet and very demonic in the same breath. He would sometimes leave a thousand people standing out on the sidewalk, when only a hundred or so were inside the club. He’d do it for the hell of it.”

She pauses, that wistful, nostalgic look returning to her face.

“I’m not saying it was all great,” she admits. “Some nights were pretty iffy. But, even so, it was a very special time.”

“Sure,” she says, slowly. “There’s a piece of me that wishes it could live in that moment again. I’m probably just remembering what it was like to be 18 and young and full of that incredible sense of aliveness–that freedom.

“And I’m telling you–that was the most alive I’ve ever felt in my life.”