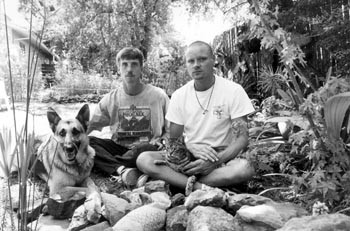 Goin’ to pot: Ed Learn and Will Larson had a run-in with local sheriff’s officials who claim the men had no authority to raise medicinal pot plants.

IN THE AUGUST HALLS of the county administration building an old man with a leg amputated below the knee sits in a wheelchair. Nearby, a middle-aged woman missing her right hand and lower right leg talks energetically, while another woman with multiple sclerosis walks with hesitant steps.

They are all gathered for one reason: the right to grow and consume medical marijuana without police interference. That right became state law with Proposition 215, the Compassionate Use Act of 1996. But law enforcement officials have been slow to comply.

Fortified with hundreds of petitioned signatures and 10 speakers last month, medical marijuana supporters asked the county supervisors to turn down $250,000 in state funding for the Campaign Against Marijuana Planting.

Mary Pat Beck, Sonoma Alliance for Medical Marijuana spokesperson, argued that CAMP operations have victimized medical marijuana patients with busts by out-of-town CAMP officers whose gung-ho, guns-drawn tactics disregard local guidelines and violate civil liberties. “This appears to be an abuse of authority by an outside force,” says Beck.

The testimony of SAMM members, District Attorney Mike Mullins, and Sheriff Jim Piccinini sparked a discussion among the county supervisors that was sympathetic toward medical marijuana patients. But the CAMP funding was approved nonetheless as part of the Sonoma County Sheriff’s Department’s $60.5 million budget.

“I am disturbed about continued reports I get of CAMP activities that are not consistent with county efforts,” says 5th District Supervisor Mike Reilly.

First District Supervisor Mike Cale, an ex-cop, says he is “not sure” CAMP has been operating with sufficient respect for civil liberties and the U.S. Constitution.

The CAMP money comes from the state Department of Justice and funds the salaries of a prosecutor in the District Attorney’s Office and two sheriff’s detectives.

Beck told the Independent that recent raids on medical marijuana gardens, both by CAMP and by local law enforcement officers following Sonoma County guidelines, have fostered a climate of fear and anxiety among chronically ill patients who worry about the security of their medicine and designated “care-growers.” Some, she said, are afraid to leave their homes for fear their prescribed marijuana will be taken in their absence.

Now, at the height of the pot-busting season, relief may be coming for the medical marijuana community. An agreement is in the works between Mullins and the Sonoma County Medical Association to allow a panel of physicians to adopt a verification process for medical marijuana patients. The plan would provide patients with certification from a panel of approved doctors recognized by Mullins.

Sonoma County Public Health Director George Flores, chairperson of the medical association’s medical-marijuana subcommittee, hastens to point out that the verification process would be entirely confidential between doctors and patients. Patients could then decide for themselves whether to share their verified status with the District Attorney’s Office.

Currently, law enforcement guidelines for distinguishing between legal and illegal marijuana give considerable discretion to police officers, but provide them with no information about what kind of pot gardens are appropriate. Beck says that even the existing guidelines, the same rules SAMM claims CAMP ignores, invade the privacy of individuals and need to be changed.

THE NEW verification agreement won’t come soon enough for three chronically ill men in Santa Rosa. In mid-August, sheriff’s deputies confiscated all their indoor pot plants when they weren’t home. The raid left them without the medicine they say is taken with the knowledge of their doctors and that has significantly improved their health.

Edward Learn, 33, and William Larson, 29, are both HIV positive. Larson, who is also diagnosed with wasting disease, is employed as the caregiver of his friend and next-door neighbor Robert Bohnenkamp, 72, who suffers from chronic cardiovascular disease, as well as glaucoma and arthritis. “The only other way Robert could cope with obstacles that have faced him in the last year would be a morphine drip and sitting in his home,” says Larson.

“We do use marijuana medicinally, and we can’t afford it. Plus, it’s illegal to buy it,” says Larson. “So, under the provisions of Prop. 215, we decided to cultivate a small medical marijuana garden exclusively for the three of us. It worked out great for the last two years. We supplied ourselves with marijuana without involving any outside parties at all.”

Larson says their garden of 50 pot plants, all in various stages of maturity, provided a weekly harvest of about a half ounce for the three men. “A couple of joints a day was really plenty,” he says.

After his frightened landlady discovered the garden and called law enforcement officials, Larson claims to have called a sheriff’s detective about the medical nature of the garden. Larson says he invited the detective to visit the garden to observe its authenticity. Instead, “he starts to challenge the validity of my illness, of my partner’s illness, and of Robert’s,” says Larson. “And he doesn’t know anything about us at all. And then he challenges our role as caregivers.”

Larson left notes posted in his kitchen, reportedly verifying the men’s prescriptions. Sheriff’s deputies showed up at the house while the men were out, determined the prescriptions were invalid, and confiscated the plants.

Sheriff’s Lt. Mike Brown, who participated in the raid, says the letters of recommendation from Larson’s doctor were a few years old, so he contacted the doctor, who said he didn’t authorize medical use of marijuana.

“What are we left to do?” asks Brown.

What appears as heavy-handed police work to Larson may have been a sheriff’s deputy simply following the rules. Official guidelines for investigating medical marijuana require police to ask eight rather personal questions, including the name of the doctor who has prescribed or recommended marijuana; the nature of the illness the patient suffers from; the duration of the condition; and the amount of marijuana used per day. Refusal to answer the questions is grounds for arrest.

Police are also instructed to obtain a signed medical-records release from the patient, although refusal to sign the release does not result in arrest.

“The partial remedy that is being proposed by this process involving the medical association would go a ways to avert or prevent the kinds of circumstances … [in] which people are being questioned by non-medical providers about their medical circumstances, and possible intrusion into privacy and confidentiality,” Flores says.

Meanwhile, Lt. Brown agrees that local guidelines need improvement. “Quite frankly, that’s been one of the frustrating areas for everyone, including us,” he says. “No one has told us how many plants are appropriate for whatever condition. Unfortunately, it’s left at this point to the officer on the scene, and, quite frankly, we would welcome more direction in that area.”

But critics point out that the guidelines make no mention of pot gardens or what defines a reasonable amount of medical marijuana. The guidelines, they say, allow for arbitrary enforcement of the law.

Also, while medical marijuana growers like Larson note differences between seedlings and mature, medicine-producing plants, to Lt. Brown, “a plant is a plant.”

ATTORNEY WILLIAM Panzer of Oakland, co-author of Prop. 215, notes that the federal government gives eight authorized patients in the United States each a half pound per month, or two ounces per week. The city of Oakland now bases its new guidelines on the federal standard.

Brown expresses his disagreement with that policy. “That’s a lot of marijuana,” he says. “If we come to your house, and you have three or four plants or whatever, and you have a doctor’s authorization to have that for your condition–we’re out of here, we’re leaving you alone. We hope you feel better.”

SAMM also wants the county to adopt guidelines similar to those recently adopted in Oakland. Under those rules if patients cannot show a valid doctor’s approval they get a “fix-it ticket” and have two working days to show it to law enforcement officials. SAMM wants no bust of gardens with less than 150 plants unless there are indications of illegal activity. And if a police officer is unsure about a garden, photographs, sample leaves, identification, and affidavits are taken.

“We feel we have a very good working relationship with the sheriff and district attorney,” says Beck, “but it seems like Will and Ed have been taken advantage of. We don’t understand. We’re confused.”