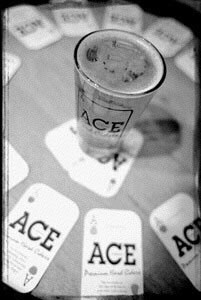 Eating your way through the North Bay

Back in the old days (circa 1992), I used to drive two hours to Cleveland in blizzard conditions to get Brie. And not even good Brie. It was hard, tasteless, mostly rind and probably made in Bulgaria. People looked at me funny when I bought it and asked why the heck did I want to eat something weird like that. Nice girls eat piroshki, dontcha know.

But some of us yearned for more. We heard whispers of a promised land out West where people ate bizarre things like sushi, giant salads and this really crazy stuff called goat cheese. Those of us who were lucky–and I mean really, really lucky–eventually made it to the Bay Area. The especially blessed among us find ourselves smack dab in the North Bay trying to eat our way across three counties, never once looking back–except maybe to find some really good piroshki just for old time’s sake.

For all the wonderful things about the Midwest, food just isn’t one of them. And that’s why I stay right here amidst the cornucopia of earthly delights that is food made in the North Bay.

(Note: I’ve purposely chosen not to mention in any detail the many wonderful North Bay wineries and fruit and vegetable farms. I cover wineries in my weekly “Swirl ‘n’ Spit” column, and I’ll lavish due praise on our local farms come the spring growing season.)

About a year ago, Cowgirl Creamery (80 Fourth St., Pt. Reyes Station, 415.663.9335, www.cowgirlcreamery.com) became the Paris Hilton of cheese. Suddenly, it was everywhere–glossy magazines, fancy food shows, on the tables of A-list celebs. Frankly, we wouldn’t have been surprised to hear about an upcoming movie deal. Headed up by a Chez Panisse alum, Cowgirl has good breeding. Starting with organic milk from Tomales Bay’s Straus Family Creamery (www.strausmilk.com), home of those cute little glass bottles of milk and cream, the cheese is still made in relatively small batches in a converted Point Reyes barn.

But for every Paris there’s a lovely Nicky (or two) quietly plodding away in the background. Less glamorous, but every bit the tasty little dish, Petaluma’s Rouge et Noir (500 Red Hill Road, Petaluma, 707.762.6001) has been turning out wheels of Camembert for more than a hundred years. Further east, the Sonoma Cheese Factory (2 Spain St., Sonoma, 707.996.1931) has dibs on Sonoma Jack, offering fragrant factory tours to the delight of curd-loving spectators.

Neighbor Vella Cheese (315 Second St., Sonoma, 707.938.3232) has its own take on Dry Jack inside the stone brewery turned cheese factory that has housed it since Prohibition. If you’re lucky, you’ll find seventy-something Ig Vella at the factory, still overseeing the company his father began in the 1930s. Long considered the godfather of American artisan cheese, Vella and his family have inspired several generations of small-production cheese makers.

Those favoring a goatier sort of cheese can get their fix from the cloven-hooved gals at Sebastopol’s Redwood Hill Farm or, my personal favorite for all sorts of cheesy salads and spreads, Laura Chenel‘s chévre (both Redwood Hill and Chenel products are available at specialty grocery stores).

What happens to the expectorated wine in all those spit buckets? Legend says it becomes pricey wine country vinegars popping up on grocery shelves across the country. Of course, this isn’t true (oh, Lord, we hope), but vinegar has always been a plentiful, acidic, pucker-inducing by-product of wine, going back some 5,000 years. Used as a panacea to cure everything from gout to sunburns to pesky hard-water buildup on Roman showers, vinegar is more than just a friend to the salad green. Helen of Troy, in fact, bathed in it. But at prices topping $15 a bottle these days, you may want to be more judicious in its usage.

B.R. Cohn Winery (1500 Sonoma Hwy., Glen Ellen, 800.330.4064) has some of the best vinegar in the North Bay. Using wine varietals–Cabernet and Chardonnay–as well as Champagne, Cohn’s vinegars vary from gossamer light to darkly heavy. Most other wineries throughout Napa and Sonoma also offer various takes on the classic.

Olive oil, while not directly tied to winemaking, is also a vineyard staple. There are 66 olive oil producers in Napa County, 43 in Sonoma–many of which are first and foremost wineries. Because olive trees thrive in a nearly identical climate and terrain as grape vines, they’re often planted together. Several producers, however, stand out. McEvoy Ranch (5935 Red Hill Road, Petaluma, 707.778.2307) has some 80 acres of olive trees, and produces a clean, grassy oil that’s wonderful for dipping. Also great are Asti Olive Oil‘s blood orange-infused extra virgin olive oil and Spectrum Naturals (both available at specialty stores), a growing organic-oils company that is garnering major national attention and arguably has one of the best lines of cooking oils to be found.

For those with their own trees, the Olive Press (1401 Arnold Dr., Glen Ellen, 800.965.4839) has a community press day on Sunday, Dec. 12, that allows amateur growers with well-tended fruit to have their olives pressed into oil. They also offer an impressive collection of local gourmet olive oils if you’re not quite ready to be the next oil baron.

I’d be remiss, of course, to forget mustard. The blossoming of mustard seeds in Napa’s vineyards is a welcome and celebrated rite of spring. So, as with boutique vinegars and olive oils, boutique mustards are, well, just about everywhere. This being California, no one actually eats plain mustard; one must add exotic spices and flavors. A few favorites: California Harvest‘s chipotle and lime mustard (www.grapevinetrading.com); Sonoma Mustard and Condiment Company‘s ginger wasabi mustard (available at Whole Foods, $4.95); and Kozlowski Farms (5566 Gravenstein Hwy, Forestville, 707.887.1587) has a huge selection of mustards as well as sauces, jams and jellies.

Drinking. Lots of It.

Nana Mae’s Organics in Sebastopol (708 Gravenstein Hwy. N., 707.829.7359) features the pressed juices and sauces from the 25-plus heirloom apple varieties on its family farm. And when apples get feisty and start fermenting, you get a little thing called hard cider, which can knock you on your butt with a wicked kick. Ace Cider (3100 Gravenstein Hwy. N., Sebastopol, 707.829.1101) has a comfortable brewpub with several ciders–apple, berry, pear–on tap. Also tasty are ciders from Healdsburg’s Sonoma Cider Mill (available at all fine markets), which are also available in pear and berry, as well as a sparkling apple cider created by a former winemaker.

Even feistier is St. Helena’s own vodka distillery, Domaine Charbay (call 800.634.7845 to learn where it’s sold), named Food and Wine magazine’s 2003 Vodka of the Year. Infused with juices like blood orange, key lime, grapefruit and Meyer lemon, Charbay vodkas make for some amazingly tasty cocktails. This I know for a fact.

Which is also why I know a whole lot about the wonders of a lovely cup of tea. Who knew that the Republic of Tea (800.298.4TEA) was located in Novato? I’m considering looking up the Minister of Well-Being and personally thanking him for my daily green tea.

Eating meat is a savage sort of thing when it comes right down to it. It’s why I refuse to eat lamb or veal–that’s my own boundary. Foie gras, however, is not. Whatever your stance, Sonoma Foie Gras (Sonoma Saveurs, 487 First St. W., Sonoma, 707.996.7007) offers a terrine that is amazingly tasty if we’re simply comparing apples to apples. Or livers to, er, livers. Petaluma’s Reichardt Duck Farms (800.338.DUCK) supplies most of the Peking ducks you see in the windows of Chinatown by 3am each morning.

As for Willie Bird Turkeys (5350 Hwy. 12, Santa Rosa, 707.545.2832), the pleasure of holding a giant drumstick is forever seared in my brain. A final favorite is Niman Ranch‘s applewood-smoked bacon (www.nimanranch.com). Perfect with eggs, and, well, right out of the pan. Mmmmm. Bacon. I’m just going to hold on to that thought for a little while.