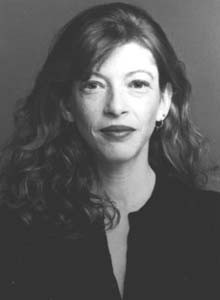 A FRIEND REMARKED that the photo of Susan Orlean inside The Orchid Thief dust jacket is the most striking author picture he’s ever seen. It is an arresting portrait. Orlean–who appears in Santa Rosa on Wednesday, Jan. 12–is a russet-haired, full-lipped beauty, and in the picture she’s staring dead-on at the camera with her arms folded, looking amused and flinty.

She has an unsentimental face, to say the least, the face of a person who might, seeing someone slip, watch to see how the person reacts–the face of a scientist, an observer, a cataloger, only made more complicated by the flare of vanity.

In The Orchid Thief (Random House; $25), Orlean catalogs a great many things: orchids, the bizarre behavior of people obsessed with orchids, the history of orchid collecting, and, best of all, the astounding personality of an orchid freak named John Laroche, a “tall guy, skinny as a stick, pale-eyed, slouch-shouldered, and sharply handsome, in spite of the fact that he is missing all his front teeth. He has the posture of al dente spaghetti and the nervous intensity of someone who plays a lot of video games.”

Laroche has hatched a scheme to steal prized ghost orchids from the Fakahatchee Strand preserve, a nearly impenetrable mass of swamp, forest, and prairie in the steaming southwestern corner of Florida. His plan to clone the endangered beauties in a Seminole-owned nursery has already gone awry, thanks to an untimely run-in with the local constabulary.

Orlean steps onto the scene just in time for Laroche and his Seminole co-conspirators’ hearing. The rest of the book chronicles her orchid education, her own hunt for the elusive ghost orchid in the slimy Fakahatchee, the history of the Seminoles, and her increasing bafflement with orchid fever and those stricken with it.

Orlean is more than up to the job. A New Yorker staff writer who appears in “Talk of the Town” frequently, she does “fly on the wall” better than almost anyone. Overhearing and witnessing are her specialties, and she reports her findings bluntly and with attention to detail, as if she’s simply cataloging truth, but with wry twists here and there. The result is a silk-spun story line threaded through with humor.

In this case, “there” is a lot of different places. From courtroom to swamp to cocktail gala to gator-wrestling pit at an Indian rodeo, the narrative ranges widely, occasionally dwelling too long in tiresome country, as when it too exhaustively recounts the rapacious ways of orchid collectors of yore.

Generally, though, a parade of colorful characters keeps the tempo lively: there’s Martin Motes, the Yeats-spouting orchid grower; Chief Billie, the Seminole statesman and country singer; Lee, the intrepid plant smuggler and publisher of Lee’s Armchair Adventurer; and many more, all fussing, bragging, joking, and coveting.

But at its heart, The Orchid Thief isn’t about any of these people or even about orchids. It’s about passion. Orlean, setting out to record the events around this trial, finds herself slowly pulled into a world where slight madness prevails, until she is taken hostage too–not by orchids, enchanting as they are, but by an amazed awareness of a different way of living.

“More and more,” she writes, “I felt that I was meeting people . . . who didn’t at all seem part of this modern world and this moment in time–the world of petty aggravations and obligations and boundaries, a time of bored cynicism–because how they lived and what they lived for was so optimistic. They sincerely loved something, trusted in the perfectibility of some living thing, lived for a myth about themselves and the idea of adventure, were convinced that certain things were really worth dying for, believed that they could make their lives into whatever they dreamed.”

Her initial wonder at the epidemic of orchid-love gives way to admiration and at times even envy, and she can’t help but notice that Florida’s otherworldly quality feeds the oddness. Between the unearthly landscape, the eccentric orchid growers, and the objects of their desire, Orlean has forged a fascinating adventure inlaid with an oblique commentary on the sterility of mainstream American life.

The fact that her story is about plants testifies to the book’s greatest truth: that passion is blind, often misguided, and impossible to justify–but always worth the ride.