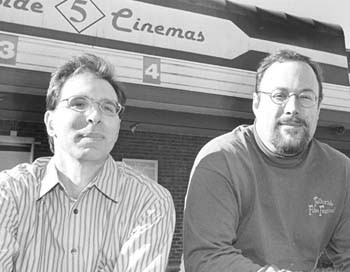 Independent views: Ian Price and Ky Boyd are transforming the aging Lakeside Cinema into a haven for films that run far outside the Hollywood mainstream. The theater reopens with fresh flicks on Jan. 14.

The new Lakeside Cinemas gears up to deliver indie flicks–but are we ready?

WANT TO CATCH Arnold dueling with the devil in End of Days or Pierce Brosnan blasting his way through The World Is Not Enough? No problem: You can head for virtually any movie theater in Sonoma County and be confident that your Hollywood blockbuster of choice will be playing on at least one screen–and maybe two or three.

But if you’re searching for a film that’s unusual, challenging, offbeat–or, God forbid, foreign–you might run into a nasty little problem. It’s what local film buffs call the “Will it ever get here?” syndrome. Independent films that dazzle and delight audiences in San Francisco often march north at a snail’s pace, and despite the valiant efforts of a few local theater owners, many movies–films like Boys Don’t Cry or Perfect Blue–never reach Sonoma County at all.

That may be about to change. If Ian Price and Ky Boyd have their way, local film fans will find themselves sticking around home base a lot more often to get their dose of indie flicks.

On Jan. 14, the two men will swing open the doors on the newly renovated Rialto Cinemas Lakeside, boldly going where no Sonoma County theater owners have gone before by presenting the public with five screens dedicated to independent features, documentaries, classic movies, and . . . gasp . . . even foreign flicks.

Which leaves a lot of people asking one very big question: Are we ready for this?

“I think so,” Boyd replies with a cheerful briskness. “All of our research indicates that you are. I think it’s interesting because I think the people who most don’t think Santa Rosa is ready for it are the people in the mainstream movie business. The reactions of other people have just been amazing. So that’s really encouraging.”

Sitting side by side at a table in a local coffeehouse, the two partners seem an odd match. Boyd, 35, is slender, chatty, and prone to laughter, eagerly rattling off facts and figures to explain why Sonoma County is a ripe market for an art house. The stocky and reticent Price–who has more than a decade of experience in the theater business and often serves as a projectionist at the Telluride Film Festival–lets his partner do most of the talking, content to occasionally interject a brief anecdote or some quiet irony into the conversation.

But neither man stays silent when the subject turns to their love of independent films. For some 15 years, since they met and became friends at the University of Montana, Boyd and Price have shared the dream of opening a theater dedicated to films outside the mainstream Hollywood fare.

“Independent films are about life,” says the 37-year-old Price. “They’re very simply about life. Whereas a lot of the commercial films are about not very much. . . . It’s nice to see a film that makes you want to talk about it afterwards, as opposed to just forgetting it as soon as you walk out of the theater.”

Boyd first plunged off the cinematic beaten path as a college student, when he happened upon a screening of Diva, the stunningly stylish suspense film from French director Jean-Jacques Beineix about a young opera fan who accidentally becomes involved with the underworld.

“I had never seen anything like it,” Boyd explains. “In Great Falls where I grew up, we didn’t have a theater that showed independent or foreign films. I saw all the studio stuff. And this was just so different. I was just like, ‘Wow, that was really cool.’ ”

That’s exactly the response the two men hope to evoke from Santa Rosa filmgoers with the first month of movies at the new Lakeside. Just days after the old lease expired and the old management moved out, the posters advertising Toy Story 2 were replaced by new ones for Some Like It Hot (opening Jan. 14) and In Search of Kundun with Martin Scorsese (opening Jan. 21).

Also slated for the marquee are Edge of Seventeen, a film about growing up gay in the Midwest that opens on Jan. 28, and West Beirut, a stunning coming-of-age story about two young friends in war-torn Lebanon that opens Feb. 11. Even Perfect Blue–the acclaimed anime feature–is coming, opening on Feb. 18.

But fresh flicks are not the only change at the Lakeside. A serious physical renovation is also under way, and the price tag for the transformation of the old theater into a shiny new art house will eventually reach $100,000. Among the changes planned are new projection and audio systems and tons of fresh paint and new carpet. The ticket booth will be moved inside, and the video games will disappear to make way for tables and chairs for a cafe.

“The renovation is about creating a new identity for the theater,” Boyd explains. “We want to build a core audience of adventurous filmgoers who think anything playing at our theater is probably worth seeing.”

Of course, this new venture is hardly the only spot to catch indie flicks in the county. The Independent Film Series at Sebastopol Cinemas and in Petaluma’s Washington Square brings offbeat flicks to the screen every Wednesday and Thursday night, and the Sonoma Film Institute continues to provide adventurous programming on the weekends at Sonoma State University.

What will distinguish the new Lakeside is the theater’s commitment to relatively long runs of independent films. Movies will play for at least a week instead of a couple of days. But Boyd adds one caveat: not every film will be independent. The next Star Wars movie will not appear on the Lakeside’s marquee, but you might see something like Shakespeare in Love or Tea with Mussolini.

“I think it’s going to be a mix,” Boyd explains. “There are films that are released by the major studios, what I call Hollywood story films, that are not your traditional studio offering. It’s what they call prestige films. Those are films that we want to go after because they fit the demographic that we’re appealing to.”

Moreover, though both men say they were inspired by the example of the Rafael Theater in Marin, which often screens quirky films almost impossible to find anywhere else, they aren’t sure whether the Lakeside can afford to be quite so adventurous.

“It’s hard to say,” Boyd says. “I can’t tell you, ‘This is what Santa Rosans want to see.’ We have to experiment, see what works and what doesn’t.”

But some local observers wonder if even a modest attempt to emulate the Rafael can be successful in Sonoma County.

“I don’t know if that sort of thing is really commercially viable,” says Eleanor Nichols, director of the Sonoma Film Institute. “We have a hard enough time at SFI filling up the room that we have with art programming. But I certainly hope it works out. The more choices people have, the more opportunities they’re going to take to see different kinds of film.”

Price and Boyd seem eager to challenge such notions about local filmgoers. Among the eclectic possibilities for the future, the partners say, is that the theater will play host to traveling film festivals, perhaps screening a “best of” package from the Mill Valley Film Festival.

That may have to wait, however, until the Lakeside gets the equipment to run 16mm film and video projection–two formats that film festivals often require.

“There are a lot of things that we want to do,” Boyd says. “It’s a matter of making them all happen. The first six months, it’s basically getting all the pieces assembled. It’s not like you go, ‘Boom, instant theater.’ It’s going to take a little time. But we’re here for the long haul.”