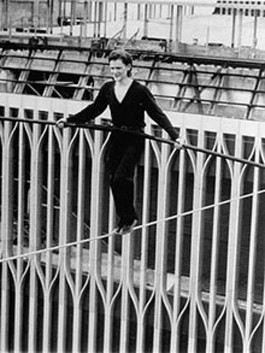 In a summer movie lineup crowded with comic-book heroes and larger-than-life action sequences, an unassuming documentary turns the spotlight on a real-world superhero. Most people have probably never heard of Philippe Petit, but he can dance on air—without any special effects.

Man on Wire, the latest release from documentary filmmaker James Marsh (The King, The Team), is not a formulaic superhero movie. It’s better. Marsh, who has said he sees the film as a heist movie, directs the story with all the suspense and wit of a film noir murder mystery and all the adrenaline of a blood-pumping bank-robbery flick. And the best part of all is that Petit is more than real—thriving, actually, now into his 60s—and every moment of the story is made more incredible for it.

On Aug. 7, 1974, Petit, an energetic and daydreaming Frenchman, set out to do the impossible. With the help of a small group of friends, he smuggled equipment and cables into the newly erected World Trade Center, secured the cable across the 200 feet between the towers and proceeded to walk back and forth for the better part of an hour.

Petit, his face lost in memories, tells the camera that he had been dreaming of the towers for six years, watching them grow from across the ocean and idly doodling a wire across the tops of them in pictures. The towers were being built for him, he says. When the time came, Petit infused a giddy desperation into his entire life, devoting everything to his final moment of performance. Of course, Petit was promptly arrested after coming down off of the wire, and the camera watches as reporters whip themselves into a frenzy trying to discover why Petit risked his life for such a stunt. “There is no why,” he says simply. In context, it makes complete sense.

The film entirely captures the soul of the man behind the “artistic crime of the century”; his quirks, his passion for the art of wire walking, his joie de vivre are all communicated through Petit’s excited, undeniably charming narration. Miraculously, a friend had the good sense to film and record nearly every stage of the crazy operation, and these surprisingly articulate home movies make up the bulk of the film. Marsh substitutes missing moments by recreating them in black-and-white, which thankfully does not interrupt the flow of the narrative in the slightest. That spine-tingling something about defying both physical and mental laws is exhilarating to watch and mesmerizing to imagine, but the actual images and footage of Petit lying down calmly along a thin cable 1,350 feet above Lower Manhattan, a goofy smile plastered on his face, is simply breathtaking.

Seeing the birth and construction of the World Trade Center is more than a little chilling. A stunt like Petit’s could only have occurred at the time it did—security issues and terrorism paranoia prevent any such thing happening again—and a hazy sort of sad nostalgia is vaguely present throughout the film. “I figured I was watching something that nobody else would ever see again in the world,” says a wide-eyed young cop who was sent to retrieve Petit from the roof, in a clip from the 1974 nightly news. “Thought it was once in a lifetime.”

Petit did not fall, nor did he die, but the amount of tears shed in the film is staggering. The sheer beauty of the stunt, the risk and the drive to accomplish a dream loosens the tear ducts unexpectedly for many of Petit’s friends, who helped him endlessly to his destiny and fame. But Petit’s eyes stay dry, glittering instead with childlike joy as he recounts every second and emotion of the operation. “Life should be lived on the edge,” he says emphatically, punctuating the point with his hands. “See every day as a true challenge, and then you live your life on the tightrope.”