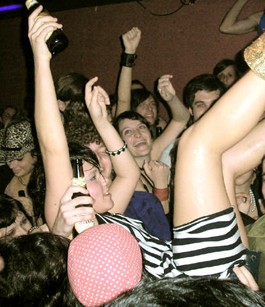 It’s a cruel summer for the girls, sad to say. Katy Perry tries to make us all believe that kissing another girl is, like, the most shocking thing in the universe, and Duffy tries to make us think that Mary Wells never existed, and Rihanna tries to convince us that her jam this year is as sweet as last year’s “Umbrella.” Where are the breezy, thoughtless tunes that can flood the car and whisk your mind away?

Well, down in Brazil, it turns out. CSS, a mostly female five-piece from São Paulo, have just released their sophomore album Donkey, and it’s the perfect thing to throw on at pool parties and backyard barbecues during the waning days of an Indian summer. Mindless, kinda dumb, very repetitive and totally enjoyable, it’s the best pop music that the United States wasn’t able to cough up this year, and it’s what you’ll want to furtively sneak into your niece’s music collection to give her some actual hope for that old idea of girl power.

Sophisticated and juvenile at the same time, “Left Behind” is an ultimate kiss-off single, if only because it makes ditching a jerky boyfriend sound like a ton of fun. “I’m gonna jump onto the table and dance my ass off ’til I die / And then I’ll hopefully forget you,” sings lead singer Lovefoxxx. Throbbing synth sounds burble beneath dueling guitar lines and slick production, and how can you resist?

Staunch fans of the band’s 2005 debut album, Cansei de Ser Sexy, will find Donkey nowhere near the raw and subversive cattiness of older songs like “Meeting Paris Hilton” or “Art Bitch.” CSS’ new major-label home on Warner Brothers has brought along the usual production tricks; the album’s unnecessarily slick and processed, and the fuzzy Polaroids that make up the inside booklet can’t make up for the band’s lost innocence. But these feelings last for only a little while, and beneath the album’s sheen is the same great band, kinda like the difference between Beauty and the Beat vs. Vacation.

Donkey is in stores now. CSS perform, in all their neon spandex stage-diving glory, at the Treasure Island Music festival in San Francisco on Sept. 20&–21.