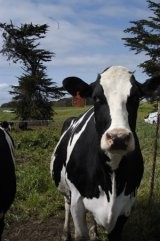 by Gretchen Giles
Apr 28, 2010
This is very cool news for those who oppose Monsanto’s slow—but heavily patented—usurption of the natural world. A press release actually says it best:

Straus Family Creamery is the nation’s first creamery to achieve Non-GMO Verification for all its products and will carry the “Non-GMO Project Verified” Seal on all of its packaging.

The Non-GMO Project is a non-profit collaboration of food producers, retailers and agricultural suppliers united in the belief that consumers deserve to make informed choices about products with genetically modified ingredients.“The Non-GMO seal emphasizes our commitment to being stewards of sustainability,” says Albert Straus, President of Straus Family Creamery. “Our consumers rely on us to provide a clear alternative to industrially produced dairy products.”

According to the Non-GMO Project (www.nongmoproject.org), GMOs have been in widespread use for nearly a decade, with steadily increasing risk of contamination to seeds, crops, ingredients and products. There is currently no standardized set of best practices in use to identify and stop contamination.

On April 27, 2010, the U.S. Supreme Court will hear the case of Monsanto v. Geertson Seed Farms – the first time the issue of genetically engineered (GE) crops has reached the nation’s highest court. The court’s decision will have broad implications for U.S. producers, consumers and the organic food industry. Straus Family Creamery has joined the case as a friend of the court to support the cause.

In 2006, the Department of Agriculture (USDA) approved Monsanto’s genetically engineered (GE) Roundup Ready alfalfa. They were subsequently sued by the Center for Food Safety (CFS) in federal court on the grounds that the approval was premature without a proper analysis of the potential effects the crop may have on the ecosystem. The court ruled in favor of the CFS and banned GE alfalfa until the USDA had fully analyzed the impacts of the plant on the environment, farmers, and the public in a rigorous analysis known as an environmental impact statement (EIS). Monsanto has repeatedly appealed this decision, and CFS has successfully defended it. Monsanto’s most recent appeal will be heard in the U.S. Supreme Court.

Straus has been an outspoken advocate to protect the integrity of the organic standards by ensuring that GMOs stay out of organic food. “The release of genetically engineered alfalfa will be devastating to the organic dairy industry,” says Straus. Historically, in many cases, contamination of organic crops by genetically engineered ones has caused widespread collapse of organic or non-GE markets in the United States and abroad. “The organic dairy industry is growing and right now small organic family farms are able to sustain themselves,” notes Straus. “The continued viability of this industry depends on the availability of certified organic alfalfa hay.”

Straus Family Creamery consistently provides the highest quality, best-tasting, organic milk, yogurt, butter, and ice cream, all made with minimal processing and wholesome ingredients. Straus Family Creamery bases its business decisions on environmental and ecological considerations, which support the philosophy of sustainable, organic family farming, for the health and well being of the company, its producers, employees and the community.