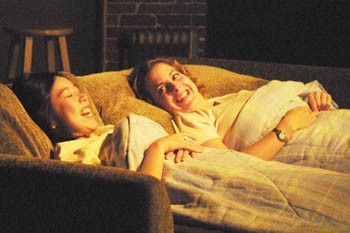 Lesbian love story gets uneven treatment at AT

IT SEEMS like nothing: a mild collision between two sets of lips. But it can mean everything–the first step on the road to passion, love, maybe heartbreak. We’re not supposed to kiss and tell, but given the repercussions of the act, who listens to such advice?

Locking lips is even more complicated than usual for the two women at the heart of Stop Kiss, now on stage in an Actors Theatre production directed by Celeste Thomas.

First, of course, Jill and Emily have to take homophobia into account–both the disapproving-friends-and-family variety and the gay-basher-in-the-street kind. But while Stop Kiss, an Obie Award-winning drama from Los Angeles playwright Diana Son, comes to grips with homophobia, it is more deeply concerned with a complicated transition from friendship to something more.

Sara, played by Emily Chang, is an idealistic teacher who arrives in New York City to take a job in a public school in the Bronx. Looking for someone to watch her cat, she hooks up with Callie, a cynical traffic reporter played by Jill Wehrer.

Brought together by chance, the two women hit it off immediately. They start talking about their jobs, parents, and disappointing love lives (both recently parted from boyfriends). By the time the two women whip out the magic Eight Ball for a little fortunetelling, you know they’re fast friends.

Sara starts bringing a bottle of wine with her to Callie’s messy apartment, which gets cleaner and cleaner with every trip. When Sara tells Callie, “I’ll go see what’s in your closet,” you get the feeling she’s talking about more than clothes. And when the two have the kind of nasty first fight every couple experiences, you know romance is on the way.

Unfortunately, AT’s production of Son’s play is marred by a disconcerting lack of chemistry between the two leads. On opening weekend, Chang and Wehrer were missing cues, fumbling Son’s deftly crafted dialogue, and generally failing to convey much mutual attraction. We’re supposed to feel a powerful magnetism; instead, we mainly get dutiful chumminess.

Strangely enough, both women improve when someone else is onstage–whether it’s a friend, an old lover, or even the extremely unconvincing police detective played by David Cole.

That improvement is especially dramatic with Wehrer, who displays excellent comic timing and delivery in some very funny scenes with George, a clueless old friend played by the hilarious Brian Bartlett.

The first kiss between Sara and Callie is the fulcrum upon which the nonlinear narrative turns. Alternating scenes tell the story of before and after–the events leading up to the encounter and the unexpected results of a little necking in a public park.

Along the way, a dominate theme emerges, though the playwright doesn’t beat you over the head with it. Before and after their kiss, the women feel the competing pulls of friends, family, and lovers. Callie feels Sara’s parents looking at her “like I’m a dirty old man.”

But this tug of war is about much more than gay vs. straight. It’s about the militant assumptions people make and the rigid boundaries they demand. Be gay or straight, be friends or lovers–but don’t try to be both.

It’s a tribute to the power of Son’s play that her message about the profound damage caused by such attitudes comes through loud and clear–even in this uneven AT production.