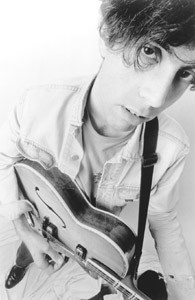 Chris von Sneidern wants to be a ‘Rock Star’

FAME. David Bowie turned it into a song. Captain Hook called it an “insignificant bauble” just before leaping overboard into the jaws of the crocodile in Peter Pan. And in Rock Star, Mark Wahlberg has it handed to him on a platter–and finds it isn’t what he expected.

So what about Chris von Sneidern? Is underground acclaim enough to content the technically successful, but largely unknown, San Francisco pop-rocker (affectionately known as CvS) behind such underground hit CDs as Wood + Wire?

“Oh, I’m still pursuing [fame], in my own way,” von Sneidern admits. “But the further along I go, the further away it seems. The deeper in I go, the more I realize how far away it is.”

Though not exactly a household name, von Sneidern has a reputation that’s strong in the music world, both as a producer (John Wesley Harding’s New Deal and Awake) and a session player. He played with the Sneetches in the ’80s and Paul Collins’ Beat in the ’90s.

For the last hour, the two of us have been having a conversation that’s traveled all over the map. We’ve touched on such subjects as the easily crushed feelings of struggling musicians, the enduring pleasures of Spinal Tap, and the curious fact that, in most rock-and-roll movies, the only guy with any intelligence is the road manager.

Our talk started, a dozen tangents ago, with Rock Star, the new Mark Wahlberg movie about a wannabe metal god who works as an office-supply salesman before he’s recruited to front his favorite big-hair rock band. Co-starring Jennifer Aniston and Timothy Spall (as the wise road manager), the film’s a drug- and sex-fueled fable about a regular guy whose dreams come true. . . for a while.

“People love films like this,” CvS suggests, “because we all want to be rock stars, and this movie says it’s possible. But it also reinforces the idea that we don’t really need to be a rock star, because being a rock star, in the end, is really just a bunch of shit.”

So what really makes people want to be rock stars? CvS recalls discussing that very topic recently with a former child actor.

“We were sitting by the pool in L.A. drinking beers, and he said, ‘Being a performer is the best way to receive love and not have to give it back,'” CvS recalls. “So if you can’t give love, or you’re too afraid to commit to giving love–but you want to be loved–becoming a performer is the way to go, because there’s a moat between you and the audience.

“You do your thing, and they sit out there and give you love and affection and applause,” he continues. “And you get to go back to the green-room and drink your booze.”

“Yeah, but that’s life,” CvS says. “That’s why people want to be rock stars. It’s a charge, especially at the level of the guys in this movie–it’s a big, big charge. But, at the end of the day, all you really get is pussy and booze and first-class tickets.

“We all know that’s not anything but a holiday.”