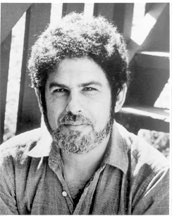 Logos: Poet and translator Stephen Mitchell has given us vibrant readings of Rilke, Zen, and God.

Poet Stephen Mitchell translated Genesis, and it was good

TO LOOK at Stephen Mitchell, you’d never guess that the man is at the end of the second leg of a national tour, gave seven interviews yesterday before flying home, and was fortunate to obtain a whopping four hours of sleep this morning after enduring the de rigueur layover-from-hell in the Las Vegas airport with its one-armed bandits and clinking silver. His eyes are clear and his face almost completely unlined. “Have you ever been there?” he asks with mock horror about the Las Vegas airport. “What?–people can’t wait to gamble until they hit the casinos?” He shakes his head, taking a sip from his soda as we sit in the waning warmth of a Sonoma garden cafe. “OK,” he smiles, sitting back, “let’s start.”

And start we shall, in the beginning, right after I run out and sign myself up at the local Zen monastery. Because it is his 30-odd years of Zen practice that have stood Mitchell in such good stead, kept the lines from his face, and made him so completely relaxed and genial about spending yet another hour with a stranger, away from his family, answering questions for the umpteenth time about Genesis, one of the oldest and best-known books in the world.

One of the pre-eminent translators and poets of our time, Mitchell, 53, has translated works as diverse as the Tao Te Ching, The Selected Poetry of Rainer Maria Rilke, The Gospel According to Jesus, and The Book of Job. Just out and causing all of this traveling trouble is his rendering from the Hebrew of Genesis: A New Translation of the Classic Biblical Stories, inspired by PBS journalist Bill Moyers as an adjunct to his new television series on the ancient book, traditionally ascribed to Moses.

Written in supple, modern English, Mitchell’s Genesis reads as close to the original spoken Hebrew as he could mold it, making these most familiar stories of the Western world as accessible as they’ve ever been. In fact, this is such a modern edition that it’s even dedicated to television producer Norman Lear. Of all people.

“Norman Lear called me up one day out of the blue in 1988 because he had been given [an audio] copy of the Tao Te Ching,” Mitchell says with a twinkle. “He told me that it had changed his life, and that he woke up every morning listening to the tape and went to bed every night listening to the tape and that he had it in the car. That’s a wonderful friendship for which I’m enormously grateful, and which has led to meeting a number of other wonderful people, including Bill Moyers. So, in a sense, Norman’s responsible for the book.”

When Moyers approached Mitchell about appearing on his program to discuss the relevance of the Genesis stories in modern-day life, Mitchell wavered. “I couldn’t say yes, sure, immediately, because I didn’t know immediately if I had the kind of affinity for it that I needed to have in order to become involved,” he remembers. “If [Moyers] had said, ‘I need a program on the Tao Te Ching,’ I would have said OK immediately. But Genesis is a much more uneven book, and I didn’t know if I had inner permission for that. That was why I told him that I needed three days to muse about it.

“As I said in the introduction [to Genesis], after I found that I did have a deep connection with a few powerful places in the book, I felt that I could go ahead. The necessity to translate it, which came up a few days later, was really a question of doing my homework with enough fairness that I could say yes totally, and for me, it was really a question of intimacy. For me, a way of deepening intimacy with anything that I’m attracted to is to translate it. So it was a good decision.”

This search for intimacy has long been the driving engine of desire behind Mitchell’s work. Drawn to the book of Job after his first important love affair failed while he was a graduate student in the Comparative Literature Department at Yale, Mitchell immersed himself in a study of Hebrew in order to more fully own the text. Fluent in only one language at the start, Mitchell now reads eight, knowing as a child only as much Hebrew as “every reformed Jewish kid does, which is practically nothing,” he smiles.

When the work of Rainer Maria Rilke called out to him, Mitchell absorbed German thirstily. Years of study led him to a self-imposed academic and intellectual exile while he followed the path of Zen Buddhism, taught by the master Seung Sahn. This search resulted in his first book, Dropping Ashes on the Buddha.

Groomed to take over Sahn’s work, Mitchell opted instead to return to the world of literature, and biblical literature, at least, has never been the same, benefiting from the sensible, sensual cast of Mitchell’s English tongue.

As much poet as linguist, Mitchell is a highly acclaimed practitioner of the tricky art of translation, where tone and clarity, nuance and colloquialisms, meter and rhythm, all have to be tipped carefully from one language to the next, like mercury from a jar.

“It’s a question of a deep sympathy,” he says. “It’s like meeting somebody and falling in love and knowing somebody completely even though you may not know anything about her life and the cares of it. You look at this person and there’s this deep connection there, that’s already there from the beginning. Both of you know it. It can be deepened, the intimacy can be deepened and refined, but what was already there in the beginning is constant. It’s kind of like that.

“Knowing another consciousness from the beginning and being able to enter and to see from the middle of that consciousness, and then the process of living with that poem or that book is just a question of deepening it, but it’s already there,” he continues. “I’ve gone through in my work a series of falling in love with people. It’s really like that–that’s a very close analogy.

“And once that intimate connection exists, I don’t have to make decisions, I don’t have to figure it out or intellectually walk any kind of line, it’s really more a matter of listening deeply and the way I’ve said it here,” he says, patting the Genesis edition on the table before him, “is hearing into existence an English that would have that same kind of music. And it’s more crucial preserving the music than the content, though the content is certainly important. I think that that kind of deep sympathy is what’s important.”

Stating that the Genesis stories “are mostly about conflict and darkness,” Mitchell avers that most people “live in pain and conflict,” making the stories appealing in a magnetically awful way to our own worst selves.

However, the stories are “bookended in joy,” he affirms, beginning with the simple, joyous act of creation itself, and ending in the complexity of the forgiveness and trials in the Joseph story. “All of the darkness and conflict of the main part of the book is bounded out in joy, and that gives it a very peculiar and touching tone, for me. But I’ve had so many people on this tour, for instance, say that it feels to them that the Genesis stories are accessible precisely because the characters are so messed up,” he grimaces.

But from the massed firmament does come beauty, and Mitchell isn’t done with Genesis yet. A book of poems, titled In the Beginning, is among the books this prolific writer is preparing for publication within the next two years. “Those are my personal interpretations of many of the great stories that I felt were too personal to include in this book,” he says, pointing to the volume near him, “because this is really a book of Genesis as seen by me but for people who aren’t interested in how the stories feel when I take them in and retell them through my own experience.

“So, it’s a great joy to be working on those, and I feel that it’s a great completion of my work on Genesis, because for me, this didn’t go far enough in a certain way.”

Our time coming to an end, Mitchell politely rubs his eyes. “I am amazed that I am still conscious,” he laughs.

I, however, am in no way amazed.

From the September 26-October 2, 1996 issue of the Sonoma Independent