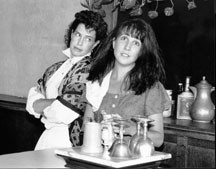 ‘Parallel Lives’ and ‘Playboy of the Western World’ take bows

THE FALL THEATER season is in full crackle, with both Parallel Lives at Actors’ Theater and Playboy of the Western World at Main Street Theatre opening last weekend.

It was frighteningly familiar to me, having a tin ear from way back, to sit uncomprehendingly through the first long minutes of Main Street Theatre’s excellent production of Playboy of the Western World. Sporting thick brogues as bushed as spring heather, the cast burred and rolled it through most of the first act until the silent click finally came through, and wonderfully, miraculously, I could understand the fun of this patricidal Irish comedy.

Penned by J. M. Synge at the turn of the century, this is a fresh, silly tale of Christy (Matt Sutherland), a foolish young man who gains strange, admiring notoriety for bashing his father over the head with a shovel and leaving him for dead. He’s particularly appealing to the ladies, especially the Widow Quin (Priscilla Sanford), who comes by her bereavement the honest way: she killed ‘im. Sighing in a romantic aside, “There’s great temptation in a man who’d destroy his Da,” Quin sets a lusty, straightforward mark on poor Christy–poor, because frankly, you come to feel for the simple lad as the women gyrate avariciously around him. Also vying for Christy’s hand is Pegeen Mike (Jennifer King), a barmaid with a drunken Da she’d just as soon see dead, and an ineffectual lover (Anthony Martinez), an eejit who couldn’t bash anyone on the head if his life depended on it. Added to this down-home courting–Sanborn fills the phrase “shearing sheep” with a deadly sexuality–is a Da who won’t quite stay dead (Scott Phillips, of course), and who is able to recognize his son solely by his style of spitting, making Playboy as raucous a farce as any by Feydeau.

MST director Jim dePriest makes his usual sure way through the material, staging for highest comic effect and coaxing the best from his performers. While the cast is uniformly excellent, of particular note are Sanborn’s lust-queen, King’s pursed-mouth sweet shrew, and Matt Sutherland’s Candide of a Christy (though someone should tell him that literally picking his feet is an ugly bit of stage business).

CREATED BY those feminist pranksters Mo Gaffney and Kathy Najimy, progenitors of The Kathy and Mo Show, Parallel Lives is an ambitious ensemble piece that gives a lazy slap to most everything one holds dear. Positing the pleasantly freakish notion that the caprices of the world are controlled by two Ping-Pong-playing deities who casually decide to gift men with huge egos and women with that childbirth thing, Parallel Lives is composed of a series of vignettes featuring four solid, comedic, and affecting actresses: Deborah Luce, Julie Schellin, Janice Ray, and Jennifer Weil.

In a dizzying 14 scenes, this quartet of actresses roll up their sleeves and wade into the material, tackling just about every small issue in modern female life. Often quite funny, Parallel Lives has some wonderful ideas about feminism itself, not shying away from satirizing the deadly serious hear-me-roar aspect of the movement, as in the “Las Hermanas” scene set in a lesbian bar. And then there are those terrific strap-on breasts worn by Lady Ann (Luce) and Lady Anne (Weil) in the “Shakespeare” scene, the agony of an airhead date (who eventually triumphs by ruling Bosnia), and the mute frenzy of “Silent Torture,” in which the cast desperately mimes the morning dressing ritual of hose and horrors.

But funny can’t last forever, and Parallel Lives is simply too long by at least a third. With as many scenes, thoughts, spoofs, and beauty bits as are being offered to the audience, there is a dogged length to the material. Writers Gaffney and Najimy hang deathlessly onto their scenes, and director Brenda Starr can’t quite close her eyes and clip. Which is exactly what needs to be done in deference to the fine actresses she’s got spinning out on the stage, dismayed to find that they are losing audience interest as vignettes stretch well beyond 15 minutes, while sentiments that began funny get mawkish, and we are certainly all more than aware of the point by the scene’s end. Additionally–and please don’t write–making mean fun of men stopped being funny ’round about 1987. Now it’s just mean.

Parallel Lives has the cast, the performances, and the ideas. With a slight trim and tuck, it would provide a full belly of fun.