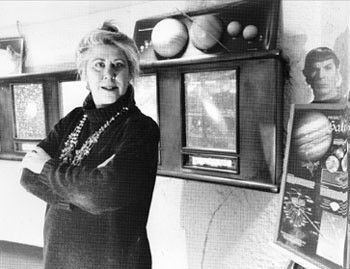 Local therapist boldly goes where ‘Star Trek’ has gone before

ROSS PEROT PROMISED that, if elected, he would fix the economy “at warp speed.” Gene Roddenberry’s cremated ashes orbited on a real space shuttle. Inner-city crack addicts ritualistically mumble “Beam me up, Scotty” before taking a hit on the pipe.

These are only a few indications that, 30 years, four series, eight movies, countless novels, comic books, action figures, conventions, and other tie-ins after its origin, the one-time cult phenomenon known as Star Trek has made a huge impact on global popular culture. So, given the potent chords the show strikes in the American Zeitgeist, could Star Trek provide a fruitful launching point for serious discussions about love, life, and other universal human concerns?

The idea of using Star Trek as grist for analyzing serious themes might be self-evident to any enthusiast (and according to one poll, 50 percent of the American population identify themselves as Star Trek fans), but it took Santa Rosa therapist Meg Pierce, MFCC, to turn the concept into a monthly lecture/discussion series. “I’ve had the idea in my mind for a long time, and the response so far has been very encouraging,” says Pierce, a statuesque woman whose outward appearance belies any pointy-eared, geeky Trekkie stereotypes one might harbor.

But Pierce’s pleasant exterior conceals a mind brimming with a great enthusiasm for and encyclopedic knowledge of things Trek, as I discover when we quickly digress into a discussion of our shared favorite hour of Trek. Entitled “Darmok,” this Star Trek: The Next Generation episode finds Picard encountering a race of benevolent aliens who communicate entirely through elaborate, colorful metaphors–which could in itself be viewed as a metaphor for Pierce’s lectures.

With monthly attendance including a dozen or so souls, Pierce soon plans on offering the discussion series in San Francisco as well. “It came from me asking myself why,” she says. “Why have I and so many other people been watching this for 30 years?”

As Pierce discovered, what makes Star Trek so rich with discussion possibilities are the number of ideological and analytic lenses through which one can examine the show. There’s the political angle, which sees the evolution of Star Trek in its various incarnations as charting the development of modern liberalism, from the Kennedyesque swaggering of Captain Kirk to the introspective, multi-culti cultural relativism of the latter-day Next Generation, Deep Space Nine, and Voyager. Then there are the analysts who view the different Star Trek series as illustrations of workplace environments, as reflected by the widely varying leadership styles of Captains Kirk, Picard, Sisko, and Janeway. (Hint: Never wear a red shirt and beam down to a planet with William Shatner–minor characters suited red, are, to rhyme simply, marked dead.)

Pierce’s own enthusiasm for Star Trek isn’t widely shared in the therapist community–“though there are a few of us”–but she still finds the show to be a useful tool for communicating with patients in the language of symbols. “I look at the show through my orientation as a depth therapist, so the Jungian model is the closest for me,” she says.

Pierce also finds rich metaphorical potential in the Next Generation characters. Using as its starting point the characters of Enterprise security chief Worf and Guinan–Whoopi Goldberg’s 400-year old sage/bartender (imagine Yoda with braids)–Pierce found herself Jung again. “Worf, of course, is the warrior archetype, the conflicts of which have been explored several times in different episodes,” she explains. “And Guinan, of course, is a wonderful representation of the wise old woman character.”

Other upcoming lecture and discussion topics include the rich metaphoric realms of sex, love, and dreams–though Pierce will have to search hard for the sex part. Despite Captain Kirk’s predilection for bedding an alien babe-of-the-week in each episode, The Next Generation is notoriously prudish about passions of the flesh, with Captain Picard getting lucky a mere two times over the course of the series’ seven-year run.

And then there’s the symbolic significance of the Borg, the frightening race of hive-minded cybernetic villains whose abduction of Captain Picard resonated with themes of bodily violation. “With the new movie out, that one should be an especially interesting,” says Pierce, anticipating the impending release of (slated for Friday, Nov. 22), which promises to bring the Borg back for another round of combat with the Enterprise crew.

And despite the somewhat highfalutin intellectual level of her monologues, which might send Mr. Spock scrambling for his thesaurus, Pierce’s hopes for the lectures are a bit more, well, down to earth. “I just want people to have fun,” she says. “I think it’s enjoyable to get a group of people together to talk about things that interest them.”