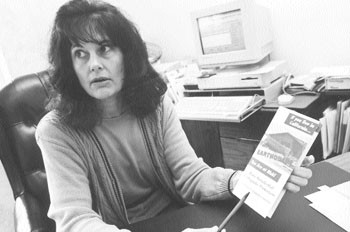 Shaky Ground: While consumer groups are less than enthusiastic about the state’s earthquake insurance fund, insurance agent Dayna Sibert of Healdsburg says that as a stopgap measure, it works.

Californians who scramble for earthquake insurance are in for a surprise

THIS YEAR has been an extremely excruciating time for virtually everyone involved with homeowners’ insurance,” says Lee Lewis, the self-described “answer man” for the Insurance Brokers and Agents West, an industry trade association based in Sacramento. “Virtually everyone–I mean the insurance-buying public, the insurance brokers and agencies, regulators, legislators, the insurance companies–has had a problem with this thing.”

That “thing” is earthquake insurance, a commodity that has become scarce throughout California in the wake of the disastrous 1994 Northridge temblor, when the economic foundation of the insurance business was wrecked as thoroughly as an apartment complex at the quake’s epicenter. Millions of dollars in claims quickly depleted the resources of the companies that provided earthquake coverage to San Fernando Valley property owners, and the insurers quickly pulled back to avoid further exposure to that kind of risk.

A recent survey of insurance agents and brokers in California “indicated that 99.8 percent of the marketplace either would not issue any new business at all or would issue it only on a restricted basis,” reports Lewis, who notes that is an increase from 89 percent in another survey at the beginning of the year. “It’s been extremely tight.”

“The price of regular homeowner insurance premiums has doubled in the last 18 months,” concurs Ken Willis, president of the League of California Homeowners, while earthquake coverage has shot up even more. Consequently, “the percentage of California homeowners who carry earthquake policies has dropped from only 25 percent of the state prior to Northridge to less than 10 percent today.

“Most people simply cannot afford it.”

To address this situation, the state Legislature last year created the California Earthquake Authority, a $10.5 billion state-run fund to guarantee limited quake coverage for those who want it. That program is due to begin full operation in mid-December.

“Consumers will probably not see much difference” under the new agency, says state Insurance Commissioner Chuck Quackenbush, who masterminded the fund’s creation. Homeowners will continue to deal with their own insurance agents, who will begin offering a standardized earthquake policy underwritten by the CEA. Those same agents will handle any claims that arise, “but the [settlement] check will be cut by the California Earthquake Authority,” Quackenbush says.

The innovative CEA has been widely praised by the insurance industry, although it has been accepted with somewhat less enthusiasm by consumer groups. “I think that as a stopgap measure, it was the only choice that California had,” says Dayna Sibert, owner of Sibert Insurance Services in Healdsburg. Without it, “there was going to be absolutely no homeowners [earthquake] insurance left.”

Under CEA, earthquake coverage will become standardized, Sibert says. “They’re going to have a basic policy to cover the primary living structure: $1,500 for additional living expenses [during repairs] and $5,000 for contents. It will be the same policy offered to everybody. There won’t be any changes that will be available. All of the companies have already gone to this particular policy.”

That basic policy also comes with a uniform 15 percent deductible, and in a particularly troublesome bit of language for rural areas such as Sonoma County, coverage is restricted to the primary residence only. “All other structures” are specifically excluded.

“I don’t think they were using their heads” when that provision was drafted, says Jack Rosetti, a Farmers Insurance agent in Santa Rosa. “What they were trying to eliminate were some of the small frivolous claims in the Los Angeles area, where we were replacing decks and hot tubs and gazebos. I think they could have clarified the difference between a second dwelling and ‘all other structures.'”

That seemingly simple omission could “wipe out an entire class of businesses,” worries Rebecca Smith, owner of the Farmhouse Inn, a Forestville bed and breakfast. “How many people do you have running a business out of their home? Many vintners live on the winery property, she notes, and B&B owners do so by definition.

“I don’t think the people drafting the legislation think a lot about people who don’t drive to work every day and who operate a myriad of businesses out of their homes,” she continues. “I think that needs to be looked at.”

For those who want quake coverage for detached offices, studios, granny units, barns, or other secondary buildings on a residential property, options are limited. “There might be a few small companies that will continue to offer earthquake insurance on their own,” says Rosetti, “but I don’t anticipate their premiums to be any better, and you’re with a small company,” rather than with a large organization able to raise matching resources to pay claims.

Premium rates for CEA coverage will range from $2.75 to $5.75 per $1,000 of assessed value, with rates set by zip code areas. The statewide average is expected to be $3.29, according to Richard Weibe, a spokesman for the state Department of Insurance, but Sonoma County’s rates will be “pretty close to the top.”

As for the limits of the CEA policy, “Obviously there are people who are not going to be satisfied with $5,000 coverage for contents,” Weibe says. “We think the private market will make coverage available to supplement the basic coverage offered through CEA.”

One company trying to fill that niche is F+G Specialty Insurance Services of San Francisco, whose president, Rich Campagna, says they have sold 8,000 quake policies statewide since setting up shop early this year. “We’ll be competing with CEA,” Campagna says. “I think some people are going to be surprised when there is a big event. The cost of replacing contents and the cost of living expenses will far exceed what that [CEA] policy offers.”

However, Campagna’s company carefully screens the homes it insures on the basis of age and location, making sure its business is geographically diversified. “We won’t offer this to everyone in the state, which [CEA] will,” he notes.

“CEA is an imperfect thing,” concludes Lee Lewis. “The real solution, we believe, lies in national legislation” to create a Natural Disaster Protection Act, “something similar to what CEA would do but on a national basis.” While such a bill has been proposed in each of the last several sessions of Congress, it has yet to win broad nationwide support.