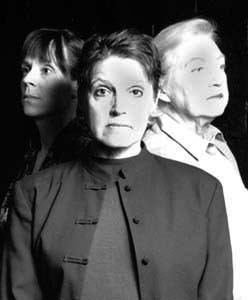 WITHOUT an audience there is no theater,” renowned director Viola Spolin once remarked. “They are our guests, our evaluators, and the last spoke in the wheel which can then begin to roll. They make the performance meaningful.”

Audiences also make a performance profitable, which has increasing significance as local theater companies embark on their fall seasons. Many have found themselves walking the razor’s edge that divides artistic integrity and commercial viability.

Will achieving balance leave these companies neutered or noteworthy?

“We still have to get butts on the seats, as they say,” explains Jim DePriest, artistic director of the sister Sonoma County Repertory and Main Street theaters. “But we also have to challenge our audiences, actors, and directors or we’ll die on the vine.”

Main Street has already begun mounting Othello in Sebastopol as part of its annual Shakespeare in the Park series, and the theater will stage Charles Dickens’ A Christmas Carol in the dogleg between Thanksgiving and Christmas. Molière’s Tartuffe will usher in the companies’ new year, while Tennessee Williams’ signature work, A Streetcar Named Desire, looms in spring.

Likewise, Santa Rosa Players will follow their fall season’s spate of box office-friendly family fare (Neil Simon’s proven comedy Biloxi Blues book-ended by musical chestnuts Peter Pan and West Side Story) with a musical version of Kiss of the Spiderwoman (an evocative depiction of an imprisoned gay cinemaphile becoming embroiled in the political and amorous intrigues of his cellmate).

“We wanted to reach, we wanted to do something different. We’re using this production as a kind of barometer,” says Players manager Gene Abravaya. “People are always saying, ‘Oh, the Players are always doing such old, run-of-the-mill things.’ Now we’re giving the people the opportunity to see something really contemporary. Let’s see if they come.”

Actors’ Theatre confidently expresses the philosophy that fine art will attract brisk commerce: “We assume that any production that will be aesthetically excellent will be commercially viable as well,” says Sheri Lee Miller, AT’s director of public relations, then wryly adds, “Naïve, perhaps, but that’s how we do it.”

Highlights of AT’s 10th season include the Sept. 18 opening of Kindertransport–a rigorous, emotional portrait of a Jewish girl who, along with 10,000 other children, was rescued from Nazi Germany and placed in English foster homes. To commemorate the 60th anniversary of the Kindertransport, the theater hosts a panel discussion Sept. 24 about the little-known mission that will feature four survivors. November will see the opening of the hit comedy Medea, the Musical, directed by its author, John Fisher. (After its Santa Rosa staging, the production moves straight to New York.) The acclaimed Fisher will also begin instructing playwriting classes in late September. Finally, AT also offers staged readings from its New Plays Festival, interspersed throughout the season.

Petaluma’s Cinnabar Theater celebrates its 25 anniversary with the opening of Christopher Fry’s The Lady’s Not for Burning, featuring a champagne and dessert reception on Sept. 25. In late October, the theater transforms into an “Interactive Halloween Scare House,” followed by theatrical dynamo Lucas McClure’s Eclectic Theater Festival in November. Gian-Carlo Menotti’s holiday opera, Amahl and the Night Visitors, pilots the theater’s Christmas programming, and satirist songwriter Tom Lehrer’s send-ups of contemporary culture cap the year with the return of the musical revue Tom Foolery.

Sonoma State University opens the fall season with the arrival of noted theater critic and playwright Eric Bentley (consult your play anthologies–he’s edited most of them). Bentley will lecture on Bertolt Brecht and perform selections of the playwright’s work on Sept. 29.

“We really are a working theater. This year at Sonoma State we’re introducing a completely revamped theater curriculum which is much more intensive,” says Jeff Langley, chair of Performing Arts. “To some extent we’re trying to model our productions after the curriculum itself. It’s going to change the way we do everything around here. It will be a major shift from what we’ve done in the past… . The performance aspect of our curriculum is being stressed more and more.”

OTHER SSU HIGHLIGHTS include a student production of Thornton Wilder’s The Skin of Our Teeth and the Engelbert Humper-dinck opera Hänsel and Gretel. SSU closes the year with Celebrate the Solstice— tableaus and vignettes created and performed by faculty and students.

The Santa Rosa Junior College Theater Department opens its fall season Oct. 9 with Roosters, Milcha Sanchez-Scott’s explosive drama about a Latino family in the rural Southwest. Then it’s on to Christmas in November as SRJC stages a musical production of Miracle on 34th Street.

Meanwhile, Russian River-based Michael Tahbib’s fledgling Pegasus Productions waits in the wings after its recent production of Taming of the Shrew. The company is on hiatus while establishing permanent digs.

“Because of the move, we’ve basically had to defer our production until next year,” says Tahbib, who intends to “introduce the public to more ancient and modern classic works as well as present new points of view on older classics where that’s needed.”

So, will the new season find theaters packing the seats or falling instead upon the sharp sword of public indifference? There are no foreseeable close calls, but let the high-wire act begin.