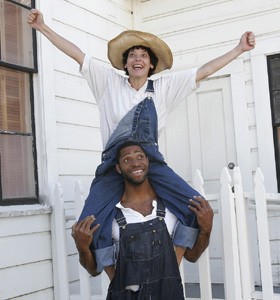 The Marin Theatre Company opened its 2005–mdash;2006 season so spectacularly with September’s world premiere of the exquisite River’s End that some regular theatergoers feared MTC might have blown its creative wad right out of the gate and would not be able to meet that level of excellence again this season. With the unveiling of MTC’s newest show, Scott Kaiser’s Splittin’ the Raft, director Danny Scheie has not only equaled the artistic success of River’s End, he’s surpassed it, easily making this one of MTC’s best seasons in years, and that after only two shows.

The second of three world premiere’s planned for the season, Splittin’ the Raft further defies expectation by turning out to be a whole lot more fun that it originally sounded. From its description, Kaiser’s play–a retelling of Mark Twain’s classic and controversial Adventures of Huckleberry Finn, as deconstructed by the great abolitionist and former slave Frederick Douglass–looked to be a serious, largely literary enterprise, one that would make up in intellectual bravado what it would probably lack in humor and old-fashioned entertainment.

That Raft is anything but a solely serious exercise should not be surprising given that Kaiser (head of voice and text at the Oregon Shakespeare Festival) is the guy who, two years ago, took Shakespeare’s boring three-part Henry VI series and transformed it into a thrilling, double-dealing pot-boiler of Dallas-like proportions. Though Splittin’ certainly does not skimp on intellectual gymnastics, and conjures several moments of profound emotional power, it also features a wild, high-energy parade of jokes, gags and boldly silly anachronistic flourishes.

The show takes place on scenic designer Kate Boyd’s eye-pleasing, classroom set with a massive wall of knickknack-crammed bookcases filling every inch of the background, an assortment of desks, slide projectors and costume racks dotting the periphery, and a bright red twirl-a-whirl at center stage. True to the original title, the show begins with Frederick Douglass (Aldo Billingslea) perusing a fresh copy of Huck Finn, personally signed to him by Mark Twain, as a trio of students watch.

In a blink, the cast members begin taking on characters in Twain’s epic river journey, with Billingslea snapping back and forth between Douglass–who adds dimension and context to the story by reciting appropriate passages from his own autobiography–and the fictional, escaped slave Jim. Though all four cast members take turns narrating, each delivering the first-person words of Huck Finn, Huck himself is embodied by the lithe and energetic Kate Ross, a Jody Foster look-alike with the same knack for focused intensity.

Karen Aldridge and Mark Farrell don numerous costumes and occasionally swap genders in taking on all the other roles: the passive-aggressive Widow Douglas; the iconic “mean drunk” Pappy Farrell; Tom Sawyer; a soft-shoeing slave trader; and those consummate con men, the King and the Duke.

The notion of combining Huck and Jim’s journey with the words of former slave Douglass is an ingenious and powerful idea, the pivotal invention in a play overflowing with ideas, packed with creative theatrical innovations and stuffed with gags (some that work, some that don’t). The cast works together in playful ways to bring every detail of the story to life, employing oddball props, acrobatics, outsized comedy schtick and even bits of mime to paint the picture (think Godspell without the clown garb and Episcopalian rock anthems).

Such strenuous activity and crazy (sometimes crude) sight gags could have ended up in a major Twain wreck, but Scheie’s steady vision, Ross’ tender interpretation of Huck’s religious and social evolution, and Billingslea’s dignified portrayal of the real-life ex-slave keep the story on the ground, and on the river, where it ultimately stands as a grand rebuke of the cruelty that often drives society, and a celebration of the human potential to transcend that cruelty.

That Raft can do that and also inspire belly laughs is a remarkable example of clever, compassionate–and achingly relevant–theatrical magic.