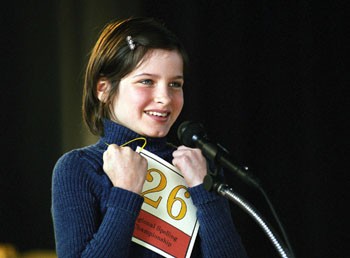 F-A-C-I-S-M: Sweet Flora Cross stars as a spelling champ. (Be sure to read ‘Talking Pix’ all the way through this time.)

‘I hope I’m not disappointed with this movie the way I was with Deer Hunter,” remarks Don Novello, the actor, author and comedian best known as Father Guido Sarducci. “There was hardly any deer hunting in that movie, so that was a big disappointment–but I’m really looking forward to all the little bees in Bee Season.”

The funniest thing about the line is that Novello has just delivered it to filmmakers Scott McGehee and David Siegel, the directors of Bee Season, which is most definitely not about bees. We’ve bumped into McGehee and Siegel while standing in front of the Sebastiani Theater in Sonoma, where Bee Season screened in early November as a fundraising event for the Sonoma Valley Film Festival, as we awaited the arrival of comedian, actor and winemaker Tom Smothers. When the older of the Smothers Brothers finally appears, he has his own line ready to deliver. “Bee Season–a whole movie about spelling bees,” he says, as we step inside. “It’s a horror movie, right?”

For Smothers and Novello, old friends and fellow dyslexics from the days of The Smothers Brothers Show on television, accusing Bee Season of being a horror movie is not far from the truth. Starring Richard Gere as a professor of religion who believes that his spelling-champion daughter (Flora Cross) might be tapping the well of ancient Jewish mysticism in order to see letters in her mind, the film tells of a broken family’s quest for God, but ultimately it comes down to a series of high-pressure spelling bees–with a lot of spelled-out words.

“For me, whenever people start spelling in a spelling bee, it’s like they’re speaking a foreign language,” Smothers says later, as we commandeer a table at a nearby bistro. “Are you that way too, Don?”

“They could’ve misspelled every word and I would never have known,” Novello agrees.

“I have to ask: Did it bug you guys the way the girl approached those spelling bees,” I say, “where she’d close her eyes and wait for God to send her little magical clues–butterflies and vines and magical birds and things, flying around spelling out the words. I don’t think God should be allowed to help contestants in a spelling bee.”

“I agree! You’re so right, man, she was cheating,” says Novello. “She wasn’t even that good a speller. The magical butterflies showed her how to do it. I’m surprised that using God to spell your words for you isn’t against the rules.

“For me, school was all about memorization and not enough about creativity,” he continues. “To say that spelling well makes you a special person–that’s bullshit, you know? I might not be able to spell bullshit, but I can recognize bullshit when I see it.”

“At the very opening of the film, I wanted to give you a nudge,” Smothers tells Novello, “when the woman says, at the spelling bee in Oakland, ‘You people are the best, because you’ve beaten all the others to get here today,’ and I wanted to say, ‘They’re the best? What? Because they can spell?’ That really pisses me off.”

“I like this movie, now that I look back on it,” says Smothers, “but there for a while, in the middle, I just got so angry at this family. The wife is upset and acting weird, and the boy is unhappy and feeling alienated, and the father is only interested in reaching God. He has no idea what his own family is doing.”

“I think a secular family would’ve been more loving,” suggests Smothers, “more loving than this family that was busy looking for God and spiritual experiences.”

“They had no warmth, man,” says Novello.

“You know what I think? I think it’s because they were religious that they had no warmth,” Smothers says. “Really! If they had been secular instead of religious, they might have been hugging each other and talking to one another. Maybe that’s the bottom line of this movie–those who seek God are not godly, because in seeking, you manifest your godlessness.”

“Yeah,” Smothers replies. “It’s the same reason that emotionally needy men never get laid at parties. They want it too bad, so they never get it. In a very subtle way, I think this movie is a shot at the hardcore religious right. But in this fascist totalitarian world we live in now, the humanists and liberals can’t just stand up and shout the truth, they have to make movies that are so nuanced and subtle that we have to sit in this fucking bar and gradually figure out what the filmmakers were maybe trying to say. Do you think that’s what this movie is trying to say, Don?”

“Actually, I think it’s saying that spelling is another form of fascism,” says Novello.

“Oh, my God!” Smothers shouts. “Did you just say that spelling is a form of fascism? That should be on a bumper sticker. That’s beautiful!”

“Yeah, man,” Novello laughs. “It’s true. Spelling is a form of fascism. And spelling bees are fascist exercises. Those who can’t spell, those who can’t quote the party line, are metaphorically taken out and shot.”

“Yeah, I think it is,” says Novello. “But you know what? In the end, there weren’t any bees in it. There were butterflies and birds and God–but no bees. I’m still kind of pissed off about that.”