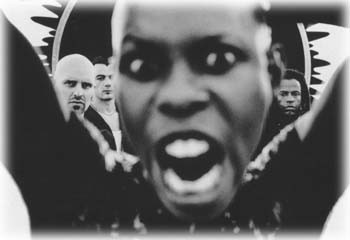 Skunk Anansie
Stoosh (Epic)
BRITAIN’S SKUNK ANANSIE is a punk-metal band led by a black female named Skin, so its very presence on a major label adds to its political statement. Its 1995 debut Paranoid and Sunburnt was adamantly political, and not merely because the lyrics railed against racism and piety–Skin deserves attention because she repossesses ferocious metal from white males and tweaks the feminine topics of the neo-folk poet grrls. These basic virtues seem diminished on Skunk Anansie’s follow-up release Stoosh. Veering away from the punk-funk of Rage Against the Machine and into the trip-hop textures of Portishead, the band scores points for being unpredictable. The letdown isn’t the softer sound, but the lesser songs. Skin won’t impress anyone by writing about tortured romance, and the few “message songs” like “Yes, It’s Fucking Political” simply lack the debut’s incisive reach. Still, Skin’s whole idea with Skunk Anansie may be expectation reversal; so perhaps it’s appropriate that the most socially sensitive new track is “Pickin’ on Me,” a slow acoustic number.
(KARL BYRN)

David Byrne
Feelings (Luka Bop/Warner)
THREE YEARS AFTER his much-touted eponymous return to the spare and twitchy style that he forged during the ’70s as headman of the Talking Heads, David Byrne is back with a nearly perfect synthesis of pop and world music. Feelings is Byrne’s least self-conscious attempt yet to fuse the two influences, ranging from straight-ahead rock to Brazilian samba. Recorded at home studios in a variety of international cities and in collaboration with the likes of Devo’s Mark Mothersbaugh, Feelings is an often engaging experiment that works, well, at least most of the time. Byrne–obviously having a helluva good time–deftly blends samples and shows that the master has a few tricks to teach Beck and other trip-hop happy studio freaks on the current pop scene. His use of pop star Paula Cole and R&B diva Betty Wright (“The Clean-up Woman”) as back-up singers is inspired stuff. And who else can combine Cajun fiddle and sitars in an ambitious track that just seems so right?
(GREG CAHILL)

Robert Cray
Sweet Potato Pie (Mercury)
IN THE HIT-ORIENTED, star de jour world of modern pop music, bluesman Robert Cray is something of an oldies act–his only bona fide Top 10 hit, “Smoking Gun,” burst onto the pop charts a whopping 11 years ago. But rather than try to replicate that unexpected success, this purveyor of stiletto-sharp guitar riffs and dreamy, someone-done-somebody-wrong songs over the years has quietly continued to refine his craft, putting his imprint on a distinctive sound that resonates with the tuneful gospel and soul of mentor O. V. Wright, all bolstered by those phat Memphis Horns. Sweet Potato Pie–sweet and sticky? Not on your life, but a real treat nonetheless.
(G.C.)

Neil Young & Crazy Horse
Year of the Horse (Reprise)
GRUNGE GODFATHER Neil Young has about a million hours worth of outtakes and live concert material in the vault, and he plans to release a lot of it in the next couple of years. Meanwhile, this soundtrack to a new film chronicling the hippie icon and his favorite band on the road is yet another lo-fi, feedback-frenzied foray into the ozone squall still crackling with the raw power of 1991’s blistering Arc/Weld. If you prefer to bathe in the light of the Harvest Moon, sit this one out.
(G.C.)