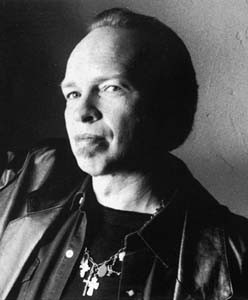 IT’S A THIN LINE between love and hate. Ex-Blaster-turned-roadhouse philosopher Dave Alvin straddles that nether region of heart in a loosely knit concept album. Alvin breathes life into a series of vignettes featuring a working-class cast of the love-struck and the love-lorn. Incest, infidelity, and the infinite possibilities presented by hitting the highway inform these little morality takes, all seen through the sweet sentiment of a whiskey haze. Not as immediately catchy as 1996’s King of California, but well worth the visit.
GREG CAHILL

AMBIANT soundscapes and hybrid grooves may be all the rage, but the straightforward singer/songwriter is very much alive. Gerald Collier and Josh Rouse have made impressive debuts in this field. Both Gerald Collier and Rouse’s Dressed up Like Nebraska employ spare, shuffling folk-rock and personal, yearning lyrics, with ringing guitar attempts supporting up-front vocals. Collier has more of an urban rocker’s instinct, with heavier, stinging arrangements, a Pink Floyd cover (“Fearless”), and a propensity to shout. Rouse tends toward softer musing and strumming, with delicate string parts and a more plaintive, sometimes countryish feel. Both artists find strength in the classic confessional mode of the singer/songwriter, where each shares his attempt to make peace with the past. Collier has made more progress, taking a cavalier comfort in his fall from grace, but the cost has been losing touch with feelings (“My tears are so bored they won’t come down”). Rouse, although stuck in sentimental memory, has a sure footing–he knows better than to abandon “the common thread that wound from me to you.”
KARL BYRN

FORGET everything you know about so-called alternative country. These bands on the Chicago-based Bloodshot Records–the same guys that gave us 1994’s ass-kickin’ anthology For a Life of Sin: A Compilation of Insurgent Chicago Country and the follow-up CD Nashville: The Other Side of the Alley–tear up a shitstorm of trouble that leaves BR5-49 and their ilk chokin’ in their exhaust. The Sadies bill themselves as a feral, guitar-crazed cattle drive through Malibu and the Motor City. They are a junkyard-dog band that unleashes a ferocious blend of spaghetti Western soundtracks, surf, and rabid monkey swang! It’s Iggy Pop and the Stooges-meet-the Stanley Brothers at a beer-and-sweat-stained biker bar. Meanwhile, Split Lip Rayfield–the three horsemen of the bluegrass apocalypse–are hell-bent on firing up their scorched-earth brand of hillbilly mayhem, delivering white lightning-fast guitar picking and banjo strumming, and–get this!–that ain’t no bass gittar, baby, it’s a one-string incendiary device made out of a Ford truck gas tank and a weedwhacker string. Alternative country? Get out of town… .
G.C.

FOR 20 YEARS, harmonica man Mark Hummel has been a staple of the Bay Area blues scene–an accomplished journeyman who has built a solid reputation with his gritty Chicago-style harp playing and a sure-footed command of the idiom. Low Down to Uptown finds Hummel at the peak of his powers. With a guest roster that includes the legendary Charles Brown on keyboards and East Bay singing sensation Brenda Boykin, Hummel crafts a toe-tappin’, heart-poundin’ set of sizzling swing and infectious jump blues. Catch him in the act on Saturday, Aug. 15, at 9 p.m. at the Mystic Theater, 21 Petaluma Blvd. N. in Petaluma. Tickets are $5.
G.C.

Ernest Ranglin
In Search of the Lost Riddim (Palm)

HE IS BEST KNOWN in reggae circles as the man who taught Bob Marley how to play guitar, but Ernest Ranglin’s contributions to the world music scene are legendary. As a member of the Blues Blasters, Ranglin became a fixture on the 1950s shuffle boogie scene. Later, as guitarist for the seminal Skatalites, Ranglin helped create the upbeat sound that launched three waves of modern dance music. On his latest release (one of the first on the new Palm label, headed by former Island Records chief Chris Blackwell), Ranglin journeys to Senegal in search of the percolating rhythms that inform ska. The result: some of the most tasteful jazz-style riffs ever laid down to shimmering high-life beats. The ultimate summer world-music album. On board is a host of top African musicians, including labelmate Baaba Maal, the Senegalese guitarist and vocalist whose latest CD offers sometimes introspective, often powerful lyrical insights into the soul of the continent.
G.C.

Nov. 17: “A Christmas Story” at the Sixth Street Playhouse