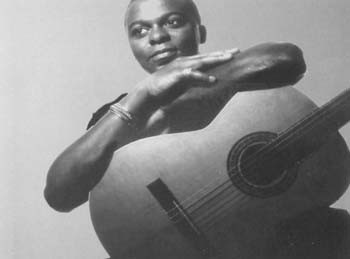 A NEW GENERATION of African singer/songwriters is making its mark on the world. While the continent has been a major source for new musicians over the years–from the ebullient rhythms of such Nigerian high-life artists as King Sunny Ade to the soulful choral arrangements of Ladysmith Black Mambazo to Fela’s techno grooves–these new artists are working a slow, bluesy style known as morna (which means “mournful”), whose best-known practitioner is Cape Verdean singer Cesaria Evora. True to form, Henri Dikongue’s C’est la Vie is an evocative collection of mostly acoustic songs, describing the personal costs wrought by the political turmoil of his civil war-torn homeland of Angola, all cloaked in jazzy Latin spices and haunting bossa nova beats. It is simply one of the year’s finest world music recordings. Newcomer Fantcha–a Cape Verdean and protégé of Evora’s–also evokes a tender, forlorn demeanor in songs rife with lost loved ones and a sadness for the poverty and social strife of her island nation. Together, these highly personal recordings–both distributed by the Rohnert Park-based Tinder Records–bear melancholy testimony, with no hint of bitterness or polemic, to the aftermath of colonial power. Highly recommended.
Greg Cahill

ALPHA WAVE ALERT! For 15 years, Lisa Gerrard has been responsible for often mesmerizing–and sometimes tedious–gothic-folk music, both as a member of the obscure London-based duo Dead Can Dance, whose moody psychedelia is cut from the same cloth as the Cocteau Twins, and as a solo artist. This disc finds the Australian native full of transcendent song, inspired by Sufi chants, the early Christian compositions of 12th century mystic Hildegard von Bingen, and other high sources. Sparse acoustic arrangements, otherworldly vocals, Middle Eastern instrumentation, and lyrics that sound as though Gerrard is speaking in tongues–pop music doesn’t get more haunting than this.
G.C.

IN THE WAKE of Nirvana drummer David Grohl’s success with the Foo Fighters, the immediate future of grunge seems to be solo projects. Singer Scott Weiland of Stone Temple Pilots finds a winning techno sound on his new solo debut while guitarist James Iha of Smashing Pumpkins pursues a flat soft-pop sound on his outing. By contrast, Alice in Chains guitarist Jerry Cantrell doesn’t shed his skin on Boggy Depot. Instead, his new solo debut echoes strengths he already has shown with the Seattle heavies. Here, Cantrell is focused on a sparse, grinding gray area between unplugged, bluesy drift and sweet pop-metal crispness. Boggy Depot finds Cantrell with a personal voice that’s not divorced from the dark, edgy core of his former band. Like before, Cantrell uses tough riffs to fashion gloom into pop as he moves along.
KARL BYRN

OKAY, mainstream press claims that ska is the Next Big Thing, but diehard fans know this infectious Jamaican beat never went away, thanks to such New Wave-era British two-tone bands as the Specials and Selector and, more recently, acts like the Mighty Mighty Bosstones. This 21-song salute to “real, authentic” ska compiles upbeat dance tunes from the Treasure Island Studio vault and includes early-ska hits by Don Drummond and the Skatalites, Duke Reid and his group, and Justin Hinds and the Dominoes. Deep catalog stuff for serious collectors–and well worth the search.
G.C.

THE TEXAS BLUES tradition has spawned some powerful guitarists over the years, starting with T-Bone Walker and culminating with the late Stevie Ray Vaughan. Lots of folks are trying to lay claim to the mantle unworn since Stevie Ray’s untimely death, and Kubek certainly deserves a nod for delivering crunchy take-no-prisoners power blues that is as hot as a Saturday night special. The result is some of the baddest blues axe since Ronnie Earle’s greasy solo debut. Vocalist and rhythm guitarist Bnois King comes along for the ride, and legendary bluesman Little Milton makes a guest appearance (as does ex-Nighthawk guitarist Jimmy Thackery). But Kubek is in command all the way–no apologies offered.
SAL HEPATICA

FOR HIS SECOND full-length album since his debut two years ago, Dan Bern ups the ante considerably on his in-your-face brand of postpunk-folk-rock. With the assistance of producer/collaborator Ani DiFranco, the singer-songwriter has moved far afield of the “new Dylan” comparisons, supplying frequently outrageous but ultimately compassionate observations on our times. From his opening song, “Tiger Woods”), with its declaration “I got big balls,” to the revolutionary “No Missing Link,” with its aliens-mated-monkeys sexual theorizing (to paraphrase politely!), the farcical humor of his delivery resolves any reservations about his upfront manner. In lesser hands, this approach would risk a “look-at-me” grab for attention, but the very discipline that may at first seem lacking in Bern’s songs enables him to transcend the mundane and provide a unique perspective on these themes. Bern is carving out a niche that is well worth investigating.
TERRY HANSEN