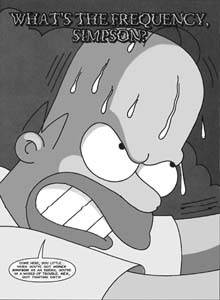 Animation director Dave Silverman talks about life with ‘The Simpsons’

JAMES FALLOWS, the heralded cultural critic and editor of U.S. News and World Report, was only being half-facetious when he called The Simpsons “America’s premier cultural product of the late 20th Century.”

And for nearly 10 years (more, if you count the filler material on The Tracey Ullman Show, where the irreverent cartoon characters made their TV debut) animation director Dave Silverman has been one of the prime forces behind the Simpsons’ success and continued level of quality.

Silverman’s long-running involvement with the show is even more remarkable when one considers the almost haphazard manner in which he joined the enterprise. “It was very matter-of-fact,” says the UCLA graduate, who has been winning awards for his animation since high school. “My friend Wes Archer [a fellow animation director] was working for Klasky-Csupo, and he asked me if I wanted to come in and work on this new animated concept by Matt Groening called The Simpsons.

“A lot of companies bid for the Simpsons job,” he continues, “because we all loved ‘Life in Hell’ [Groening’s long-running alternative weekly comic strip] and were excited about translating his stuff to animation. That whole year of 1987, three of us were having to do all of the drawing for these minute-and-a-half sketches [at 24 frames a second, that’s several hundred drawings], not even knowing if Fox was gonna pick up The Tracey Ullman Show.”

The Fox Network did pick the show up, of course, and the Simpson characters gained more exposure in a popular series of short cartoons for movie theaters and in a TV ad campaign for Butterfinger candy bars. “There was no indication how big the Simpsons would become when we were on The Tracey Ullman Show, because that program never really found its audience,” says Silverman. “I first realized it shortly after the first episode aired [‘Simpsons Roasting on an Open Fire,’ directed by Silverman, aired Dec. 19, 1989, as a decidedly non-Charlie Brown Christmas special]. I was back in Maryland, where I’m from, walking around a shopping mall, wearing a Simpsons crew jacket. And people from all walks of life kept approaching me, asking me where I had gotten the jacket and where they could buy one, and telling me how much they liked the show. And this was after only one episode had aired.

“So I went back to California and said, ‘Look, Matt, I think we really have a hit on our hands here.'”

Not that maintaining quality has always been easy. One famous Simpsons episode gleefully parodied the network interference that often takes place with long-running shows, as corporate executives order the team that produces “The Itchy and Scratchy Show” to introduce a new talking dog named Poochie.

“Not a lot of people know it, but that episode was based on something that happened to us,” recalls Silverman. “The Fox people one year wanted us to add a new character to The Simpsons family to generate more interest. A wacky relative or something like that.”

Aside from being a cultural achievement in its own right, the success of The Simpsons also changed the landscape of television by convincing networks and cable companies that animation was a viable format. Sure, The Simpsons spawned such short-lived duds as Family Dog and Capitol Critters, but it also paved the way for hip, successful series such as Fox’s King of the Hill, and MTV’s popular shows Daria and Beavis and Butt-head, and even Comedy Central’s controversial South Park.

It’s hard to remember that innocent little Bart Simpson was once considered the greatest threat to the moral character of America’s youth, long before “Heh-heh-heh” and “Oh my God, they killed Kenny!” became national playground catch phrases.

“I like King of the Hill and South Park, and one of the main reasons I like them is because they’re successful,” Silverman explains. “Each time an animated show is a hit, it convinces executives to invest in the medium, and that’s good for the entire art form.”

LIKE OTHER Simpsons alumni, Silverman has of late branched out into other projects. “I was hired as co-director on the Dreamworks animated film The Road to El Dorado,” he says. “It’s a comedy/musical adventure, and the songs are by Tim Rice and Elton John, the team behind The Lion King‘s music.”

But Silverman ended up leaving the Dreamworks project over the same “creative differences” that seem to afflict many a major rock band, and he’s currently in the midst of a well-earned vacation. “Matt’s creating a new series called Futurama, which he wants me to work on,” says Silverman of his future plans.

“And just recently Pixar [the Richmond-based, Steve Jobs-owned computer animation house that produced Toy Story] called and asked me to come up and work for them. I’m having a hard time deciding what to do.”