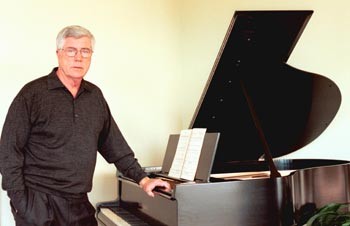 Calling the tune: Philanthropist Don Green has contributed his name and money to a proposed state-of-the-art concert hall at SSU that critics say is too ambitious.

But it now seems that the project’s promoters may have aimed too high and reached too wide. As cost estimates rise and the economy plummets, criticism of the ambitious facility is increasing.

New calculations put the cost of building the Green Music Center, which is modeled on the famous Tanglewood Music Center in Massachusetts, at $48 million rather than the earlier estimate of approximately $40 million. The latest news is that the opening of the facility will be delayed at least another year, until 2004.

A groundbreaking ceremony for the center took place last October in an atmosphere of great optimism. But the concert hall site, a 53-acre field at the intersection of Rohnert Park Expressway and Petaluma Hill Road, still remains empty apart from a “Future Home of” sign.

“We can’t start work on the actual building until all the funds are committed,” says Jim Meyer, Sonoma State University’s vice president of development. “We still need another $19 million to begin construction.”

After factoring in contractor and engineering costs, Meyer says, the price of building the center has actually increased by $12 million from the architect’s original estimate.

Center boosters have approximately $27 million committed to the project by donors, but they are scrambling to find the money needed to complete the project as the once red-hot telecom industry-fueled economy continues to slide.

“While the cost [of building the center] went up, the economy went in the other direction,” Meyer laments. “It’s difficult for people to give. A lot of our gifts were stock gifts, and stock is down from a year or two ago. The economy is not as bright or encouraging as it was.”

The initial $10 million seed money for the project was donated by Telecom Valley tycoon and philanthropist Don Green and his wife, Maureen–hence the acoustically advanced facility’s name.

Ever since that donation, both SSU and the Santa Rosa Symphony have been involved in energetically raising funds. In more prosperous times, the campaign included trips to Tanglewood for Sonoma County arts patrons and receptions held at homes around the North Bay for potential donors. Many of those who have kicked down money so far have been involved in the telecom and wine industries. But those donations came before the economic slowdown.

Meyer says that Santa Rosa Symphony conductor Jeffrey Kahane and its conductor laureate Corrick Brown will soon kick off a new fundraising “Conduct-or’s Campaign” and are looking for donors for a challenge gift scenario.

“[The economic climate] has made us look at the possibility of phasing the building in two pieces,” Meyer says. He adds that construction on a 1,100-car parking lot, roads, and a bridge way (funded by parking bond monies) will begin in a month or so. Even so, the music hall won’t be opening its doors any time soon.

Meanwhile, the Festival on the Green, three outdoor summer music events on campus featuring the Santa Rosa Symphony and jazz, is offering trial runs aimed at building an audience and laying the groundwork for a major summer festival when the music center opens. While the July 4 concert attracted 3,500 people, not everyone is caught up in the festival frenzy.

“The festival is held on the commencement lawn near lots of buildings, and it’s all very pretty with lots of activity, and it generates the impression that this [center] is going places, but I don’t know for how long,” says Rick Luttmann, an SSU professor of mathematics since 1970 and chair of faculty for the upcoming academic year. “The longer [the project] gets postponed, the more skeptical the community is going to be on whether it will happen.”

And Luttmann adds he has even more reason for concern if the center comes to fruition. “I’m a music lover and I’d like to see this happen, but my concern is we may not be able to afford it and we may do serious and irreparable harm to the rest of the university,” he explains.

Luttman adds that he speaks for many members of the faculty who have also voiced concerns about the Green Music Center’s operating expenses to administrators.

“The goal is for the hall to eventually be self-supporting, but from estimates I’ve heard, it may take 10 years to get to that point,” Luttmann says. “The staffing and other costs to run the center have to be met by our current budget. And we already have problems making ends meet.”

When asked about opposition to the center, Meyer says the main concerns he’s heard are from individuals worried about additional traffic flow in Cotati.

Even with a tough fundraising time ahead, Meyer says the project won’t be downsized or downgraded in any way.

“A music hall without perfect acoustics is a waste of money,” he scoffs. “It costs more to do things first class, and this is a first-class hall. We’re going first class, and yes, it may take a bit longer. But Sonoma County has survived without this for many years, and a year more won’t make a difference.”