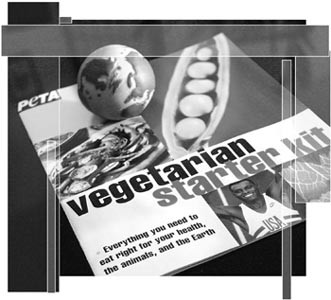 One American responds to food reforms

HEY, ALL YOU dieticians and researchers and activists. Listen up. I’m the one you’re not reaching. I’m the one in the middle of the bell curve that gets your information and doesn’t do anything with it.

I’m a pretty average American, perhaps even more than I care to admit. The strongest influence in my nutritional development was the food pyramid, with its cartoon pictures of bread and cheese and veggies. In the face of the nutritional neuroses of the week–sodium, fat, cholesterol, fiber, essential fatty acids–I remain fairly indifferent. And when it comes to postmodern food issues, things like ethics, environmental conservation, global economy, social responsibility, well, there are some things you should know.

You Say Compelling, I Say Compartmentalize. “Our theory is, if you put the information into people’s hands, most people will switch over, or at least consider it,” says Sean Gifford, vegan campaign coordinator for PETA, or People for the Ethical Treatment of Animals. PETA has traditionally relied on up-close pity pictures of half-dead animals to make its points about animal rights. That graphic sensibility remains a strong component in PETA’s Vegetarian Starter Kit, a 23-page booklet that the group began distributing about a year and a half ago. “We really try to paint the picture for people,” Gifford says. “We want to be a window into the world of animal suffering.”

Personally, animal suffering wasn’t the reason I had eaten vegetarian for two years a while back. I was just going along with my best friend, and the regimen actually lasted, until an unexpected encounter with some leftover sweet-and-sour pork in the staff room. Since then, I’ve had a twitchy subliminal sensibility about eating animal products, a heightened awareness paired with an unrepressed appetite. We humans have an infinite capacity for separating what we know from what we want.

Keep It Simple, Stupid. I don’t want to do a lot of research. This is a weak spot in the American psyche that the National Audubon Society addresses with its Fish Scale, a bar graph with gradations of color from green to yellow to red that tells you how endangered that filleted fish is. The scale fits on a wallet-sized card, which can accommodate about 25 popular seafood items. “All this seafood is available in the market, sold legally, and seemingly abundant, so people think the fish must be doing OK,” says Mercedes Lee, assistant director of Audubon’s Living Oceans Program.

“But some are doing better than others. The key is to know the difference.”

The back of the card has a ton of background information, gathered by the Living Oceans Program and published more fully in its 120-page Seafood Lover’s Almanac. Each fish species is evaluated by its management record (how is it being caught?), habitat (how is the health of its home environment?), and level of by-kill (are other kinds of fish being caught up in the process?). By these criteria, red on the fish scale equals poorly managed, lots of by-kill, and depleted environments, while green signifies a well-managed fishing program has a low by-kill and is easy on the environment–eat up!

THE MAIN POINT here: I want to retain my right to make the choice, but I want someone else to do the research and color-code it for maximum efficiency. Red means stop, green means go!

It’s a Sea of Information, and I’m Drowning. Some food issues will never boil down to a card. There’s just too much information, and at the same time not enough. Greenpeace’s True Food Now shopping list is a great example, a real masterpiece of paranoia-inducing overload: the list of food products containing genetically modified ingredients prints out at over 40 pages.

The one thing that might simplify the issue–mandatory labeling of GMO-containing products–is nowhere near happening in the United States. The FDA has a proposal for language to be used about GMO ingredients or products, but Charles Margulis, genetic engineering specialist with Greenpeace, says it’s just going to be another hurdle for organic producers. “The labeling guidelines are nonbinding, so food companies are still on their own,” says Margulis. “They’re not going to set label requirements, and they make it difficult to use non-GMO labels.”

The True Food Now list reveals one additional fact about eating “responsibly”: it can be expensive. Non-GMO foods are for the most part organic, making them more costly per ounce than their nonorganic counterparts. “Primarily [organic food] is an upper- and middle-class phenomenon,” agrees Margulis, “but that points back to government policies. The USDA spends $2 billion a year on research, and less than 2 percent of that research is relevant to organic farmers.”

Fine. It’s the government’s fault that organic milk is almost twice as expensive as conventional milk. I definitely buy that, even if I rarely buy the milk. Government conspiracy, environmental impact, think-globally-act-locally. Yes, yes, I know about this stuff. But let me tell you, as an average American, when everything else is too much to deal with, I eat based on flavor, cost, and the amount of energy I have to expend in getting the max of one and minimum of the other. It’s a complicated formula that’ll give you a different answer not only from person to person, but also from day to day for the same person.

Me? I buy organic produce–locally grown, when possible–but for soup I’ll buy a national brand with GMO soy filler and not even blink twice. I’ll ask whether the catch of the day was really caught that day, but I usually forget to ask where and how it was caught. Sometimes I’ll eat vegetarian dishes, but I like the taste of meat, preferably from free-range animals, but I can’t always afford it, and I don’t even bother to pressure my favorite barbecue joint about it.

That last run-on sentence pretty much says it all. And to top it all off, I have a rebellious streak a mile wide. So, food reformers of America, go easy on me. Make your suggestions, send me your booklets, but leave it at that.

Or you’ll lose all the progress you’ve made, and I’ll just go back to the food pyramid.

So you say you want to know more about your food supply? OK, but start small. You could end up an activist, or you could just burn out.

www.goveg.com All the information from PETA’s Vegetarian Starter Kit is here, from photos of penned pigs to recipes for cheeseless pizza. If you’re addicted to hard copy or don’t have Internet access, call 888/VEG-FOOD.

National Audubon Society’s seafood wallet card and seafood guide can be downloaded here in Acrobat format. Or call the toll-free number to receive the materials by mail: 888/397-6649.